Fronts Storm Back but Fish Wiggle Off the Line Late 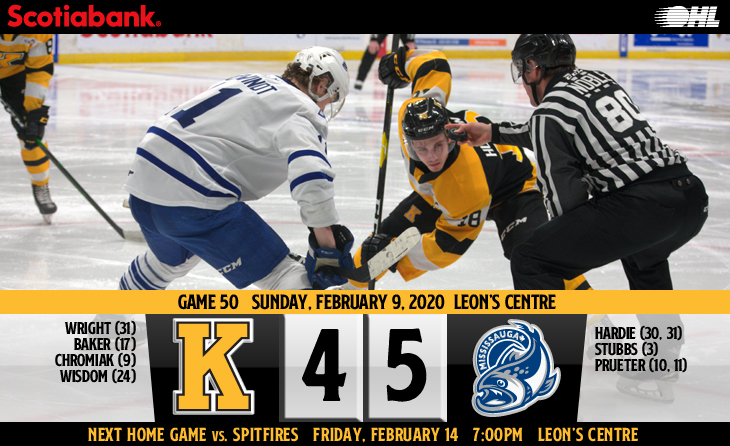 After a couple of weeks of playing catch up, the Frontenacs were in a position to jump into the eighth spot in the Eastern Conference with a win on Sunday afternoon. Their opponent, the Mississauga Steelheads, were looking for a bounce back performance after losing 7-1 in Kitchener on Friday night. Sunday’s game was the final meeting of the season between the two teams. Kingston had won 2 of the 3 previous meetings.

Kingston has struggled to put a complete 60-minute game together over the last few weeks, and that continued Sunday afternoon. They had more shots on goal in the opening period, but it was the Steelheads that took the early lead.

James Hardie took a cross crease pass from Nicholas Canade and fired the puck at the net. Christian Propp got a piece of the puck but it snuck through him and trickled over the goal line for the games opening goal. It was the only goal of the period sending the Frontenacs to the dressing room with a 1-0 deficit.

The early parts of the second period created issues for Kingston. The Steelheads scored three straight goals to break the game wide open.

Michael Stubbs was first to strike beating Propp on the blocker side with a strong snapshot giving his team a two-goal lead.

Aidan Prueter followed that goal with a pair of his own and they came against two different goalies. The first was a tap in rebound that chased Christian Propp from the net. The second was a similar goal, but Ryan Dugas nearly made the save. The Steelheads led 4-0 at the midway point of the game.

Despite trailing by four goals, the Frontenacs found a spark before the end of the period. It started when Martin Chromiak hit Shane Wright with a saucer pass giving him a clear shot that he used to beat Kai Edmonds to get Kingston on the board.

Kingston continued to push and was rewarded with another goal before the end of the period. Dustin Hutton dropped the puck for Dawson Baker who beat Edmonds between the legs. After the early period struggles, the late goals brought Kingston within two goals heading to the final period.

That momentum carried over into the third period and Kingston quickly got within a goal. It was a 4-on-3 power play goal off the stick of Martin Chromiak. He took a wrist shot from the point that beat Edmonds cleanly. Wright and Lucas Peric drew assists on the power play goal.

The Frontenacs had a glorious chance to tie the game a few minutes later. Multiple players poked at a loose puck in the crease with Edmonds down and out of position, but the puck slid just outside the post and the Steelheads maintained the lead.

With more pressure, the Frontenacs would find a tying goal late in the game. With Ryan Dugas on the bench Jordan Frasca sent a puck towards the net. It hit the skate of Zayde Wisdom, the post, and the back of Edmonds leg and found its way over the goal line. Kingston had fought back from a 4-0 deficit to tie the game.

Unfortunately, there was plenty of time for another goal to be scored, and the Steelheads took advantage. Thomas Harley took a point shot that hit a body in front and bounced to James Hardie. He had an open net and put the puck by a sprawling Ryan Dugas. The last-minute goal would be the difference giving the Steelheads a 5-4 road win.

Kingston will head to Oshawa on Wednesday night for a midweek road game before returning home for three straight home games next weekend. They host the Windsor Spitfires on Friday and the London Knights on Saturday. Both games are 7 PM starts. That is followed by the annual Family Day game on Monday against the Barrie Colts. That game has a 2 PM puck drop. Tickets are available for all three games at ticketmaster.ca.