The Kingston Frontenacs are excited to welcome the 2021 draft class 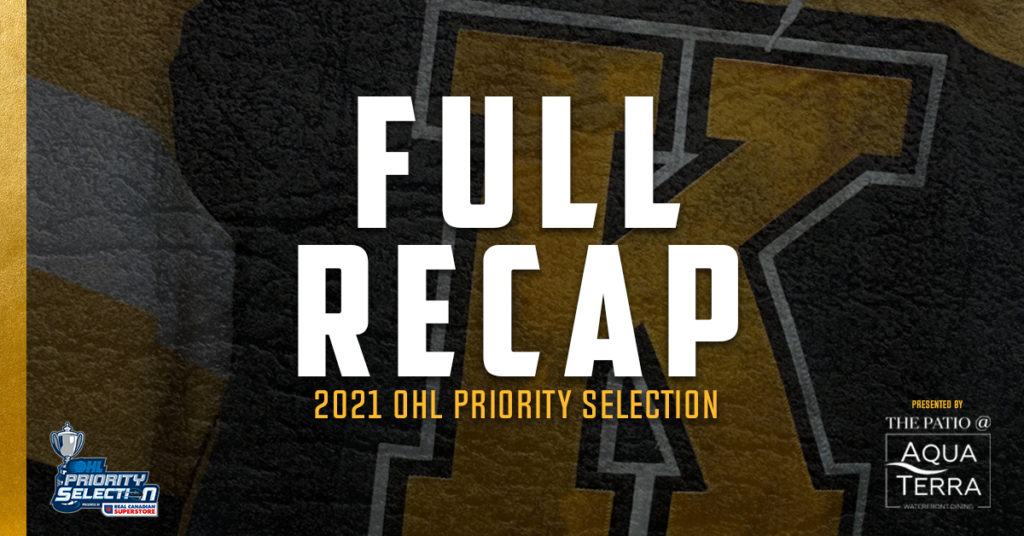 On Friday, June 4 and Saturday, June 5, 2021, the Kingston Frontenacs welcomed 15 new faces to the hockey club. With selections in every round but the 3rd, 6th, and 12th, the Frontenacs were able to bring together a group of players who could leave their mark on the team for years to come.

Kingston got started early on the first day of the draft, selecting forward Matthew Soto with the fifth overall pick. The team picked up another forward in Mitchell Brooks and defenceman Quinton Burns in the second round. Even without a third-round selection, the three picks in the opening two rounds set the table for another exciting day on Saturday.

“We want people that are competitive, and we put a lot of value into hockey sense, so for us, those are two top priorities in what we’re looking for in the players we selected and the program we want to build,” said McFarland about the newest Frontenacs draft class. “Any time you’re adding pieces to the puzzle, it’s an exciting day for us.”

Without a season, the first year of McFarland’s tenure in the dual coaching-general manager role was not how he expected it to go. However, the lack of on-ice competition allowed him and the Frontenacs staff to focus more on the 2021 OHL Priority Selection, ensuring that the players introduced to the program fit the mentality of the hockey club.

“We were able to spend a lot more time on the draft, so we tried to use every second that we had to organize and see as many players as we can,” McFarland waxed. “We’re very excited with the work that everyone put in, obviously our scouting staff put in a lot of time and effort this year under unique circumstances, so we’re very grateful to them for their efforts.”

Led by Head Scout Aaron Van Leusen, the Frontenacs picked from across North America while also selecting some of the top talents from Ontario.  Soto, who joined the Frontenacs ‘Fifth Pick Club,” comes from the Oakville Rangers. Meanwhile, the Fronts ventured out of province to the states of Illinois and Florida with forward Andrew Kuzma and goalie Michael Chambre, respectively.

In drafting Kuzma and Chambre, the Frontenacs add more skilled Americans to an already talented U.S.-born player pool. In 2020, Michigan’s Tommy Budnick became a member of the Frontenacs, and although he has yet to play, he was eager to venture north all season.

Kingston also has a rich history with past American players, highlighted in recent weeks by 2021 NHL Calder Trophy nominee Jason Robertson, who spent four seasons in the Limestone City.

With Chambre and Vaccari, the Frontenacs shore up the situation in the crease for potentially years to come. While Vaccari stands at 5’11” and 168 lbs, the Vaughan Kings U15 AAA netminder was unanimously voted by his GTHL peers as a goalie that they would start in an elimination game. Meanwhile, Chambre backstopped his Florida Alliance U15 AAA team to the 2021 Chipotle-USA Hockey National Championships.

“We made it our priority to get a goalie that we were very high on,” said McFarland. “Ultimately, as an organization, we’re excited about a lot of our guys, and hopefully, they can develop to be a part of our hockey team for years to come.”

Before pucks reach the goaltenders, opposing teams will have to get through the Frontenacs defence, which could also improve with more skilled prospects in the 2021 draft.

From nearby Smith Falls, Ontario, Burns may not have been able to play an entire season in 2020-21; still, the 6’2” and 170lbs played seven games with the Kemptville 73s U18 AAA program. McGowan’s speed stands out, and he showed that with the Markham Majors; meanwhile, Luddington is a physical player with great passing and offensive abilities. Topping the defensive draft class off with the 6’0” Siciliano of the Whitby Wildcats and the Quinte Red Devils’ Schneider, the defensive prospect system indeed improved in 2021.

The group of forwards that heard their name called by the Fronts are incredibly talented. With the likes of Soto, Brooks, Thibodeau, Cavallin, Kuzma, Dorion, Mallory and Keon joining the Frontenacs’ prospect pipeline, fans can get excited about celebrating eventual goals at the Leon’s Centre.

With the newest class of prospects all drafted, the focus now turns to helping each of the young men develop into the best possible people and hockey players they can be. “We’re going to hold some type of development camp, whether it needs to be virtual or in person,” said McFarland of integrating the picks into the Fronts’ systems. “The next step for us is educating all our prospects on what our program is about and what we expect them to continue to work on and grow over the summer to be ready for training camp in the fall.”

The last few days were exhilarating for the Kingston Frontenacs, as the franchise’s future got brighter with the addition of 15 new faces to the system. “At the end of the day, we’re all just excited to get back to playing games,” said McFarland. “I’m looking forward to our fans having the opportunity in the future to watch some of the players we selected over the last few days.”

Round 2 Matchup: Linseman Bracket
20 hours ago