Arcuri and Haché drafted in the 2021 NHL Draft 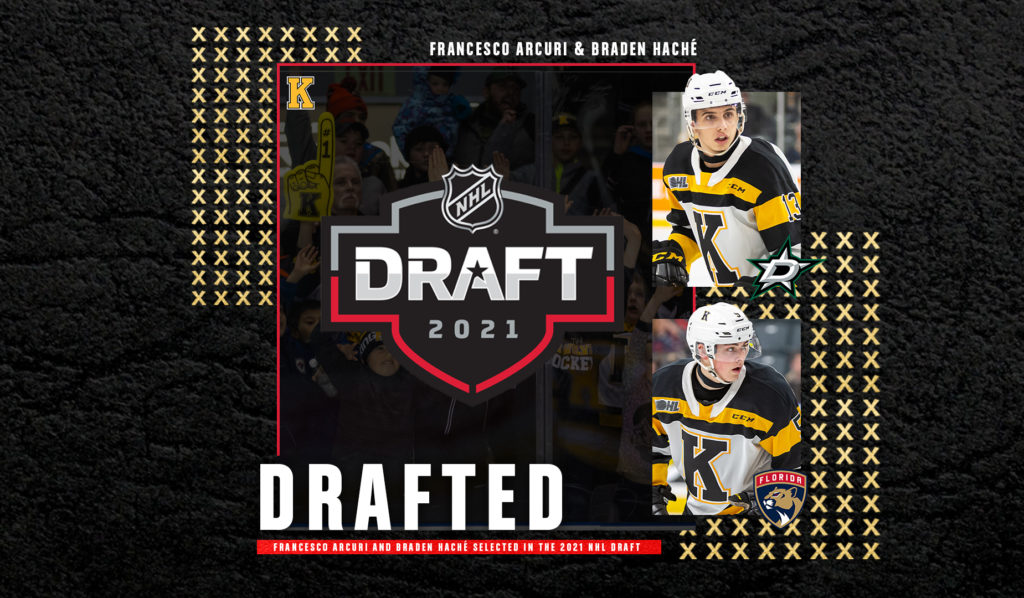 The 2021 NHL Draft has come to an end and two Kingston Frontenacs were fortunate to be selected into the league. Francesco Arcuri was selected by the Dallas Stars during the 6th round and Braden Haché was picked in the 7th round by the Florida Panthers.

Francesco Arcuri was selected by the Kingston Frontenacs in the 2nd round of the 2019 OHL Priority Selection. The 6’ 0” skilled forward was able to score 7 goals and 13 assists for 20 points during his rookie season. Arcuri made a name for himself as a shootout specialist during the 2019-20 season. He was a perfect 4 for 4 in shootouts and he proved to be a reliable forward when called upon in Kingston.

Without games at the Leon’s Centre during the 2020-21 season, Francesco Arcuri went on loan to Steel Wings Linz in the AlpsHL, a league that features teams from Austria, Italy and Slovenia. He joined his new AlpsHL team in January 2021. Arcuri played 18 games for the Steel Wings Linz and he was able to score nine goals and six assists for 15 points.

Braden Haché was selected by the Kingston Frontenacs in 4th round of the 2019 OHL Priority Selection. The 6’ 2” defenceman is very tough to play against in the defensive zone. Braden has shown that he thrives defensively, but he is also capable of playing in a variety of situations. Offensively, Braden was able to pick up 5 assists for the Frontenacs during the 2019-20 season.

Off the ice, Haché is making a positive difference in his community. He is always looking to put himself in a situation that will help others. Braden was the proud recipient of the 2020-21 Dayna Brons Honourary Award, which is presented each year to the most exemplary Hockey Gives Blood player ambassador.

The Kingston Frontenacs couldn’t be more proud of Francesco Arcuri and Braden Haché. We congratulate both young men on being selected into the National Hockey League and we look forward to their continued success on and off the ice.