Bonello Puts Up Stellar Performance in 3-2 Victory Over Ottawa 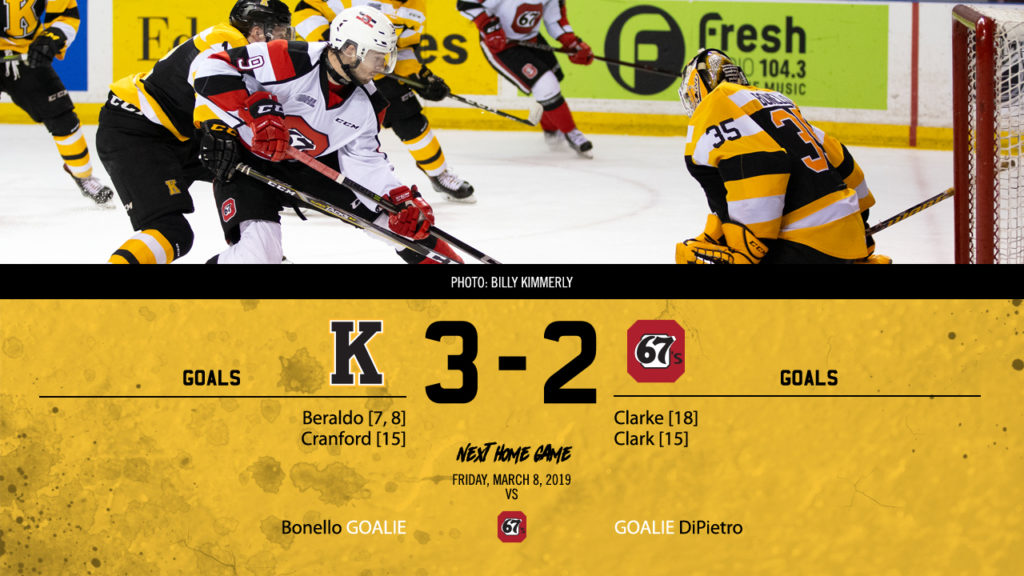 Regardless of position in the standings, rivalry games always bring out the best in both teams. The rivalry between the Kingston Frontenacs and the Ottawa 67’s is no different. Those rivalry games are fueled even more when two teams have met as recently as these ones did. Just 10 days ago the Ottawa 67’s defeated Kingston 4-2 on Leon’s Centre ice. Kingston was looking for revenge while Ottawa was hoping to keep an undefeated record intact against their division rival.

Ottawa started the game just as most expected, very strong. They directed 12 shots on goal in the period, but Brendan Bonello put up a wall in front of the Kingston net. When Bonello had an issue the Frontenacs defence was there to cover for him. Despite giving up 12 shots, it was a very solid defensive period for Kingston. That allowed them to grab a first period lead. With a single second left in a Marco Rossi penalty, Adrien Beraldo unleashed a rocket from the point that beat Michael DiPietro and went of the bar and in the net. That goal stood as the only goal of the period and Kingston took a 1-0 lead to the dressing room.

The Fronts had a strong start to the second period when Adrien Beraldo scored his second of the night. It was another point shot on the power play, but this time it was a wrist shot that beat DiPietro through a screen. The goal gave Kingston a 2-0 lead, but it also woke Ottawa up. They took control of the rest of the period and it eventually paid off. Graeme Clarke put his team on the board. He was credited with a goal that bounced in off Jake Murray’s skate in front of the Kingston net. Kody Clark then tied the game for the 67’s with a beautiful tip on a point shot off the stick of Lucas Peric. Ottawa outshot Kingston 12-3 in the period but the teams were tied 2-2 heading to the third.

Just like the third period in the previous meeting the Frontenacs would not go lightly. Ottawa continued to pressure Kingston, but Bonello stood on his head over the final twenty minutes. He made 15 saves in the period to bring his game total to 37 saves. That allowed the Frontenacs to capitalize on one of their scoring chances. Ian Derungs slid the puck to Ryan Cranford on an odd man rush and Cranford slid the puck into the Ottawa net to put his team ahead 3-2. With DiPietro on the bench for the extra attacker, Ottawa threw everything they could on net, but they could not beat Bonello. He and the Frontenacs held on to a 3-2 victory over the top team in the OHL.

The victory ended a long losing streak for the Frontenacs and gave them their first win over Ottawa this season. Kingston swept the 3-star selection with Bonello taking first star, Beraldo second and Ryan Cranford third.

Kingston now begins a lengthy road trip that sees them play 5 consecutive road games. They will visit Peterborough, Flint, Saginaw, Windsor and Peterborough once more before returning home on March 8th to host the Ottawa 67’s for the final time this season. That night will be Toronto Maple Leafs night and it will feature the game ops crew from Scotiabank Arena as they join the Kingston Frontenacs game ops crew for the evening. Tickets can be purchased at ticketmaster.ca.