Callens Scores his First but Fronts Fall to the Petes 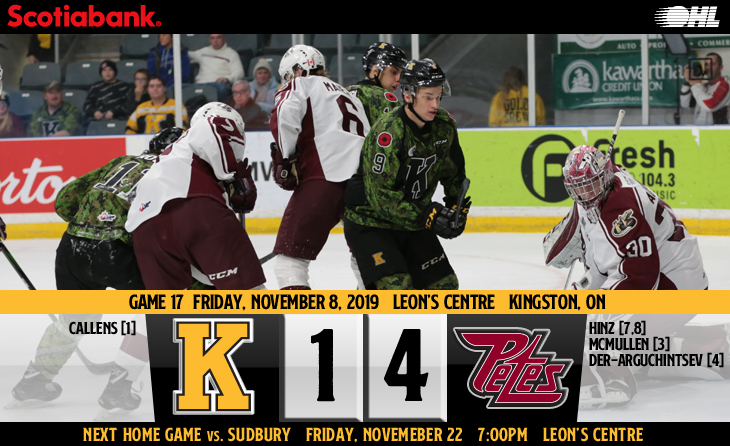 Every year on the Friday before Remembrance Day, the Kingston Frontenacs honour all the men and women who have served our country. Last season they started the tradition of honouring fallen soldiers as Honourary Captains. This year the team continued that tradition. Before the puck drop against the Peterborough Petes, Kingston added the names of Matthew Dawe and Robert Keiting to the banner that hangs at Leon’s Centre. They will forever hang at Leon’s Centre as a small token of the team’s appreciation for the sacrifice they made.

After the ceremony, the Peterborough Petes were the team that jumped on the scoreboard first. Brady Hinz fired a quick shot after a clean face-off win that beat goaltender Ryan Dugas. The Frontenacs were hoping that Tye Austin starting in the Peterborough net would be a welcome sight for them. He had struggled so far this season, but early indications were that he would be solid after making all 10 saves that Kingston fired his way in the opening period. The Petes led 1-0 after one period.

The second period would bring a memorable moment for one of the young Kingston Frontenacs. Maddox Callens tipped a Jakob Brahaney point shot at the five-minute mark. It slipped through Tye Austin giving Callens his first OHL goal. It also tied the game 1-1. It appeared that the period would end in a tie, the Petes struck late. Keegan McMullen beat the buzzer, scoring with just 2.2 seconds left to restore the lead for his team.

That goal seemed to give the Petes a boost heading into the third period. They controlled play and added two more goals to their lead. Brady Hinz scored his second of the night to make it 3-1. That was followed by the Toronto Maple Leafs prospect, Semyon Der-Arguchintsev, scoring his fourth of the season to make it 4-1. That would be the final score and the Petes took the second game of the home and home series.

The Frontenacs will play the next four games on the road. They don’t return to Leon’s Centre until November 22 when they host the Sudbury Wolves. Tickets are available at the box office or at ticketmaster.ca.