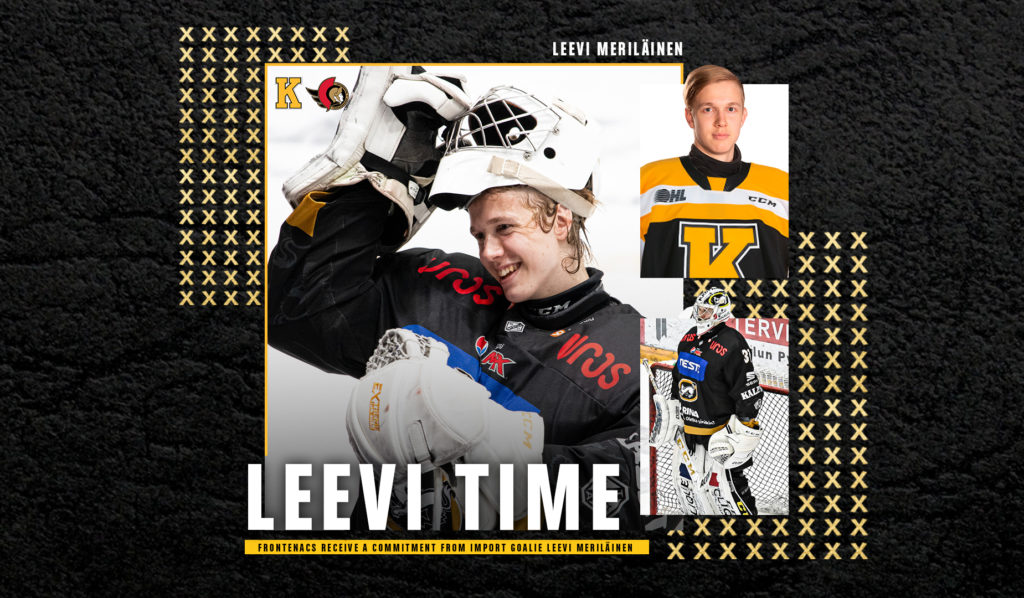 Meriläinen was selected in the opening round of the CHL Import Draft on June 30. The Frontenacs used the 48th overall pick to select the left-handed catching netminder from Oulu, Finland.

Meriläinen was selected in the third round, 71st overall by the Ottawa Senators in the 2020 NHL Draft. He signed his entry level contract with the Senators on June 14, 2021.

“We’re very pleased that Leevi has made the decision to join the Frontenacs next season,” said Ottawa Senators general manager Pierre Dorion. “The Fronts have long maintained a strong program and our proximity to Kingston will allow for our hockey development staff and goaltending coach to closely monitor his progress.”

On June 16th, 2021, Meriläinen was named to Finland’s roster for the 2021 World Junior Summer Showcase that is currently taking place in Plymouth, Michigan. On July 25th, he made 28 saves on 29 shots in a 2-1 victory over Team USA White.

“We are excited about the commitment from Leevi. He’s a goaltender who has been on an upward trend over the last couple of seasons in Finland.” said General Manager Kory Cooper. “As an Ottawa Senators prospect, he is thrilled about the opportunity of playing in Kingston and helping the Frontenacs win games.”

Cooper believes Meriläinen is a goaltender that can provide consistency to the team. “Leevi has shown the ability to provide solid, consistent goaltending in both regular season and playoff games. He is a great addition to our team and a player that fans will really enjoy watching.”

Leevi Meriläinen is expected to join his new teammates at training camp starting in late August. Follow www.kingstonfrontenacs.com for more details as they become available.