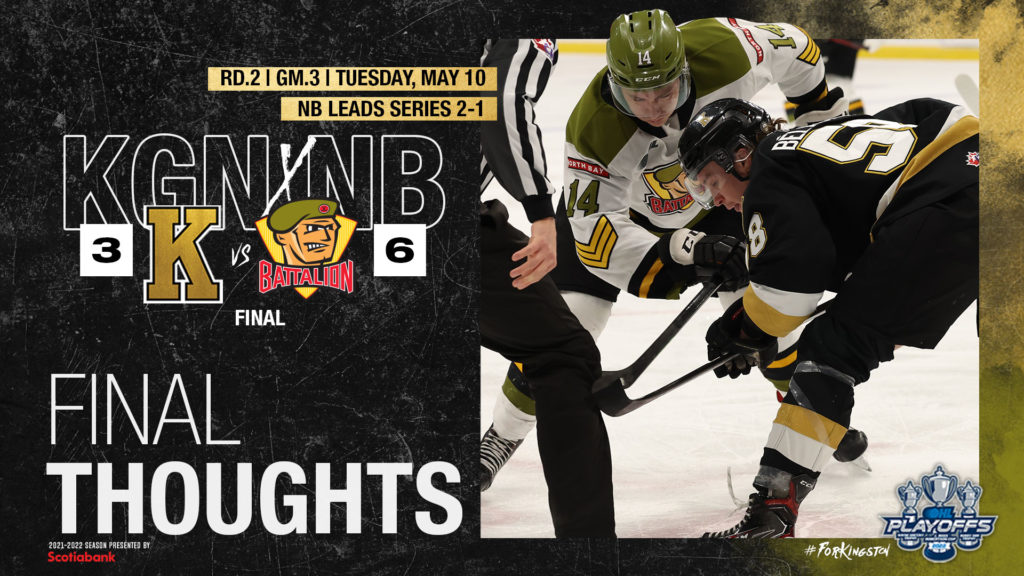 The Kingston Frontenacs and North Bay Battalion continued their seesaw battle of wins on Tuesday night as the Troops took a 6-3 win to take a 2-1 series lead in the 2022 OHL Eastern Conference Semi-final. Kyle Jackson had four goals, joining teammates Brandon Coe and Mitchell Russell with four-point efforts. Martin Chromiak, Paul Ludwinski, and Francesco Arcuri had the Fronts’ tallies.

Head coach Luca Caputi spoke after the tough fought loss. “A lot of our players played really well. Its tough to talk about how we dropped this game, but at the same time we know it’s a long series and this hardworking group absorbs information well; so, we’ll just get back at it tomorrow. That’s all you can control.”

“Tonight just wasn’t our night, continued the former NHL’er and OHL scoring star. “It’s tough to talk about because they played good for long stretches. Like I said, it’s part of the playoffs. We’ll pick ourselves back up here and be ready for Thursday (Game 4). It’s going to be a long series.”

Martin Chromiak had one goal on 17 shots in the Round 1 six-game win versus Oshawa, going goalless in the first five games. The LA Kings prospect has tweaked the radar netting a tally in the first three games against North Bay, running his goal-streak to four after a big Game 6 goal over the Generals. After leading the Kingston offence with 44 goals in the regular season, the Slovakia current has 4 goals in the playoffs.

The Troops and Fronts have seven of the top-13 point scorers in the OHL playoffs with Kingston’s quartet of Wright, Ludwinski, Wisdom, and Arcuri making Kingston the only squad with four players with 12 or more points.

The Battalion duo of Brandon Coe and Mitchell Russell have registered 35 combined points to lead all offensive pairings. The Black and Gold’s Zayde Wisdom and Francesco Arcuri (28) are tied with Hamilton’s Logan Morrison and Mason McTavish for the second most amongst top-scoring pairings.

The Ottawa Senators prospect has been brilliant throughout the post-season playing the second most minutes (556) to Flint’s Luke Cavallin. The Finnish OHL Import Selection in 2021 also has seen the second most shots (298), while registering 267 saves, only behind Cavallin.

Joe Vrbetic had started the first six games for the Troops heading into Game 4. After the Montreal Canadiens prospect had a tough game in the Kingston 5-4 OT win, last Sunday, Battalion coach went with Dom DiVincentiis in the crease for his first career playoff start. Caputi’s offensive attack plan didn’t change with the switch. “No, I mean our game plan didn’t much change just because of the goalie,” he said after he game. “We had a mindset, and you know its never going to perfect, never easy. These are the nights that hurt, and they should. But it drives you to get back to the rink tomorrow and find answers. These kids are a resilient group all year, we fought a lot of adversity, and we continue to fight.”

The rookie has posted a .904 save percentage since coming into Game 3 for Vrbetic after the early 3-0 Fronts lead.

The Fronts and Troops face-off at Leon’s Centre for Game 4 versus North Bay on Thursday, May 12 at 7:00 pm.

Secure your seats to cheer on the Frontenacs run at an OHL Championship today! Tickets are available at ticketmaster.ca or the venue box office.

Round 2 Matchup: Linseman Bracket
20 hours ago