Frontenacs Have Strong Showing in 5-4 Shootout Loss to Generals 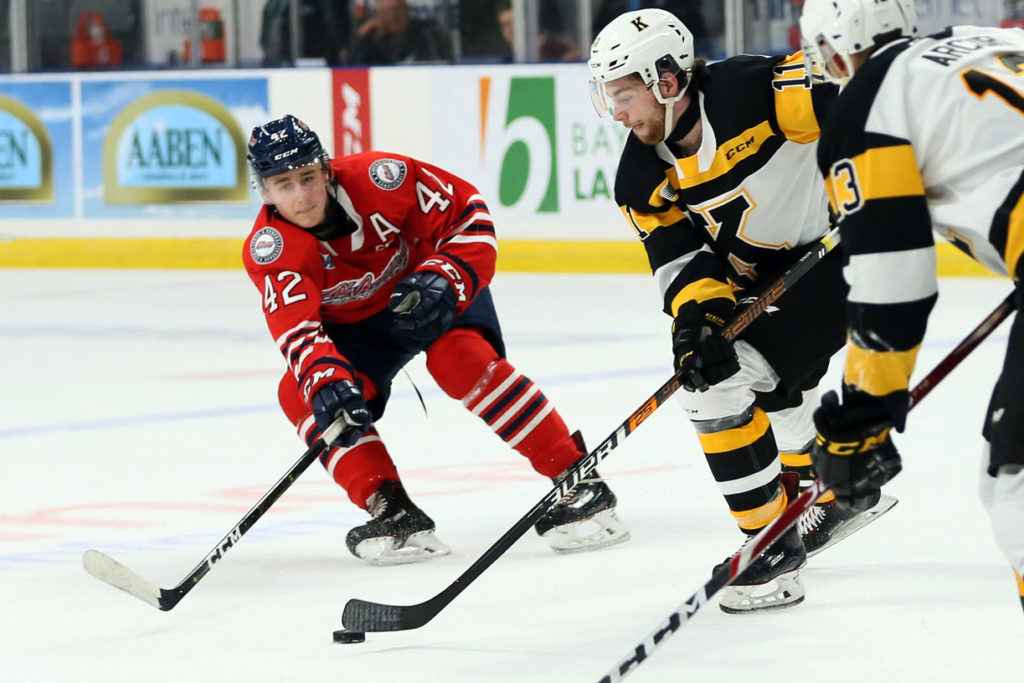 It’s only August, but hockey was back in the Limestone City on Friday night at Leon’s Centre. The Kingston Frontenacs hosted the Oshawa Generals in the first exhibition game of the 2019 preseason. There were a lot of new faces for Fronts fans to see. All four of Kingston’s first four draft picks were in the lineup on Friday night including Shane Wright, Francesco Arcuri, Maddox Callens, and Braden Haché. Also new to the lineup were CHL Import selection Vitali Pinchuk, recently acquired Jordan Frasca and returning from two years ago was Justin Pringle. In total 24 players remained on Kingston’s roster heading into the exhibition game.

The first period was a low scoring affair, which is to be expected when teams are taking to the ice for the first time in five months. The Generals opened the scoring late in the period when Danil Antropov beat Brendan Bonello with a great wrist shot. Kingston outshot the Generals 10-6 but trailed 1-0 after twenty minutes.

Things changed drastically in the middle period. Kingston scored three goals before the 10-minute mark. Jordan Frasca was the first to beat Aidan Hughes and it came just 0:22 into the period. Francesco Arcuri gave the Frontenacs a 2-1 lead with a beautiful tip on an Adrien Beraldo point shot. That lead was quickly extended by Justin Pringle when he squeezed the puck between the pad of Hughes and the post. Jacob Winterton brought Oshawa back within a goal just as a Kingston penalty was about to expire. The three-goal period gave fans a positive look at the new Frontenacs roster and gave the Frontenacs a 3-2 lead heading to the final period.

Kingston extended that lead to 4-2 early when Shane Wright intercepted a pass and slid the puck to Lucas Rowe who beat Hughes with a backhand shot. The Generals were able to get that goal back later in the period. Lleyton Moore kept a point shot low and created a rebound off the pad of Bonello. Tye McSorley jumped on the rebound and banged it in to make the game 4-3. Kingston looked like they were going to hold onto the lead until Oshawa pulled Hughes for the extra attacker. An old friend came back to haunt the Frontenacs when Brett Neumann tied the game with under a minute remaining.

In the preseason, teams don’t play overtime periods, so they went straight to a shootout. Hughes stopped Nick Wong and Shane Wright while Antropov and Tullio scored on their chances to give Oshawa a 5-4 victory.

Kingston’s young players looked strong in their first opportunity at OHL hockey. Braden Haché had strong shifts on the back end while Vitali, Wright, Arcuri, and Callens all had contributing shifts throughout the game. The result may not have gone the way the team hoped but positives far outnumbered the negatives in the preseason game.

The Frontenacs next “home game” will take place at the Strathcona Paper Centre in Napanee on September 13th against the Ottawa 67’s. That will be followed by the Home Opener presented by Scotiabank on September 20th against the Oshawa Generals. Tickets can be purchased at ticketmaster.ca.