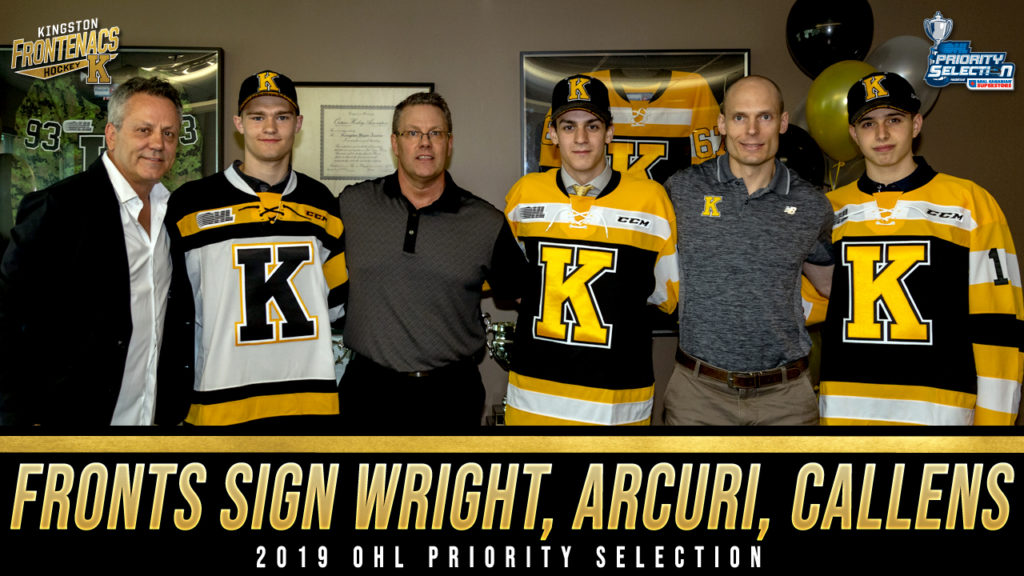 Kingston—The Kingston Frontenacs are pleased to announce the signing of the team’s first three draft picks from the 2019 OHL Priority Selection to Standard Player Agreements.

Shane Wright, a 6’00”, 181 lbs. Burlington, ON native, was the 1st overall pick of the 2019 Priority Selection. In March, he was granted exceptional player status by Hockey Canada making him the fifth player to receive that honour. Shane was a member of the Don Mills Flyers team that won the OHL Cup in March. After an outstanding regular season in which he scored 66 goals and 84 assists, Shane continued his dominance with 8 goals and 10 assists at the OHL Cup. Those numbers earned him the tournament MVP award and his 18 points fell just one shy of the tournament record held by Connor McDavid.

Francesco Arcuri was a teammate of Wright’s with Don Mills. The Woodbridge, ON native stands 6’00” and weighs 187 lbs. He scored 34 goals and 64 assists with Don Mills in the regular season and added 4 goals and 9 assists at the OHL Cup. In early May, Francesco took part in the OHL Gold Cup where he scored 1 goal and 4 assists in 4 games. His GTHL Blue team defeated his fellow teammate and Frontenacs draft pick, Shane Wright, 5-4 in the tournament final. The Frontenacs selected Arcuri in the 2nd round, 27th overall in April’s draft.

Maddox Callens may not have been a member of the Don Mills Flyers, but he put up equally impressive numbers with the Brantford 99ers. He scored 25 goals and 27 assists for a points/game average of 1.57. The 5’11’, 168 lbs. Langton, ON native was the 3rd round selection of the Frontenacs and 43rd overall selection in the draft. Callens also participated in the OHL Gold Cup suiting up for Team Alliance. He scored 3 goals in 4 games at the tournament.

Darren Keily, General Manager of the Kingston Frontenacs, stated “Obviously all three players have a huge upside and we are excited to have them join the team this coming season.” He added “Each one of these guys is talented offensively and brings great character and work ethic to our team.”

All three players joined the “Frontenacs this Week” podcast to talk about their big day and the summer ahead. Click here to listen to the episode.

While GM Keily is excited to get these three players signed, he also said “This is a great start to shaping the 2019-20 roster but there is still work to do. Training camp will provide an opportunity for players to earn a roster spot for the upcoming season.”

The Kingston Frontenacs open 2019-20 Training Camp at the end of August. More information will be released closer to camp.