Fronts Can’t Avoid a Bite from the Bulldogs 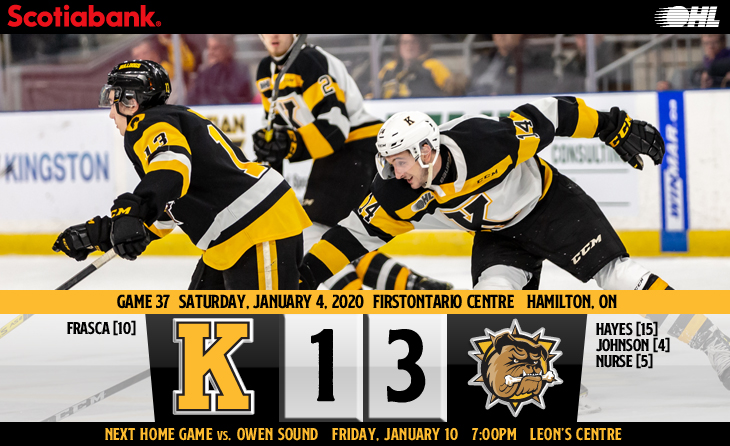 Kingston was back on the road on Saturday afternoon in Hamilton looking to get back on the winning track after two consecutive losses to Ottawa and Erie. It would be the team’s third game in as many days and second one away from home. While the Frontenacs were better in preventing scoring chances with the shots 29-20 Hamilton, it wasn’t enough today in a 3-1 defeat.

After giving up 50 goals in their last nine games, winning only twice, it was important, in coach Fosters view, to get back to playing a sixty-minute game with every one of his players giving their best effort. The coach went with 11 forwards and 7 defencemen as he’s done in the recent past. The game would feature two of the three youngest teams in the league with Kingston being the youngest.

Hamilton was without star forwards Arthur Kaliyev and Jan Jenik who participated in the World Junior Tournament. While Kaliyev’s USA team was eliminated he was not dressed and the news was worse for Jenik as he suffered a season-ending leg injury. Christain Propp was back in the net after Ryan Dugas started last night vs Erie. Nick Wong was also back in the lineup for Coach Foster after being healthy scratched in the last game.

The first period was fairly uneventful in terms of scoring with both teams having times of pressure. Vitali Pinchuk almost got Kingston out to the early lead standing alone in front of Hamilton starter Zachary Roy but lost the handle on the puck as he was trying to put the puck around the goalie. Dawson Baker had another good opportunity on a two-on-one but again couldn’t get one by Roy.

Defenceman Lucas Peric left the game after he collided with Navrin Mutter. While he skated off on his own, it looked like the hit caught his face and head area and he would be taken off for evaluation. Jordan Frasca hit the post shortly after, setting himself up with a nice move to the centre of the slot but couldn’t get the lead for the visitors.

Hamilton’s best opportunity came when Kingston took two late period penalties giving the Bulldogs a 36-second five-on-three with Braden Haché and Dawson Baker in the box. Kingston’s had trouble at times this season while down a man but did a good job limiting shots during the kill with Propp making some good saves and not allowing rebounds. Hamilton would be missing Jenik and Kaliyev here as the players have been dynamite on the man-advantage.

Kingston had some good pressure towards the end of the period. Shots on goal were 11-7 Hamilton in a somewhat sloppy scoreless opening period. The line of Maddox Callens, Justin Pringle, and Baker was strong on the forecheck all game.

The first goal of the game came unassisted at 3:34 of the second when Frasca made a beautiful play for the 1-0 lead. Frasca poked the puck away from a Hamilton defender at his blue line, and then went in alone on Roy and made a nice deke as he went forehand/backhand beating the Bulldogs goalie over the left shoulder for his 10th. It would be the 16th time in 37 games the Frontenacs scored first with a 7-7-0-1 record after doing so.

Just after the four-on-four ended, Hamilton tied the game at 14:49 when Avery Hayes beat a diving Propp for his 15th and the teams headed to second intermission all square 1-1. Hamilton had some good opportunities holding Kingston shotless in the last five minutes of the period.

The third period saw both teams play tentatively with only four shots between the two 12 minutes in with Jakob Brahaney getting Kingston’s first shot at 11:46.

Hamilton was able to get some offensive-zone time late in the period and Bradey Johnson got to a rebound and wrapped the puck around the net stuffing it between an outstretched Propp and the post giving Hamilton the late 2-1 lead at 18:02. The scoring ended at 3-1 after an empty-net goal when Isaac Nurse shot the puck from his end with Propp pulled.

Today marked the last game for Shane Wright as 15-year-old in the OHL, as the rookie skater turns 16 tomorrow.

The Frontenacs next game at home is Friday, Jan 10 at 7 PM when they take on the Owen Sound Attack featuring Team Canada World Junior member Aidan Dudas. Kingston will be right back at it on Saturday at Leon’s Centre at 7 PM taking on the Guelph Storm and another Team Canada member in goaltender Nico Daws.

Tickets are now available at the box office or at Ticketmaster.ca.