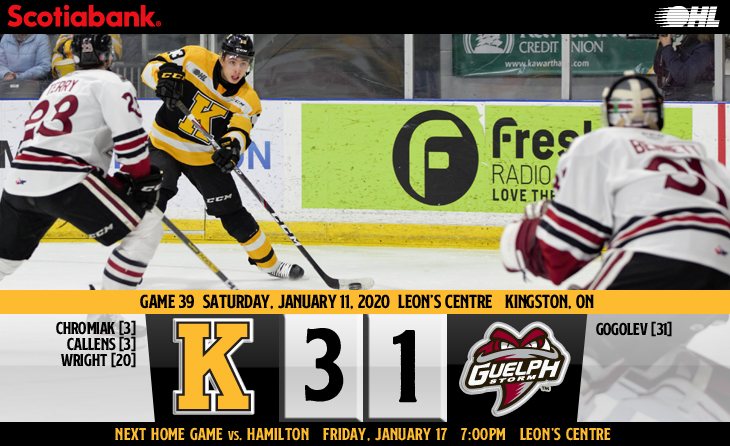 Friday night saw the Kingston Frontenacs earn a much-needed win over the visiting Owen Sound Attack. On Saturday, they took home ice again against a Western Conference opponent. This time it was the Guelph Storm suiting up in the visitor’s locker room. Guelph was involved in a high scoring affair the previous night losing 9-6 to the Ottawa 67’s. The Frontenacs were looking for their second straight win while tying the season series against the Strom at the same time.

Kingston came out firing looking for a hot start. They jumped out to an early 6-0 lead on the shot clock, but rookie goaltender Owen Bennett was equal to the task.

Guelph responded by outshooting Kingston 7-2 for the remainder of the period, but again the goalie stood tall. This time it was Frontenacs goaltender Christian Propp keeping the game scoreless for the opening period.

It was the latest addition to the Frontenacs roster that opened the scoring. Martin Chromiak took a strong wrist shot from the top of the circle midway through the second period while Kingston had a man advantage. It grazed the post and found its way behind Bennett for a 1-0 Kingston lead.

As the game moved along, it started to look like the single goal may hold up. The Storm had other ideas. Their leading goal scorer added to his totals on a Guelph power play. Pavel Gogolev scored his 31st goal of the season, but more importantly, he tied the game for his team.

The young Frontenacs team responded well after giving up a goal for the second night in a row. Six minutes after Guelph tied the game, Kingston reclaimed the lead. Maddox Callens took a simple wrist shot from the slot that Bennett got a piece of, but not enough of. The goal put Kingston ahead 2-1.

From that point on Kingston focused on defence. They held Guelph to low scoring areas and Christian Propp made saves when called upon. Eventually it forced Guelph to pull the goalie for the extra attacker. That gave the Frontenacs the opportunity to seal the game.

Martin Chromiak retrieved a dump in, and a loose puck popped out to Vitali Pinchuk. He found Shane Wright in front of the empty net and Wright scored his 20th goal of the season. It clinched a 3-1 win for the Frontenacs.

Vitali Pinchuk recorded two assists in the game, which was being played on his birthday.

After hovering around the 70% mark while killing penalties for most of the season, the Frontenacs have killed 8 of their last 9 penalties. They only allowed 23 shots on goal throughout the game.

The five game homestand continues next Friday for the Frontenacs when they take on the Hamilton Bulldogs on Bell Let’s Talk night. They then host the Flint Firebirds next Sunday for a 2 PM game. Tickets to both games are available at ticketmaster.ca or at the Leon’s Centre box office.