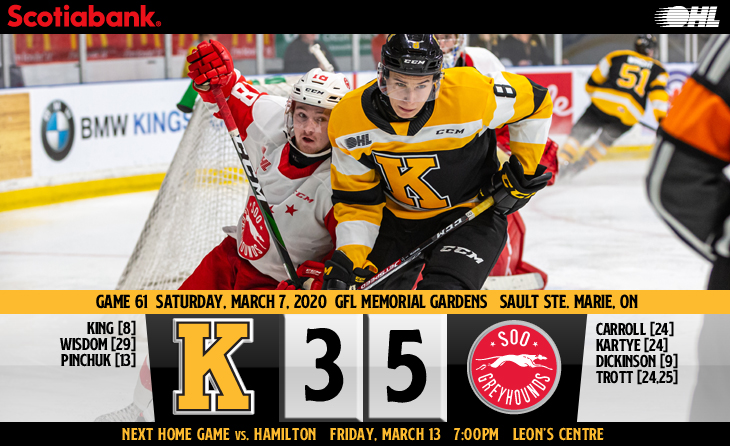 The Kingston Frontenacs stayed in the battle on Saturday night losing to the Soo Greyhounds. After being down 4-1, they battled back to get within a goal at 4-3 before ultimately losing 5-3. The Frontenacs were playing the first of the final two games of a seven-game road stretch tonight before heading back to the friendly confines of Leon’s Centre next weekend. They are coming off the 1-0 loss in North Bay last Thursday night.

Braden Haché and Maddox Callens both returned to the lineup versus North Bay while Lucas Peric would serve the second of a four-game suspension.

After Kingston couldn’t convert on an early power play after Maddox Callens drew a call, the Greyhounds would capitalize on their first opportunity. Joe Carroll made it 1-0 at 9:19 to give Soo the early lead. After a nice three-way passing play started by Rory Kerins, Carroll scored his seventh with Kerins and Jaromir Pytlik drawing helpers.

The Greyhounds were able to hold the majority of possession in the first though the shots were relatively even through the first 15 minutes. Kingston went on its second power play with Jacob Holmes off for hooking Chromiak, and this time they made them pay. Jakob Brahaney would rifle a shot from the point after taking a pass from Chromiak and Nick King was able to get a stick on it for the 1-1 goal at 15:02. It was the veteran defenceman’s eighth goal of the season.

Haché and Evan Brand were making life uncomfortable with some nice body checks trying to keep the Soo forwards on their toes.

Soo would make it 2-1 with just under two minutes to go when Kingston native Tye Kartye was able to beat Propp after being set up on a spin-a-round pass by Zack Trott. He scored his 24th with a nice deke going to his backhand at 18:19 sending the home side to the dressing room with the first intermission lead. Kingston would get called for a late period penalty on Haché at 18:36.

Lucas Rowe had a good shot on Soo starter Bailey Brkin a few minutes into the middle frame, but he was able to glove the dropping rebound before closing Frontenacs forwards could get there. The Greyhounds went up a pair at 6:04 when Tanner Dickinson banged home a cross-ice pass standing off the side of the goal not giving Propp a chance. The 3-1 goal was Dickinson’s ninth of the year from Robert Calisti and Holmes.

After a turnover at the net, Dustin Hutton got a good backhand off on the Soo goalie but he snared the backhand. The Greyhound power play would score on their third man-advantage at 11:45 when Trott scored his 24th from Billy Constantinou and Kartye making it 4-1.

Shortly after Kingston couldn’t connect on a power play chance they began to try and get back in the scoring with a Zayde Wisdom goal at 15:34. Chromiak and Brahaney both earned their second assists of the game on the play, making it 4-2.

The game had a physical edge to it and the teams would get in a scrum in the Frontenacs corner with just under three minutes left in the period. Frasca and Nick Wong were sent off with Greyhound players Ryan O’Rourke and Matthew Halushak joining them. Constantinou and Dawson Baker would get engaged shortly after the play started again seeing both getting two-minute penalties plus 10-minute misconducts.

Kingston got a power play chance with five seconds left and would head to the second intermission down 4-2 and 1:50 of power play time.

The third saw the Frontenacs battle back with a faster-paced period. The teams skated without a face-off for the first 7:15 of the frame during which Wright would have two good chances on Brkin. With Calisti off on a double-minor for high-sticking, Kingston’s power play would take advantage of the 18th-ranked Soo penalty kill with Vitali Pinchuk scoring his 13th at 10:06 drawing the Frontenacs back within two. After passing off to Arcuri, he got an immediate pass back and he one-timed it passed the Soo goaltender high for a 4-3 game. Jake Murray would also be credited with an assist on the power play marker.

After losing on the shot clock up too this point, Kingston had battled back there as well leading 28-27 after the Pinchuk goal. With under four minutes left, Carroll would be called and the Fronts had another chance on the power play. Wright let a low shot go from the slot that both Wisdom and King were able to chip at after the rebound was created, but again Brkin closed the door.

Trott would score into an empty net to round out the scoring 5-3 giving the Greyhounds some much-needed points in their race for the playoffs. Kingston got some help as Niagara also lost to Erie 4-2 and the teams remain tied for the eighth and final spot in the East Conference.

Kingston next plays tomorrow afternoon at 2 p.m. in Sudbury versus the Wolves.

The next home game is Friday, March 13 at 7 p.m. at Leons Centre. Tickets are available at the box office or at Ticketmaster.ca.