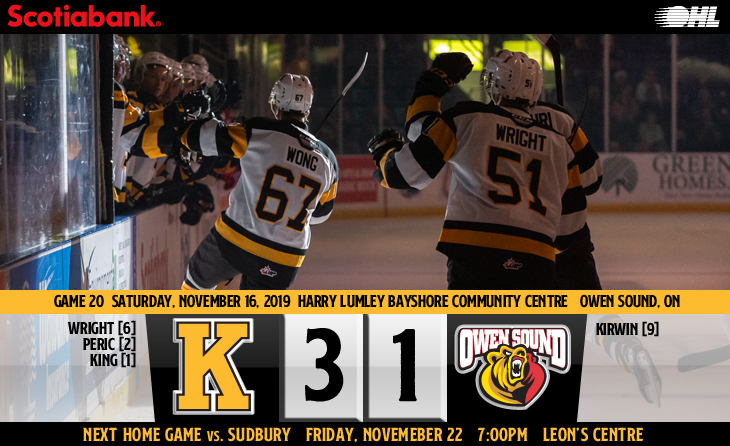 The Kingston Frontenacs made their only visit of the season to the Harry Lumley Bayshore Community Centre in Owen Sound tonight. It would be a great night for the Frontenacs as they would win their first road game 3-1 and get their first regulation win on the year. They faced an Attack team that had already played on two consecutive nights going back to Thursday. Kingston came in off a tough overtime loss in Kitchener last night seeing the Rangers tie it up with 15 seconds left and win it in the shootout 4-3. However, overall it was part of a successful three-point, back-to-back game road trip for Kingston.

Both teams were struggling coming in for victories with the Attack winning once in their last five games and Kingston not having won in 12 games. Ryan Dugas would get back into the Kingston pipes in tonight’s game, though hardly a surprise with the team playing last night. Dugas had played well in both games last weekend vs Peterborough and Guelph. The Frontenacs would face rookie Nick Chenard in the Attack net playing in only his 6th career game, though with a respectable .901 save percentage.

Vitali Pinchuk was not in the Kingston lineup after taking a fall when being tripped up in Friday’s game in Kitchener. The forward will be re-evaluated when the team returns to Kingston.

Kingston got out to the 1-0 lead early in the game when Shane Wright tipped a Jakob Brahaney shot from the point. Brahaney, who leads the team in shots, made a nice play to quickly get the shot on net. Wright’s sixth goal gave Kingston the first goal of the game in what has been a difficult task so far in doing that for the team. Zayde Wisdom’s effort to get the puck was also credited on the play to tie him with Frasca for the team lead in points (15).

The Attack would tie the game 1-1 at the 7:37 mark while on the power-play with Lucas Peric in the box. While Kingston’s penalty killing units need to improve, this was an unfortunate goal as Owen Sound forward Barret Kirwin tried to make a backhand pass across the crease but it was deflected by a skate and bounced up and over Dugas who had been moving across to stop the one-timer.

Kingston would not score on their only power play of the period and Dugas was forced to make many good saves facing 18 shots including a great one while on the power play. The 18 shots were the second most a Kingston goalie had faced so far this season. Dugas held the team close, particularly in the last few minutes of the period while Kingston was killing a penalty to  Dennis Golovatchev.

Owen Sound held the play for most of the second period and Kingston had to kill off a penalty to Evan Brand at the midway point of the frame. Kingston’s second opportunity with the extra-man at 15:57 was short lived as Frasca was called for interference just 19 seconds into the power play sending it to four-on-four. Owen Sound would take another penalty while Frasca was serving his penalty and when Kingston went back to the man-advantage they would get the lead for the second time in the game.

At the 19:00 minute mark, after winning the draw, Kingston had excellent puck movement on the power play with Jake Murray stretching a nice cross-ice pass to Dustin Hutton who set-up Lucas Peric for a one-timer. It found its way past Chenard giving Kingston the 2-1 lead heading to the second intermission. It was a nice change for the Frontenacs to get a late period goal.

The teams would exchange 3 penalties in just 1:03 early in the third but no goals were scored. Anytime you are on the road an insurance goal is huge and Nick King would give Kingston the two-goal lead at 7:23 on the power play. The former member of the Attack would give Kingston some breathing space at 3-1 with his first as a Frontenac. Jakob Brahaney set up King who would fire a wrist shot past Chenard with Shane Wright adding an assist as both players got their second points of the night.

Kingston played well defensively throughout the remainder of the game in an effort that repaid goalie Ryan Dugas for keeping them in the game during the first period stifling Owen Sound and preventing high-quality chances. Jordan Frasca had appeared to put the Frontenacs ahead 4-1 after redirecting a puck but was waived off and reviewed by the officials for no goal.

Jakob Brahaney with two assists had a steady game on the blueline and at +2 was named the third star and Ryan Dugas got the first star making 41 saves on 42 shots. The top line of Wright, Wisdom, and Hutton finished with one goal, three assists and 10 shots and +3 as they seem to have developed some chemistry over the last two games.

Kingston plays next in Peterborough on Thursday, November 21 before their next home game.

The Frontenacs next home game is at 7 PM on Friday, November 22 vs the Sudbury Wolves and 2019 NHL top-ranked prospect Quinton Byfield. It’s Mini-Stick Night at the Leon’s Centre presented by The Home Depot.

Get your tickets at Leon’s Centre box office or at ticketmaster.ca.