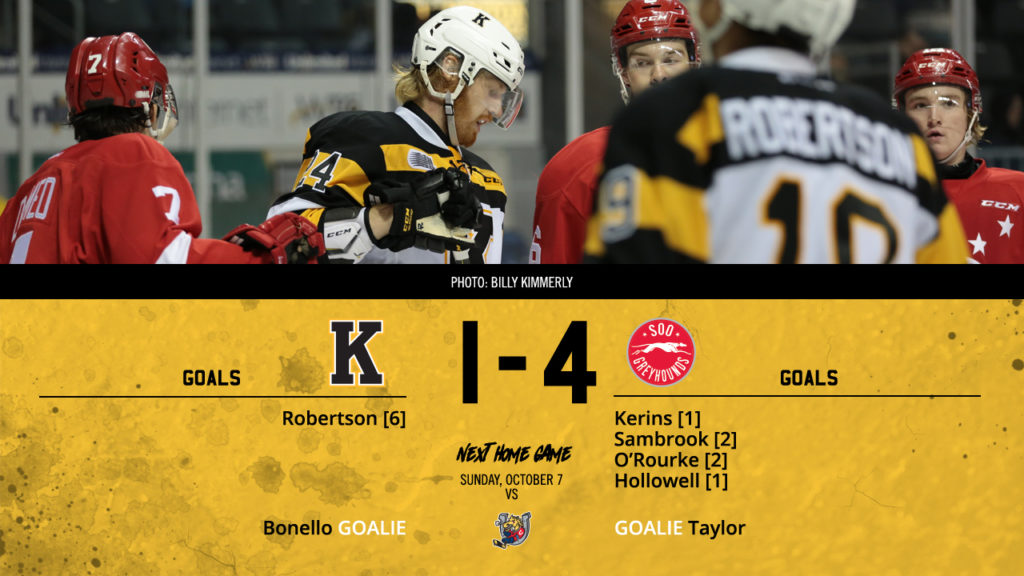 Fronts fans were teased with a home opener on September 21, followed by two full weeks before another home game. Friday night finally provided another chance to see the Frontenacs in action at Leon’s Centre. They were hosting the Soo Greyhounds. Both teams had extended playoff runs during the 2017-18 season, and both teams had very different looking rosters than they did during those playoff runs on Friday night. Kingston carries 6 rookies on their roster while the Greyhounds have 8. One of those rookies for the Soo was rookie goaltender Ethan Taylor who was making his first career start.

Taylor looked good for the Soo early on as Kingston jumped out to an 8-3 lead on the shot clock but weren’t able to beat the rookie netminder. The Greyhounds responded by putting 7 of the next 9 shots on Brendan Bonello and the seventh shot was the one that broke the ice. Rory Kerins scored his first career goal on the power play to put the Greyhounds up 1-0. The Frontenacs would have to kill off one more penalty to end the period, which they did, sending the team to the dressing room trailing 1-0.

Kingston took two straight penalties to start the second period but were able to kill both of them off. The Greyhounds took the next two penalties, but the were also able to kill them off. That allowed them the opportunity to add to their lead. Jordan Sambrook beat Brendan Bonello from the point to put the Soo up 2-0. Ethan Taylor made 11 more saves in the period and the Greyhounds led 2-0 heading into the final frame.

Kingston had an early opportunity to get back in the game with a short 5 on 3 power play and they cashed in. Jason Robertson scored his 6th of the season to cut the lead in half. It was his 107th goal for Kingston making him the 7th highest scoring player in Frontenacs history. Kingston applied some pressure in attempt to tie the game, but the back breaker came just under 8 minutes left. Ryan O’Rourke shot a puck off the post and in to restore a two-goal lead for the Greyhounds. They added an empty net goal to make it 4-1, which would be the final score.

The Frontenacs get a chance to get back in the win column on Sunday afternoon when they host the Barrie Colts at 2 p.m. at Leon’s Centre. Tickets are available at ticketmaster.ca.