Fronts Fall in Front End of Home and Home with Petes 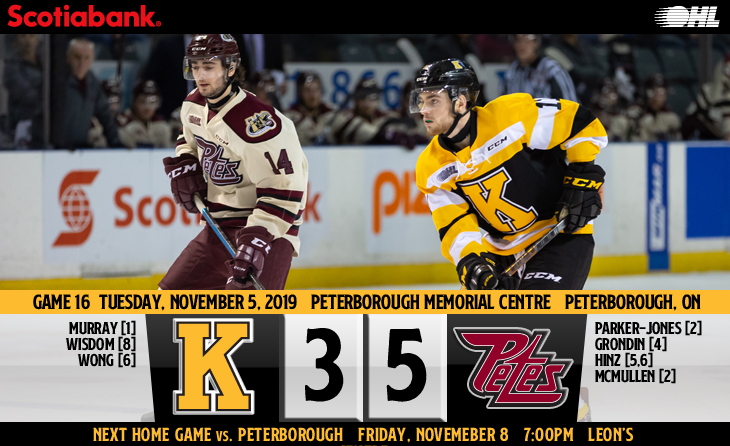 It was the first meeting of the season between the Peterborough Petes and Kingston Frontenacs on Tuesday night at the Peterborough Memorial Centre. It was the first of a home-and-home between the Eastern Division rivals with a rematch set for Friday.  Key for the Frontenacs coming in was to limit scoring chances in an effort to mitigate the high-scoring Petes who have totaled 73 team goals (3rd in OHL).

The Frontenacs have faced some strong goaltending so far and tonight wouldn’t get any easier as OHL win leader Hunter Jones brought his third-best GAA and second-best save percentage to the game. As well, they have dealt with some prolific scorers and former Frontenac Jason Robertson’s brother Nick entered the game tied for the league lead in goals with 19 for the Petes.

Frontenacs Dustin Hutton returned to his original team after being claimed off waivers last Friday. Said the former Pete last week: “I’m really looking forward to it, I can’t wait to to see all the guys and hopefully win in their barn.” Brendan Bonello got the start in the Kingston net. Former Frontenac defencemen Jacob Paquette is now with the Petes.

The teams would play a fairly even first period with both goalies making good saves keeping the game scoreless through the midway point of the period in a fast-paced game, including an almost four-minute stretch of hockey with no whistles. Both teams would get a power-play but neither could connect.

The Petes would get the 1-0 lead at 14:04 of the period as John Parker-Jones fired a wrister that just made its way through Kingston starter Brendan Bonello. His second of the year was assisted by Liam Kirk and Max Grondin.  It marks the 12th time now in 16 games the Frontenacs have been scored on first. The team didn’t take long to reply just over two minutes later when defenceman Jake Murray joined the rush and took a nice feed from a patient Dustin Hutton and buried his first of the season past Jones tying the game 1-1 at 16:25. Peterborough’s Grondin would score a late goal at 18:50 firing a wrist shot from a high-quality scoring position in the slot to send the teams into intermission with the hometown team up 2-1 on Kingston.

The second period would have the teams taking turns at either end of the frame with some solid play. It was the Frontenacs who came out strong and quickly when Zayde Wisdom scored his team-leading eighth goal and 12th point from Justin Pringle just 58 seconds in. Wisdom used his strong wrist shot to beat Jones cleanly over the shoulder and the game was tied 2-2. The Frontenacs struck again on the power-play while on a two-man advantage as Nick Wong’s sixth goal gave Kingston the 3-2 lead. He collected a loose puck off the side of the net and buried it past Jones. Vitali Pinchuk and Jakob Brahaney drew assists on the 14th power-play goal of the year for Kingston.

The second half of the period saw the Frontenacs take three consecutive penalties and with the Petes holding the fifth-ranked power-play in the league it may have been a matter of time before they broke through with their first power-play goal of the game. While it was a valiant effort on the part of the Kingston penalty killers, Brady Hinz scored making it 3-3 at the 16:57 mark setting up a twenty minute battle for the win in the third. Grondin had an assist for his 3rd point of the game.

The Petes scored on their 35th shot as Brady Hinz potted his second of the night just 1:35 into the final frame to make it 4-3. He fired the puck past Bonello when it came straight to him after a shot off the post. Peterborough continued to pressure and on their seventh shot of the period, it was 5-3 when Keegan McMullen and David Maier teamed up at 3:45. Maier sent a stretch pass to McMullen who went in one-on-one on Nick King but was able to beat Bonello with a backhand.

Kingston had one more power-play but could not score and the game ended 5-3. Bonello was solid stopping 41 of 46 shots and Kingston’s penalty kill units were solid holding the Petes to only one goal in five opportunities.

The teams will square off again at the Leon’s Centre this Friday night at 7 PM in the annual Remembrance Day Game. Come join the Frontenacs for a Night in Honour. Tickets are available at the box office or at ticketmaster.ca.