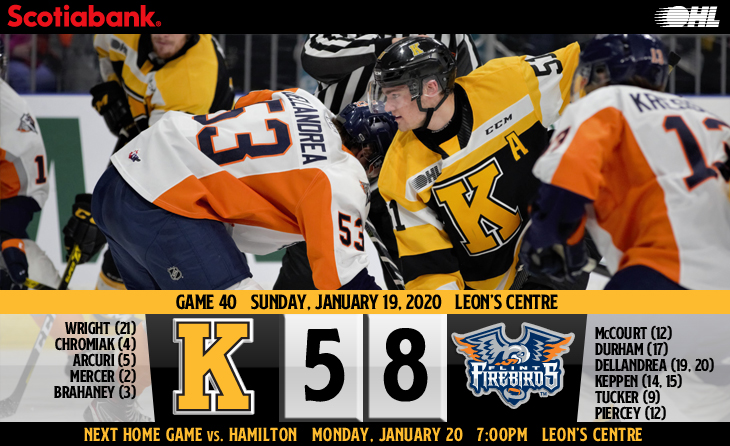 With Friday night’s game being postponed, it had been 8 days since the Kingston Frontenacs took the ice for an OHL game. They were welcomed back to game action on Sunday by a tough team in the Flint Firebirds who were looking for their first win on a three game Eastern road trip.

Penalty trouble would be the early story of the game for the Frontenacs. Kingston took five straight penalties to open the game. They were able to avoid disaster by killing the first three penalties, but the Firebirds cashed in on the fourth chance.

Riley McCourt found himself alone in the slot area during a Flint odd man rush. He beat Kingston starter Christian Propp with a strong snapshot to the glove side to put Flint ahead 1-0.

Kingston killed off their next penalty making them 4 for 5 on the PK early in the game. A strong performance considering how much time was spent down a man.

Unfortunately, the Firebirds scored next, this time during 5 on 5 play. Jake Durham got a stick on the puck to tip it by Propp for an opening period 2-0 lead for the Firebirds.

Kingston went to the locker room looking for answers, which they appeared to find, at least for a short period.

The Frontenacs opened the middle period with four straight goals. Shane Wright opened the scoring from his new line mate Martin Chromiak. It cut the Flint lead in half and got the ball rolling for Kingston.

Wright quickly returned the favour to Chromiak. Chromiak chipped the puck over Luke Cavallin to tie the game with Wright drawing the assist. Kingston continued to gather confidence after tying the game.

Just after the midway point of the period, Francesco Arcuri pulled a loose puck out of the defenders feet and fired a shot by Cavallin to give Kingston the lead.

They would double their lead when Kallaway Mercer scored from an incredible angle over the shoulder of Cavallin. The goal gave Kingston a 4-2 lead and ended Luke Cavallin’s night when the Firebirds decided to bring in Anthony Popovich.

The goalie change seemed to wake up the Firebirds, specifically Ty Dellandrea. He would score back to back goals in the final five minutes of the second period to make the game all square heading to intermission.

Ethan Keppen was the next player to step up for the Firebirds. He gave the visiting team the lead back early in the third period. After a Tyler Tucker goal, Keppen scored again to make it a three-goal lead for Flint.

Jakob Brahaney would bring Kingston back within two goals, but a late goal by Riley Piercey would end the game with a goal giving Flint an 8-5 win.

The Frontenacs will now play their make-up game from Friday night when the Hamilton Bulldogs visit Leon’s Centre tomorrow night at 7 PM. Tickets are available at the box office or at ticketmaster.ca. Tickets purchased for Friday’s game will be honoured on Monday night.