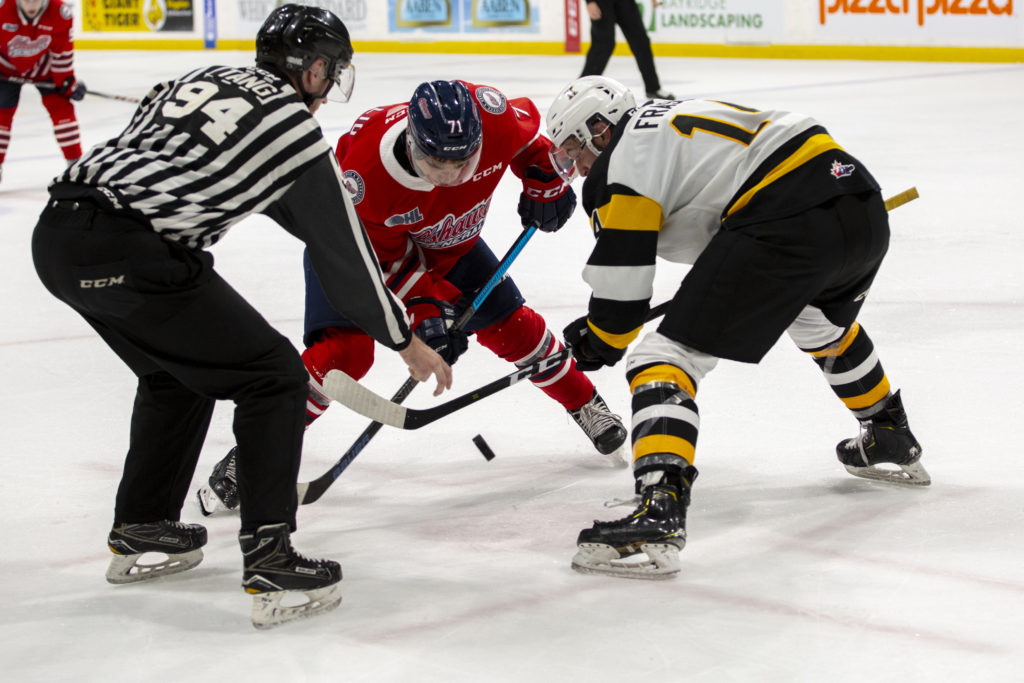 The Kingston Frontenacs opened the 2019-20 season on Friday night against a familiar opponent, the Oshawa Generals. Kingston had a new look roster that included 8 players that weren’t on the roster to end the 2018-19 season. 3 of the 4 draft picks the Frontenacs signed following the 2019 Priority Selection including Shane Wright, Maddox Callens, and Francesco Arcuri, all made their OHL debut along with Vitali Pinchuk who was the 62nd pick in the CHL Import Draft. Braden Haché was not dressed for the Opener.

Emotions escalated quickly when Emmett Gordon came to the aid of teammate Nick Wong after a big hit by William Ennis earning Gordon an instigator penalty. The Generals took advantage when Danil Antropov shoveled a rebound by Brendan Bonello for the first goal of the new season. Kingston tied the game later in the period when Dawson Baker beautifully tipped in a Jakob Brahaney point shot to make it 1-1. Daniel Walker gave the Generals the lead back before the period ended beating Bonello to the glove side giving the Gens a 2-1 lead after one period.

The Generals extended the lead in the second period on Brett Harrison’s first career OHL goal. He took a pass from behind the net and beat Bonello. It was his second point of the game after recording an assist on the Walker goal at the end the first period. Kingston struggled to create offence in the period getting outshot 15-7. The Generals took the two-goal lead into the final frame.

The Frontenacs had a better period in the third putting 11 shots on net, some of which were quality scoring chances. Shane Wright had a great scoring chance early in the period, but Generals goalie Andrew MacLean made that, and 10 more saves to hold Kingston of the scoresheet. Ty Tullio added a fourth Oshawa marker that gave them command of the game and a 4-1 road win to open the season.

The Frontenacs certainly had peaks and valleys on opening night, which can be expected from a team as young as they are. Brendan Bonello made 36 saves on 40 shots to record a solid performance. Coach Foster had the young guys playing important minutes in their debut. Wright and Arcuri both saw power play minutes in the third period while the game was still within reach.

Kingston will have to wait a full week before getting another shot at their first win of the season. They host the Ottawa 67’s next Friday night at Leon’s Centre. Game time is 7 pm. Tickets can be purchased through ticketmaster.ca or at the Leon’s Centre box office.