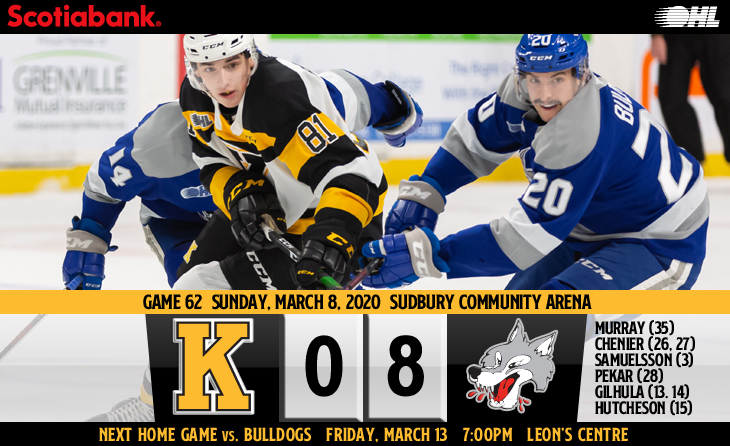 It was the Sudbury Wolves taking an early three-goal lead riding out an 8-0 victory over Kingston Frontenacs on Sunday afternoon with Matej Pekar having a good day on the scoresheet.

Kingston came in on the back end of a back-to-back, playing in a 5-3 loss on Saturday night in the Soo. With Niagara’s loss as well on Saturday, the Frontenacs remained tied with the IceDogs for the eighth-spot in the East Conference heading into this afternoons game. Niagara would play in Peterborough while the Fronts tackled the Wolves on Sunday.

Frontenacs second-year forward Zayde Wisdom continued to add to his career year point totals with his 29th goal in Saturday’s game in the Soo and came into the game with two goals and four points in his last four games. Rookie Vitali Pinchuk has moved into eighth place on OHL rookie scoring in both goals (13) and points (34). In fact, along with Shane Wright (66), Martin Chromiak (33), and Francesco Arcuri (20), the Frontenacs have four first-year players in the top-23 in league rookie-point scoring after Saturday nights games.

Sudbury came into the match-up with a six-point lead on the Barrie Colts in the Central Division but, like Kingston, lost their last game 7-3 on Friday to the Soo Greyhounds. They are slotted in the number-two spot in the Eastern Conference playoff seedings. Ranked in the 2020 NHL first-round, prospect Quinton Byfield entered the afternoon on a two-game point streak collecting five assists.

The line of Nick Wong, Maddox Callens, and Jordan Frasca came out with a great fore-checking shift to try and set the tone and did a good job maintaining some offensive zone time early. However, Sudbury’s powerplay would get on the board at 4:27 on Blake Murray’s team-leading 35TH  strike of the season. Sitting off the side off the left-side of the Frontenacs goal, he was able to finish off a nice three-way passing play banging home the opening score. The 1-0 goal was assisted by Brad Chenier and Pekar with just 43 seconds left in the man-advantage.

After a short five-minute delay for some glass repair, the Wolves powerplay went on a five-on-three and took advantage of it going up 2-0 at 9:29. After killing off the five-on-three, the Frontenacs couldn’t get out of the penalty trouble entirely. When David Levin’s shot banked back out in front of the goal, Brad Chenier banged home his 26th  past an outstretched Dugas. Quinton Byfield collected an assist as well.

Adam Samuelsson made it 3-0 for the home side at 13:02 beating Dugas with a wrist shot from the top of the circle that slightly deflected off Kingston’s Dawson Baker trying to block the shot.

The teams would be getting physical throughout as the games start to get intense with the playoff races alive and well. After Byfield was engaged with Evan Brand and Zayde Wisdom, the Wolves took exception and the teams had a scrum in the corner. Kingston ended up with another powerplay as Francesco Arcuri was sent off for roughing with Sudbury’s Murray called on a double-minor.

Kingston got their chance for a two-man-advantage when Samuelsson was called while killing the Murray second-penalty. Sudbury’s penalty-killing units again did a good job limiting high-quality chances killing off the penalties going to the second intermission up 3-0. Kingston would get called on a late high-sticking penalty to Chromiak  with just under a minute left.

The start of the second saw Kingston get three straight shots on Purboo but it would be the Wolves lengthening their lead scoring a pair of goals in the middle frame. Pekar scored his 28th from a wide-angle after getting a nice pass to make it 4-0 just under four minutes into the period. It was 5-0 at 7:37 when Owen Gilhula scored his 13th after being sprung on breakaway on a nice feed by Robinson beating Dugas with a swift backhand shelf goal.

Sudbury controlled play most of the period, and even though the shot clock was close at 25-22 for the Wolves, it was the home team with the more dangerous chances throughout. Wright would have Kingston’s best chance snapping a good shot off from the slot but Purboo snared it with a nice glove save keeping his shutout alive.  Arcuri would also have a chance on a late breakaway to get the visitors on the board but he was also turned away by the solid goaltending of the Wolves starter as the teams went to the second intermission.

The final frame saw the Wolves add three goals in a fast-moving final frame. After a shot by Jack Thompson was sent towards the net, it deflected off the charging Nolan Hutchison’s skate and dribbled over the line at 12:09 for his 15th goal. It was then 7-0 at 15:00 when Chenier finished a breakaway  chance on the Kingston goal for his 27th goal.

Gilhula added his second of the game (14th) late to end the scoring at 8-0 and help the Wolves chances at a divisional title. Pekar added an assist to finish with five points in the game.

Kingston’s offence has had a tough time going scoreless in two of the last three games and will look to regroup for some important games next week.

However, the Frontenacs again got help on the out-of-town scoreboard as both Niagara (11-1 to Peterborough) and North Bay (7-1 to Ottawa)lost as well, keeping them tied with the IceDogs and staying four points up on the Battalion for the final spot in OHL playoffs in the East.

Home-Cooking! After a seven-game road stretch the next game is Friday, March 13 at Leons Centre vs OHL’s fourth-leading goal-scorer and Eastern Conference foe Hamilton Bulldogs at 7 p.m.

Tickets are available at the Leons Centre box office or at Ticketmaster.ca. Come cheer on the local club to a playoff run!