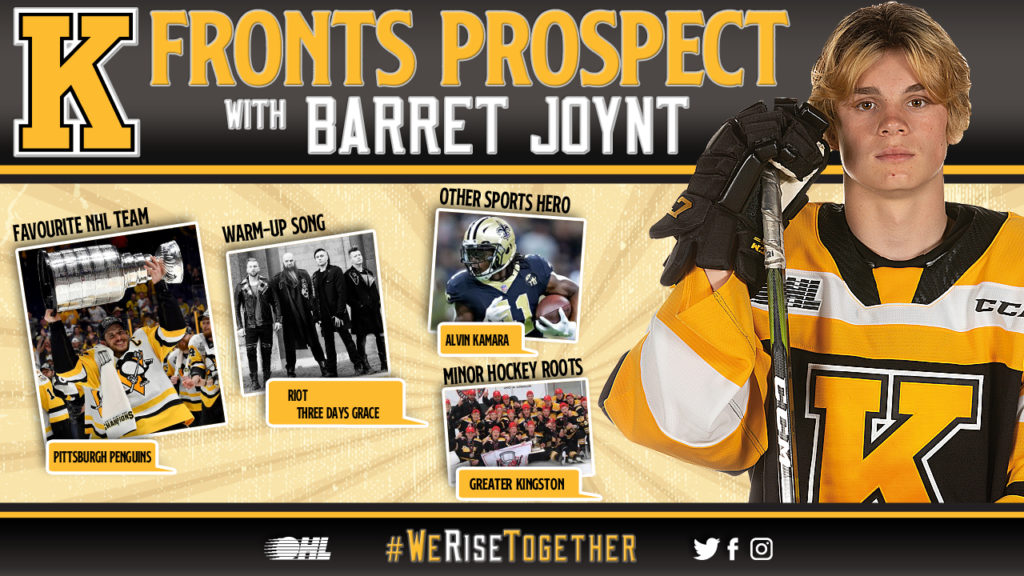 Hockey scouts spend a lot of time on the road. They are in countless cities and rinks searching for players that will make a difference for their hockey club. Despite all those miles, sometimes the best option for the team is in their own backyard. That was the case with Kingston’s 15th round pick, Barret Joynt.

The Frontenacs used the 284th selection of the 2019 OHL Priority Selection to pick Kingston, ON native Barret Joynt. Barret spent the 2018-19 season playing for the GK Frontenacs Minor Midget AAA team. Standing just 5.09, some might say he is too small to be effective, but Barret can score. He finished third on the team with 35 points in 36 games while leading his team in goals with 20.

We asked Frontenacs Head Scout, Aaron Van Leusen, about Barret and he had many positives to share:

“Barret played for the minor midget AAA Kingston Jr. Frontenacs last year and was a leader both offensively and with his strong work ethic.  Barret plays hard in all three zones.  Without the puck, his feet don’t stop moving, which allows him to create turnovers and force other players into bad decisions. He back checks well and can transition into offense nicely.  Barret is a smooth skater and has a stride that is both quick and agile.  He can exploit defenders when he gets a step and has great awareness of where to find loose pucks and scoring opportunities.”

Aaron added that Barret can score in more ways than one:

“Barret showed he can score by being a net front presence and using screens, tips, or by winning fights for rebounds.  He also shows that he is able to use a quick shot to catch goalies off guard or use his play-making skills to find an open teammate.”

Barret told us that his favorite sports other than hockey were “Baseball or Track.” During orientation camp he showed everyone that he wasn’t kidding. While completing wind sprint drills, Barret looked like he could have run for days, hardly breaking a sweat after multiple reps.

Even when he is off the ice, Barret always loves playing hockey. When asked about his favorite minor hockey moment Barret said, “I loved playing mini sticks in the hotel hallway.”

Barret will join the rest of the Frontenacs veterans and prospects in late August at training camp in his bid to make the squad for the 2019-20 season.