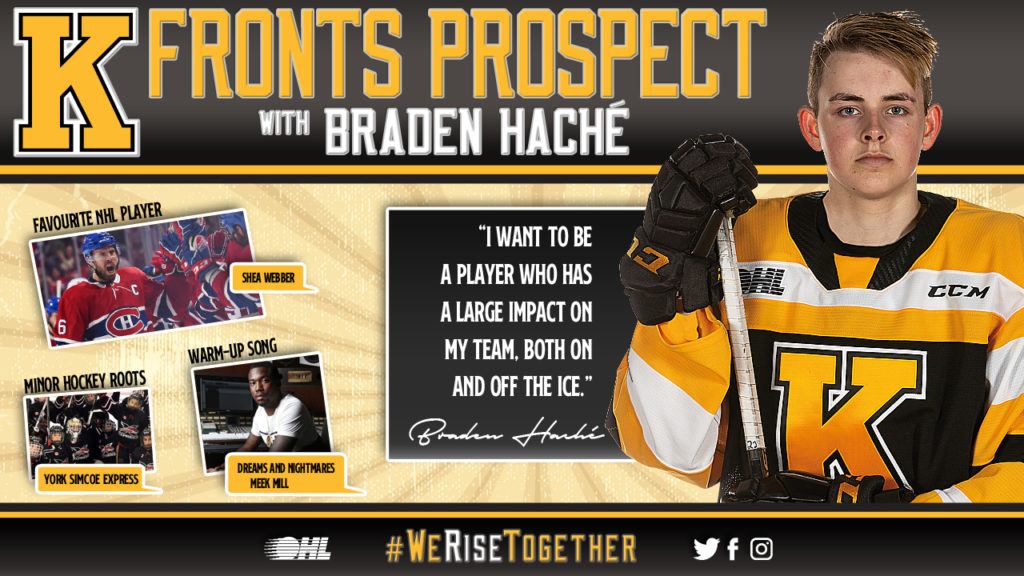 After taking three forwards in the first three rounds of the 2019 OHL Priority Selection, the Kingston Frontenacs took the opportunity to draft a lefthanded defenceman with their 4th round selection.

Braden Haché is a 6’ 2”, 185 lbs, Newmarket, ON native who played for the York Simcoe Express. He isn’t the type of defenceman that will average a point/game but what he does in the defensive zone makes him stand out. When asked about Braden, Frontenacs Head Scout Aaron Van Leusen had this to say:

“Braden is a poised defenceman, who played for the York Simcoe Express minor midget AAA team last year.  He showed that he thrives defensively but is also capable of playing in a variety of situations and in big minutes.  In the defensive zone, he is very tough to play against.  He is blessed with size but uses physicality and smart positional play to consistently separate pucks from forwards.  With an active stick and steady gaps, he makes it tough to beat him off the rush.”

Although he may not focus on scoring, Braden’s abilities with the puck were not lost on the Frontenacs staff. Van Leusen added:

“When Braden gets possession of the puck, his head is constantly up, reading his options and understanding his pressure.  Braden can then make a consistent first pass or use his feet to gain some time and space. In the offensive zone, Braden doesn’t rush pucks off his stick, instead, he uses his mobility to open up passing and shooting lanes and becomes a constant option for his forwards.”

When asked what his OHL goals were, Braden said:

“I want to be a player that has a large impact on my team, both on and off the ice. I want to win an OHL championship and a Memorial Cup”