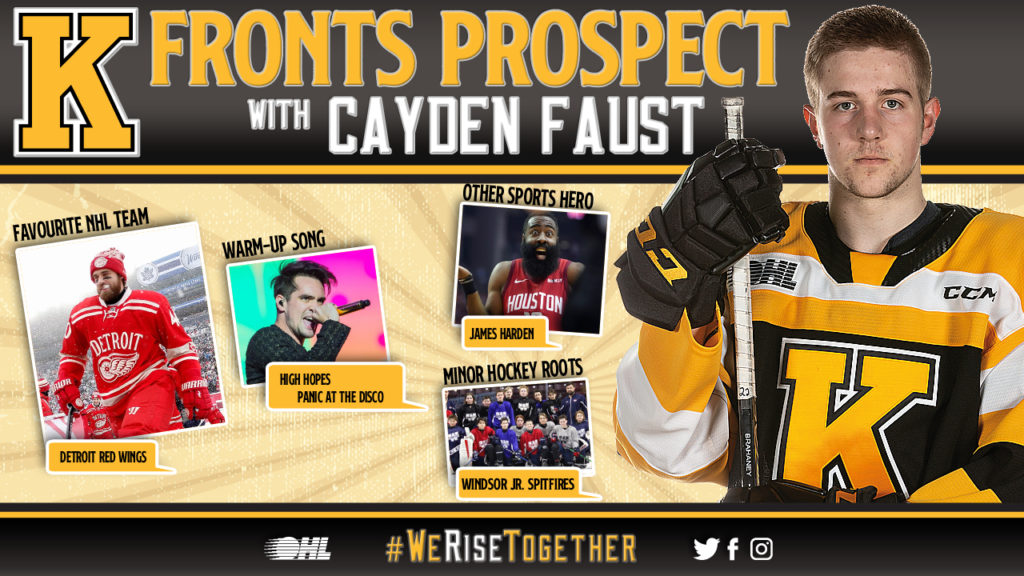 Windsor, Ontario isn’t the closest place for the Kingston Frontenacs scouting staff to visit but when there is a player worth looking at, you can bet they are going to make the trip. The Frontenacs decided that Cayden Faust was worth that trip.

The Frontenacs drafted Cayden in the 11th round of the 2019 OHL Priority Selection in April. The 204th pick spent the 2018-19 season playing for the Windsor Jr. Spitfires AAA team of the AHMMPL. With Windsor, Cayden scored 17 goals and 18 assists in 32 games. He also performed well in the playoffs when he scored 4 goals and 6 assists in 12 games.

“Cayden brings a high level of intensity to his game and understands how to get the puck in dangerous positions.  He knows how to time his skating so that he gets pucks when in full stride.  With the puck, he likes to attack defenceman and get a step around them.  If no lane exists, Cayden won’t force plays but can dump the puck in and attack, using smart forechecking skills and a determination to win battles.”

That report suggests that Cayden has a great feel for the game but there is more to his game than that. Van Leusen added:

“Being opportunistic, Cayden shows he can score when skating in stride or by finding soft areas in the offensive zone which he can exploit with his quick release.”

Cayden didn’t hesitate when asked what his favorite minor hockey memory was. He responded with:

“Getting Bronze in the OHL Gold Cup with Team Alliance”

Based on that answer, it is safe to assume that Cayden wants to win, but he also wants to continue his development. When asked about his OHL goals, Cayden said:

“I want to continue to improve my hockey skills”

Aaron Van Leusen and the Frontenacs staff are confident he can do that. Aaron stated:

“As Cayden adjusts to the speed and strength at the next level, we believe he can continue to showcase his strengths and be an effective player.”

Cayden recently signed with the LaSalle Vipers of the GOJHL. He will attend Frontenacs training camp in August before joining LaSalle for the 2019-20 season.