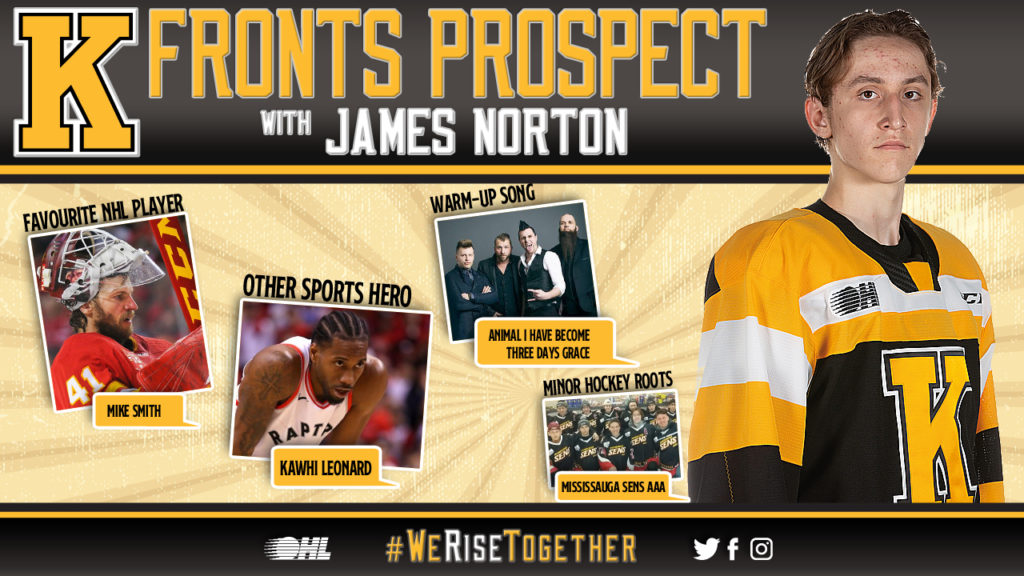 Every hockey team strives to have great depth in goal. The importance of the position requires a team to have options as they move forward. When there is an opening, whether it be from injury, trade, or graduation, it is essential for an OHL team to have someone ready to step in and play. The Kingston Frontenacs added to that depth pool in the 2019 OHL Priority selection when they selected James Norton.

Norton already possesses great size for a young goaltender. He stands 6’04” and weighs 183 lbs. The lefthanded catching goaltender played for the Mississauga Sens last season. He was selected in the 7th round, 124th overall in the 2019 OHL Priority Selection.

“James is a big-bodied goaltender that uses his long lean frame effectively.  His net coverage immediately poses a challenge for shooters looking for any space to shoot.  He shows good athleticism when he goes post to post, covering off the bottom of the net effectively.  James has a calm demeanor which keeps him focused on tracking the puck and allows him to regroup quickly when facing a lot of pressure.  This focus allows him to make 2nd and 3rd chance saves as he can get back into position.”

Like any young hockey player, there is room for Norton to improve. Van Leusen added:

“As James continues to grow and work on his core strength, he will be able to sharpen up his quickness and consistency.  He will be able to build on his solid foundation to be a key goaltender in the future.”

James is already winning over Frontenacs fans. When asked about his favorite NHL player he chose Verona, ON native, and former Kingston Frontenacs goaltender, Mike Smith.

With that in mind, it should be no surprise that when he was asked about his OHL goals James responded with:

James Norton has worked with Dave and Marco Franco, the current Kingston Frontenacs goaltending coaches, and will continue to do so leading into training camp this coming August.