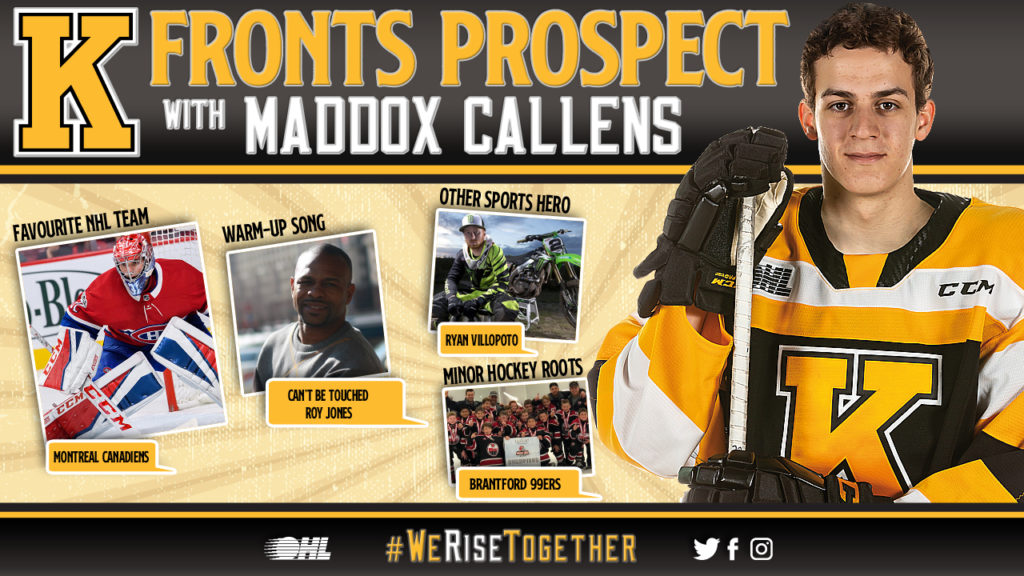 The Frontenacs hockey operations staff wanted to add some goal scorers to their lineup before the 2019-20 season began. The first three picks of the OHL Priority Selection helped reach that goal in a big way.

The third of those picks was Maddox Callens of the Brantford 99ers. Kingston selected him with the first pick of the 3rd round, 43rd overall. Maddox is a left winger from Langton, ON. He played 33 games for the Brantford 99ers Minor Midget AAA team in the AHMMPL last season scoring 25 goals and 27 assists in the regular season. He continued to score at a high pace in the playoffs adding another 10 goals and 7 assists in 14 games.

“Defenses cannot get complacent when Maddox is on the ice.  He possesses a great game breaking skill set that allows him to create scoring chances when he gets the smallest of opportunities.  This is largely due to his awareness, strength, and a hard, accurate shot.”

With the team looking to add more offense, Maddox seemed like a perfect fit for the Frontenacs. When talking about Callens’ offensive zone strengths, Van Leusen added:

“Maddox is always a factor in the offensive zone. He is very strong on his skates, allowing him to be effective on the forecheck, disrupting defenders with hard hits and closing out their time and space with his skating.  When Maddox has the puck, he has very good straight-line speed that allows him to push the pace while having his head up looking for teammates. His most noticeable skill is his ability to shoot and score in a variety of places, whether shooting off the rush, finding soft areas for a quick release or opening up for a one-timer.”

Maddox is a fan of things that go fast on and off the ice. We asked him who is favorite athlete is outside of hockey and he said former AMA Supercross and Motocross champion “Ryan Villopoto”.

Despite being a fan of speed, he still likes to slow things down sometimes, mostly when playing his second favorite sport, golf.

On May 24th, Maddox, along with Shane Wright and Francesco Arcuri, signed Standard Player Agreements with the Kingston Frontenacs and all three will join the Frontenacs to start the 2019-20 season.