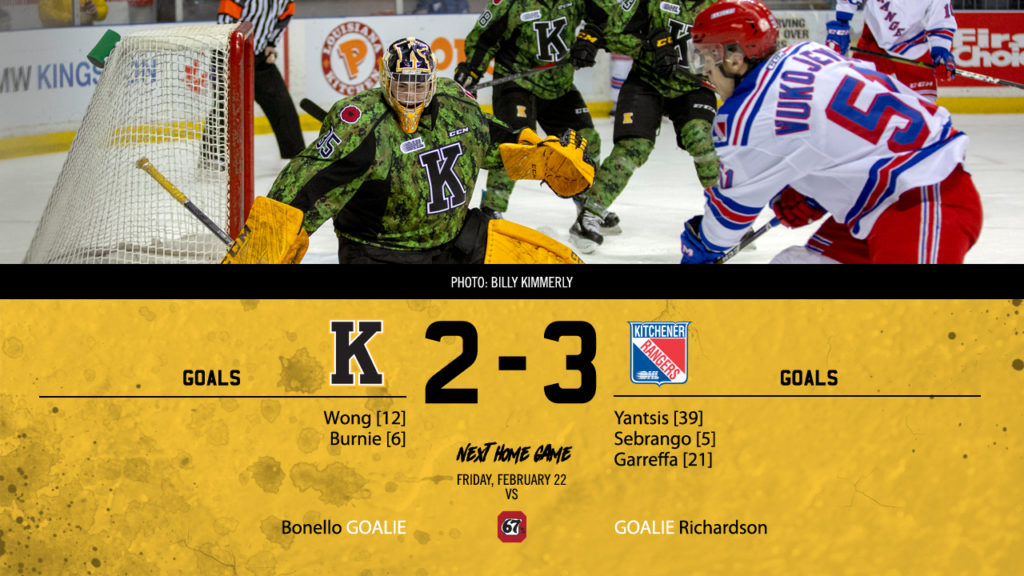 For the second consecutive year the Kingston Frontenacs welcomed the Kitchener Rangers to Leon’s Centre on Family Day. Kingston was looking to repeat last years performance where they came away with a 6-1 victory. The Frontenacs also defeated the Rangers in their only meeting this season. They won that game 4-1 on December 9. Family Day has always been good to Kingston. They entered Monday’s game with a 7-2 record in the annual matinee game.

The game did not start the way Kingston wanted it to. Less than 30 seconds into the game Ryan Cranford found himself in the box for roughing. Kingston was able to kill off the penalty, but Kitchener scored just after it expired. Jonathan Yantsis scored his 39th goal of the season to put his team ahead. It turned out to be the only goal of the period for either team. Brendan Bonello made a couple of saves on good scoring chances that kept his team in the game. Kitchener led 1-0 at the first break.

The Frontenacs got a great shift from Wisdom, Hotchkiss and Wong that resulted in a goal to tie the game early in the second period. Zayde Wisdom got the initial shot away and Nick Wong followed him in to put in the rebound. It was Nick’s 12th goal of the season. Kitchener bounced back and put a lot of pressure on the Frontenacs for the remainder of the period. Kingston native Donovan Sebrango put the Rangers ahead with a puck that Bonello got a piece of, but it slipped through and found the net. Just over a minute later Joseph Garreffa extended the Rangers lead to 3-1. He took a pass from Reid Valade on an odd man rush and made no mistake in beating Bonello. The Rangers outshot the Frontenacs 18-6 in the period and outscored them 2-1 to open up a 3-1 lead heading to the third.

There was no quit in Kingston’s game in the third period. They applied lots of pressure and were rewarded with a goal to make it 3-2. Tyler Burnie used a nice set of hands to find some space and then made a beautiful shot that went in off the crossbar. It fired the team up and then applied tons of pressure in the final minutes. With Bonello on the bench for the extra attacker, Luke Richardson had to make several saves to hold onto the lead for his team. In the end, Kitchener managed to hold on to a 3-2 lead and win the game.

The Frontenacs will take a few days off before hosting the Ottawa 67’s on Friday night. There are just 3 home games remaining for the Frontenacs. They will play 7 of their final 10 games on the road. Tickets for all three games are available at ticketmaster.ca.