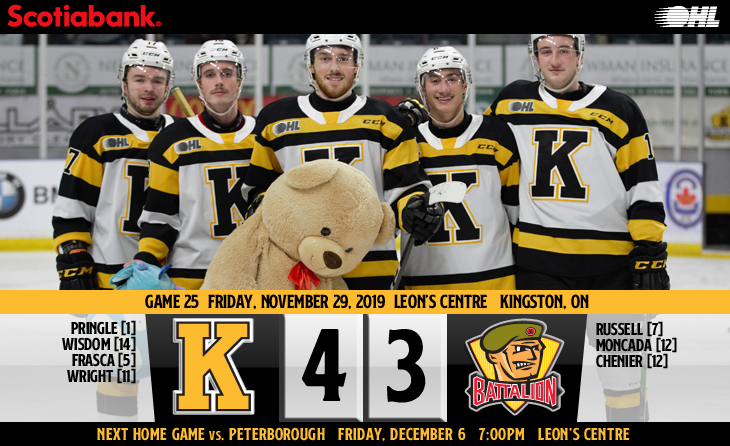 It was the annual Teddy Bear Toss game in Kingston on Friday night. Fans brought their stuffed animals to throw on the ice following the Frontenacs first goal of the game. The bears were donated to the Salvation Army’s Toy Mountain Christmas toy drive.

Christian Propp started for Kingston against his former team. Him and Nick King were both looking forward to the opportunity to get a win against the team they once suited up for.

Unfortunately, it was North Bay doing all the scoring early. They jumped out to a 3-0 lead in the first period. Mitchell Russell, Luke Moncada, and Brad Chenier all had first period goals to put their team ahead early. Fans in Kingston had to wait until the second period to throw their bears on the ice.

Justin Pringle was the player that sent the bears flying this season. Kallaway Mercer sent him in on a breakaway and he beat rookie goaltender Joe Vrbetic for his first goal of the season. It brought the Frontenacs back into the game after struggling in the opening period.

The moment that the game really turned for the Frontenacs was early in the third. Evan Brand and Liam Arnsby dropped their gloves in front of the Kingston goalie. The fight didn’t have a clear winner, but it worked in favour of the Frontenacs.

Zayde Wisdom scored just over a minute later to make it 3-2. He scored to the blocker side of Vrbetic for his 14th goal of the season.

Minutes later Kingston tied the game. Jordan Frasca banged away at a rebound until it found the back of the net. Kingston had completely taken control of the game over a five-minute stretch.

The game appeared to be destined for overtime until the ‘exceptional’ player put his stamp on the game. Shane Wright and Zayde Wisdom played give and go inside the North Bay blueline. Shane ended up on a mini breakaway and he worked his magic to score the game winning goal in the final minute.

Dustin Hutton extended his point streak to 7 games with an assist on the game winning goal. Christian Propp has not lost a start in regulation time since joining the Frontenacs.

The Frontenacs finished their 4-game home stand with 3 wins. Friday night’s victory helped leapfrog the Frontenacs over the Mississauga Steelheads into the final playoff spot in the Eastern Conference.

Kingston will hit the road on Sunday for a divisional match-up against the Oshawa Generals. They return home next Friday night to host the Peterborough Petes. It is Kingston Canadians night at Leon’s Centre. The Frontenacs will wear throwback Kingston Canadians jerseys and Chris Clifford will be honoured with a pregame ceremony. Tickets are available at ticketmaster.ca.

Save of the Year Bracket
6 days ago

The Kingston Frontenacs partner with the Cobourg Cougars
3 weeks ago