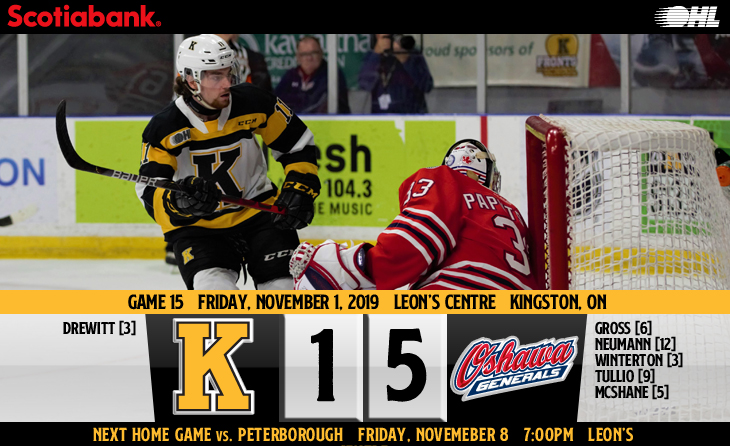 It was going to be an uphill battle for the Kingston Frontenacs before the game even began. Friday night’s game against Oshawa was the first of four that Kingston would play without Head Coach Kurtis Foster behind the bench and without Shane Wright on the ice. Both were in Alberta participating in the World U-17 Hockey Challenge. The generals were also without their first-round pick from last year’s Priority Selection. Brett Harrison was also playing in the tournament.

Kingston skated with the third ranked team in the CHL for the opening period, but they found some trouble when the Generals were on the power play. Nico Gross opened the scoring with a shot from the point that found its way behind goaltender Ryan Dugas. Just under 10 minutes later, again on the power play, Dugas made the initial save but Brett Neumann capitalized on a rebound to give the Generals a 2-0 lead. Kingston fought until the end of the period and it paid off just in time. Luke Drewitt redirected a beautiful pass from Lucas Rowe that snuck over the line to cut the lead in half just before the teams headed to the locker room.

Kingston’s confidence seemed to grow throughout the middle period. After being outshot 19-7 in the opening period, they equaled the Generals at 10 shots each in the second frame. Both Ryan Dugas and Generals goaltender Zachary Paputsakis made key saves to keep the score 2-1. The Frontenacs ended the period short handed after a late period scuffle in the corner. Most of the penalty carried over to the third period.

That proved to be an issue as the Generals power play struck again. This time it was Jacob Winterton striking for the goal. The power play stayed hot with their next chance. Ty Tullio had a wide-open net after Brett Neumann sent a perfect pass for a one-timer that made it 4-1. That goal seemed to sink the Frontenacs. Allan McShane scored a final goal for the Generals that made the final score 5-1.

Ryan Dugas had a strong start in net despite the five goals against. Through the first two periods he made saves at key times to keep the Frontenacs in the game.

Kingston stayed with the Oshawa during 5 on 5 play. It was the Generals power play that won them the game. They were 4 for 7 with the man advantage.

The Frontenacs do not play again this weekend. They make a rare Tuesday night trip to Peterborough to face the Petes before returning home to host the same Petes team on Friday, November 8 for the annual Remembrance Day game. Tickets are available at the box office or at ticketmaster.ca.