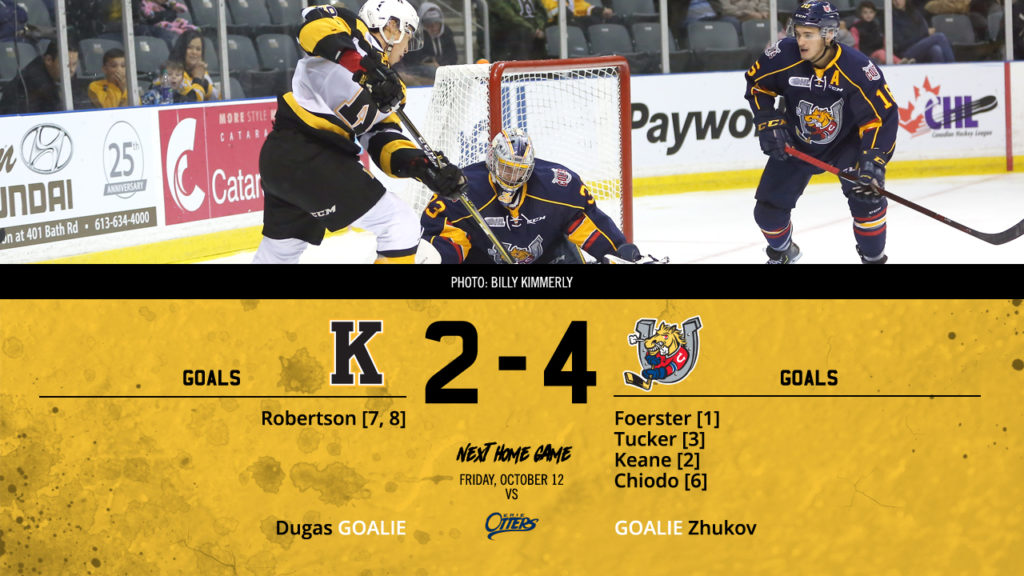 Six months ago, the Kingston Frontenacs and Barrie Colts were battling to be one of the last two teams in the Eastern conference. On Sunday afternoon, they were both looking to get back in the win column. Two goaltenders that weren’t in the league during that playoff series got the start in net. Ryan Dugas was looking to pick up where he left off in his first career start when he recorded a shutout. First year import goaltender Maksim Zhukov was making his 4th OHL start and looking for his second win.

Barrie came out firing early in the game outshooting Kingston 7-2 in the opening 5 minutes. Ryan Dugas looked solid again in just his second career start. The Colts were able to get one by him when Tyson Foerster tipped a point shot that snuck in the top corner. At the other end, Zhukov kept the net clean through the opening period making 8 saves. Barrie outshot Kingston 14-8 in the opening period and led the game 1-0.

Kingston was able to put more pucks on net in the second period. In fact, they more than doubled their first period total. Zhukov continued to look good in net, but Kingston’s premier goal scorer was finally able to beat him as a power play ended. Jason Robertson tucked in a wrap around to tie the game 1-1. Less than a minute after allowing the tying goal, Barrie took the lead back. Tyler Tucker beat Dugas with a point shot that hit the crossbar and went in. Kingston increased their amount of scoring opportunities in the second period, but still trailed by a goal entering the final period.

The momentum was in Kingston’s favor to start the period and they tied the game early. Jason Robertson scored 3:30 into the period for his second of the game and it tied things up at two each. Barrie quickly regained the lead for the second time of the game. Joey Keane scored from the point to put the Colts back ahead. The dagger was a Lucas Chiodo goal that came on a Barrie power play late in the game. With just under five minutes left he one-timed a Ryan Suzuki pass by Ryan Dugas for a 4-2 lead. Kingston couldn’t beat Zhukov again in the game and the Colts took the game by that 4-2 score.

Kingston will hit the road for a mid-week game in Ottawa on Wednesday. They return home on Friday night to host the Erie Otters at 7 p.m. Tickets can be purchased at ticketmaster.ca.