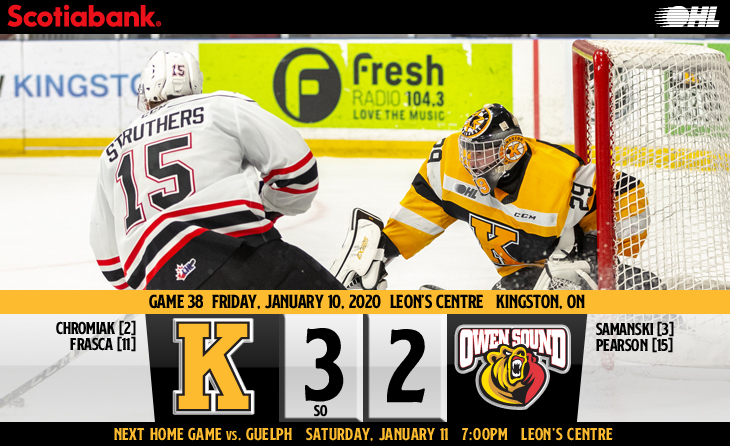 The Frontenacs were looking to sweep the season series against Friday’s Western Conference opponent, the Owen Sound Attack. Kingston won 3-1 in Owen Sound in November. Ryan Dugas was the goaltender that night, and he started in goal for Kingston again tonight. The decision to start Dugas may have been the difference in getting the win.

Owen Sound got a quick start scoring just 30 seconds into the game. Josh Samanski went top shelf with the rebound to put Owen Sound ahead.

The Frontenacs top line evened things up quickly though. Martin Chromiak one-timed a pass from Zayde Wisdom less than a minute later to make it 1-1 less than two minutes into the game.

The Attack took the lead once more when Kaleb Pearson beat Dugas to put them ahead 2-1, but again their lead wouldn’t last long.

Jordan Frasca scored his 11th goal of the season less than two minutes later to bring the Frontenacs even again. It was Frasca’s sixth goal in his last seven games. The period ended in a 2-2 tie.

After multiple goals by both teams, it felt like the game might turn into a shootout. It was quite the opposite. Bothe teams went 0-for-3 on the power play and played the next two periods without a goal being scored.

The Frontenacs had the best chance to score in overtime when former Frontenac Sergey Popov was called for tripping. Kingston possessed the puck well but couldn’t beat Mack Guzda and the game went to a shootout.

Both Nick Wong and Brady Lyle were stopped in the opening round of the shootout. Kingston jumped ahead when Francesco Arcuri scored his fourth shootout goal in four attempts and Ryan Dugas stopped Adam McMaster. Shane Wright had a chance to end the game but Guzda stopped him giving Aidan Dudas a chance to tie it. Dugas wasn’t prepared to face any other shooters and made a calm glove save on Dudas to seal the win for Kingston.

Kingston earned a much-needed win gaining two valuable points on the Steelheads, IceDogs, and Colts in the process.

The Frontenacs take to home ice again tomorrow night against the Guelph Storm. Game time is 7 PM at Leon’s Centre. Tickets are available at the box office or online at ticketmaster.ca.