Fronts Win Streak Ends at the Hands of the 67’s 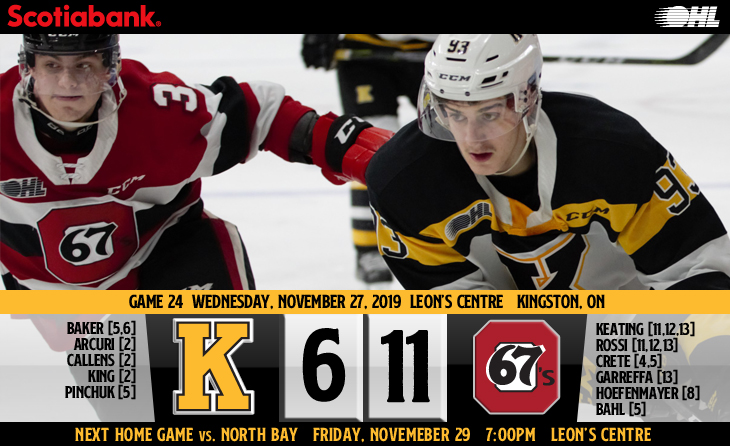 The Frontenacs entered Wednesday night’s game looking to see how they stacked up against one of the top teams in the country. They had won four straight games, including a win over the Peterborough Petes, but the mighty Ottawa 67’s had had their number in recent games. The 67’s also entered the game on a four-game win streak.

Kingston started the game strong. They just missed on their first opportunity to open the scoring when Justin Pringle had his stick knocked off the puck while trying to hit a wide-open net, but they wouldn’t miss on their second chance.

Lucas Peric took the initial shot from the point, but Dawson Baker got his stick on the puck and tipped it by Ottawa starter Will Cranley. The Fronts had just missed on their first opportunity to open the scoring.

Ottawa fought back in a big way after that goal. Austen Keating turned out to be a thorn in the side of the Frontenacs.

He scored the first Ottawa goal after a beautiful passing play by the 67’s. That goal tied the game 1-1, but he wasn’t finished. After Ryan Dugas made a great glove save, he tried to play the puck to his defenceman. The puck was turned over and Keating was able to tap it in to put his team ahead.

Marco Rossi did the final damage of the period for Ottawa. He used a defender as a screen during a 5 on 3 power play and beat Dugas on the blocker side. It gave the 67’s a 3-1 lead after one period of play.

The second period is where the Ottawa 67’s flexed their muscle. They scored five times in the period to stretch their lead. The goals came from Marco Rossi, Yanic Crete, and Joseph Garreffa.

The bright point of the period was when Francesco Arcuri scored his second career goal. Zayde wisdom had the primary assist with Shane Wright getting the second helper.

The goal provided little consolation for Kingston as they trailed 8-2 after the second period.

Despite the deficit, Kingston continued to battle until the end of the game. Dawson Baker and Maddox Callens scored third period goals as the Frontenacs continued to push. Unfortunately, each time Kingston scored, the 67’s answered with a goal of their own.

The Frontenacs made the game interesting as it neared it’s end. Nick King and Vitali Pinchuk made it a 10-6 game. The trend continued though when Kevin Bahl responded to make it 11-6, which was the final score.

The high scoring affair was the second in the row between the two teams. They skated to an 8-7 game on October 14. Tonight’s result made it 32 goals combined in the last two meetings.

The final game of the four-game home stand is this Friday night. It is the annual Teddy Bear Toss game presented by Jack Astor’s. Fans are encouraged to bring a new teddy bear to toss onto the ice following the Frontenacs first goal of the game. All the bears will be donated to the Bell Media and Salvation Army Toy Mountain. Tickets are available at ticketmaster.ca.