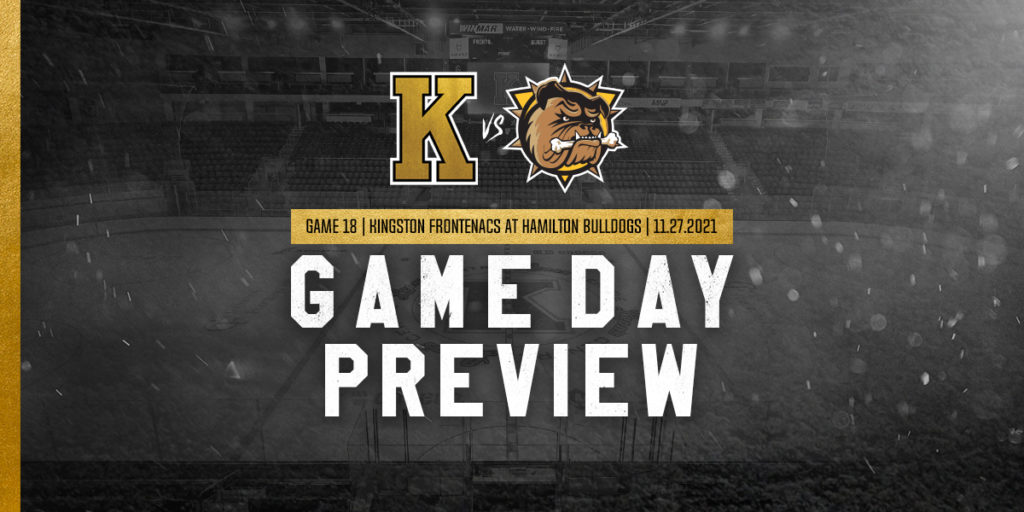 The Kingston Frontenacs travel to Hamilton for the first time of the 2021-22 season to take on the East Division-leading Bulldogs at 4:00 pm. The Black and Gold will look to rebound from a 5-2 loss at home to the North Bay Battalion last night, playing in the second of three consecutive days.

Hamilton (24) sits three points up on Kingston (21) in the division, having played one more game entering Saturday’s action on a three-game winning streak. Both squads can score sitting third (HAM) and fourth (KGN) in team goals and share an identical 3.94 goals per game.

Kingston will need to take their same approach away from Leon’s Centre, which has earned them a respectful road record at 3-1-1-0. The Bulldogs will be no easy task in FirstOntario Centre, suffering only one regulation loss in nine games at home with a 6-1-1-1 record. Montreal Canadiens prospect Jan Mysak leads the Bulldog attack in points and goals with 25 points (15G,10A) and looks to extend a 13-point, five-game multi-point streak (9G,4A) today.

Rookie forward Nathan Poole registered his first OHL goal on Friday night and looked forward to getting back on the winning track. “We just got to stay with our game plan and stack the deck and do the right things. Today (Friday night), I didn’t think we did the things we wanted to, but tomorrow we’ll bounce back, look over the film and be ready.”

The Bulldogs possess one of the best goaltenders in Marco Costantini, holding the third-best goals-against-average in the OHL (2.83), with one shutout serving as the workhorse similar to Meriläinen for Kingston. Meriläinen has the edge in wins with eight to the Bulldogs stoppers’ six.

Hamilton possesses a well-balanced attack, getting points from the blue line with two top-ten scorers. Nathan Staios sits one point back for OHL defenseman points (18), tying for second in the league, while fellow defender Gavin White has 15 points and ninth-overall.

Defenceman Ben Roger made his Fronts debut versus North Bay after a midweek trade from the London Knights.

The next home game is particularly special on Friday, Dec 3, with the Oshawa Generals making their second visit to the Leon’s Centre. The game is the Annual Teddy Bear toss and fans are encouraged to bring a teddy bear/stuffed animal to throw on the ice following the first Fronts goal. The bears will be donated to Salvation Army Kingston Citadel.

Round 2 Matchup: Linseman Bracket
18 hours ago