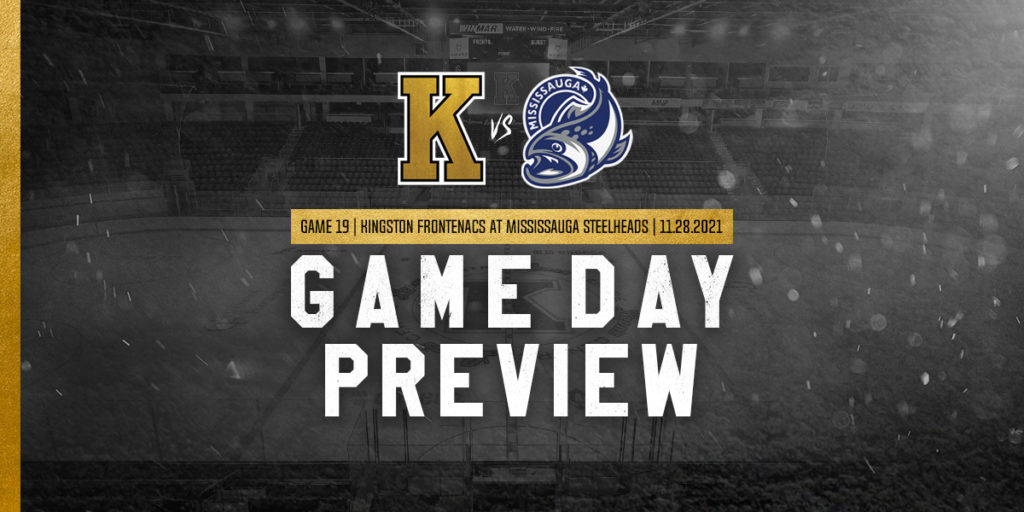 The Kingston Frontenacs (10-5-3-0) wrap up a busy weekend in Mississauga (11-5-1-1) this afternoon in the backend of a three-day, three-game stretch coming off a 5-4 shootout win in Hamilton yesterday, going to an extra frame for an OHL leading seventh time. The CHL’s eighth-ranked Steelheads enter the game losing for the first time in regulation on Saturday to Sudbury, since an Oct 24 4-2 defeat in Hamilton. The fish had earned points in 11 straight holding the Eastern Conference best-winning percentage (.667).

It will be the first time the team’s face-off at Paramount Fine Foods Centre in the fourth matchup during Toys for Tots day. Kingston defeated the Steelheads 5-4 in a shootout in the last matchup on Nov 13 in Kingston during Larry Mavety Day at the Leon’s Centre. The CBC televised game featured a wild six-goal third period tied late 4-4 by Lucas Edmonds with 1:50 left in regulation. Defenceman Braden Hache scores his first OHL goal during the final frame. However, Mississauga holds the season edge with a 2-0-0-1 record with a 3-2 OT win on Nov 3 coupled with a 7-2 win on Oct 9 at Leon’s Centre.

In the five games since the loss to Kingston, Mississauga won four in a row, until the 2-1 loss at home to the Wolves yesterday. Allowing a league-low 42 goals against, Kingston will need their high octane offence (4.00 goals-per-game) versus a home team that has allowed more than two goals only once in their last five games with 1.40 goals-against average. Goaltender Roman Basran has an OHL-best 2.24 GAA with two shutouts. Only Kingston scored more than two goals (during the last Kingston win) versus the workhorse in his previous eight starts. Joe Ranger has also contributed well when called upon with a 4-1 record as both goalies have been a strength for the Steelheads early on.

Fronts netminder Leevi Meriläinen was huge yesterday versus Hamilton, remaining perfect in shootouts (13/13) moving into a tie for third in OHL wins (9).

Kingston scored three times with the man advantage during Saturday’s win in Hamilton and will take their OHL fourth-ranked powerplay(26.3%) to test against the league’s best penalty-killing unit holding an impressive 87.5% efficiency rate. The Steelheads have allowed only nine goals on 72 times shorthanded tying with Flint for the least allowed overall. On the flip side, the Mississauga powerplay sits last in the OHL, operating at a paltry 9.6% with only seven total goals (Kingston has 20 on the PP).