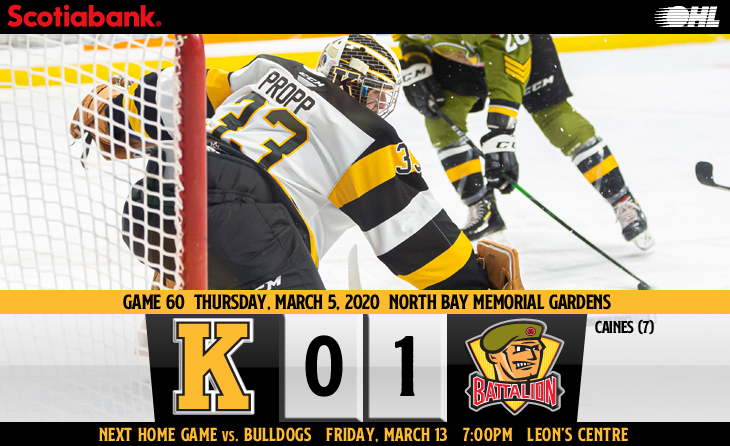 It was a chipped puck late in the game that led to a 1-0 victory for the North Bay Battalion over the Kingston Frontenacs on Thursday night. Christian Propp was excellent earning third-star in a goaltender duel with first-star Joe Vrbetic earning the shutout.

Kingston came into the game tied with Niagara IceDogs for the final playoff spot in the Eastern Conference playing in their fifth of seven straight games on the road. Shane Wright and Francesco Arcuri would see their former Don Mills Flyers teammates Alex Christopoulos and Liam Arnsby in the North Bay lineup.

Some good news on the injury front as rookies Braden Haché (Jan 24) and Maddox Callens (Feb 12) both returned to the lineup after injury rehabilitation. Haché’s return helped boost a defence that was weakened by the loss of veteran Lucas Peric to suspension last weekend. Callens energy will be a great addition to a team battling for playoff position down the stretch.

Wright (39G, 27A 66 pts) sat just 11 points behind Oshawa Generals John Tavares record-setting point total (45G, 32A, 77 pts) for an exceptional status player heading into the game. The recent record-setter for goals by Kingston rookie is only six goals back of Tavares and has already tied Erie Otters Connor McDavid’s 66 point rookie season in 2012-13 in eight less games.

Dawson Baker was the first star the last time the teams met on Feb 29 in a 4-3 win for Kingston at home with Kingston holding a 3-0-0-0 record against the Eastern Conference foes so far this season. Former Battalion members Nick King and Propp, who got the call to start, would play in front of former friends and teammates.

The first period saw the teams have good opening shifts with Justin Pringle getting off a good chance on Vrbetic after solid shift in the North Bay zone by his line along with Arcuri and Lucas Rowe.

Just over five minutes in Vitali Pinchuk made a swift pass to Dustin Hutton off the side of the Battalion crease, but Vrbetic quickly closed the door on the attempt. Kingston held the Battalion attack at bay for the opening half of the frame allowing only one shot on Propp and continued to put pressure on the North Bay defence. Jordan Frasca made a nice steal in the offensive zone leading to another good chance on Vrbetic.

Kingston would kill off the only first-period penalty not allowing any good scoring opportunities including some good play by the newly-returned Hache in front of Kingston’s net. Callens also reintroduced himself to the Kingston lineup with a nice hit on James Mayotte.

Propp made a nice stop with 37 seconds left to keep it scoreless after Luke Moncada found himself with a loose puck in a great scoring area. The teams would head to intermission with North Bay ahead on the shot clock 9-6.

The second period saw the home team force the play while almost going up on a #26 chance, but the shot just missed the post. North Bay did a great job not allowing the Frontenacs easy access to their zone and didn’t allow a shot on goal by Kingston for just over 20 minutes from the 9:45 mark of the first throughout the opening half of the middle frame.

Kingston would have a better back half of the period out shooting the Battalion 9-6 starting with a Callens opportunity at 12:13, forcing Vrbetic to make a big blocker save after the Kingston rookie had found himself in alone on the North Bay goal. Haché added to the physical play of Callens and Baker with a nice hit on Christian Stephens in the Frontenacs zone.

After Kingston failed to score on their first power play, the teams would head to the second intermission still scoreless though both goalies had to make key saves in the closing moments. During the Kingston man-advantage, Propp made a Johnny Bower poke-check save on a Luke Moncada breakaway. Wright just missed the net on a rolling puck with over two minutes left and Propp would make sprawling pad-save during a flurry in his crease with only a minute left.

Kingston would get another power play late as Wisdom drew a kneeing call with eight seconds left sending the Frontenacs to the third on their second power play.

In the first five minutes, Vrbetic and Propp both made good stops but it was the 30th shot on Propp that finally found its way in at 6:50 of final frame. Harrison Caines was able to chip a loose puck over Propp for a 1-0 North Bay lead with his seventh goal. North Bay would play some more stingy defence the rest of the way in the third not allowing many scoring opportunities for Frontenacs shooters. Baker had a good wrist shot deflect of Vrbetic’s glove on Kingston’s best chance to tie it up, but in a game where goals came at a premium, it was the lone marker by Caines that stood up for the win for North Bay.

Kingston would get a late power play with 1:31 left and with Propp on the bench they would have a draw within the North Bay zone but couldn’t get the tying goal.

The win draws the Battalion to within four points of Kingston in eighth place in the conference.

Kingston plays next on Saturday night in the Soo before finishing off the road-stretch in Sudbury on Sunday afternoon.

The Frontenacs next home game is March 13 at 7 p.m. at Leons Centre vs divisional rival Hamilton Bulldogs and OHL fourth-leading point/goal scorer Arthur Kaliyev. Tickets are available at the Leons Centre box office or at Ticketmaster.ca.