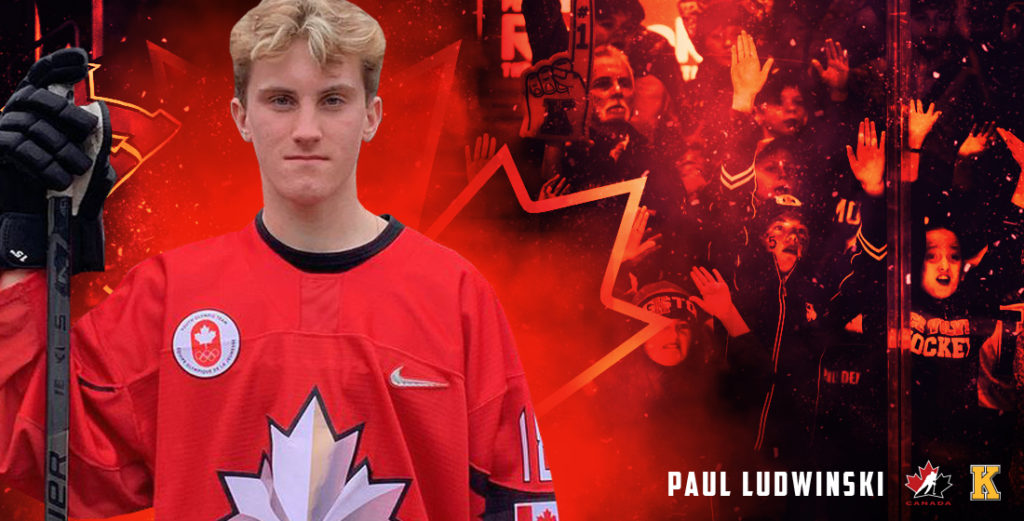 Paul Ludwinski cannot wait to get started, and when he steps onto Leon’s Centre ice for the first time, the roar of the Kingston crowd will not faze him.

The fifth overall pick in the 2020 OHL Priority Selection has spent time in front of loud fans, he has felt the pressure.

Ludwinski represented Team Canada at the 2020 Youth Olympic Games in Switzerland, an experience few incoming rookies have, but one that has accelerated his preparation for the Ontario Hockey League. He also got called up by his country this summer, albeit virtually as part of Hockey Canada’s U17 Summer Development Camp.

Although he has represented the red and white twice, his time at the Youth Olympics stands out.

“It was amazing. We played the USA in the semis in front of 7,000 fans, and everyone was rooting for Canada,” said the Pickering native, “I hadn’t played in an atmosphere like that before, you couldn’t hear the referees whistle.”

Ontario Hockey League fans are known for being passionate for the game. They bring an electric buzz to the arena, which is something that can throw-off rookies, many of whom are used to playing in desolate minor hockey rinks. For Ludwinski, that will not be the case, he has had the big-game experience, and he is ready to take on the OHL.

“That [The Youth Olympics] was the most fun I’ve had playing hockey, and all I’ve heard the Kingston fans can be loud too, so I’m really excited.”

While playing in front of a raucous fan base is one thing, representing the crest on the jersey is another.  Whether it is the maple leaf with Team Canada or soon the Frontenacs emblem, the 16-year-old already knows that the logo on the front of the jersey is more important than the name on the back.

“It is always amazing to represent Canada, it is a dream come true,” said Ludwinski, “I want to represent the World Junior team, but first I’m really proud to be representing Kingston, I think we can have some real success here.”

The Hockey Canada Summer Camp was supposed to be on-ice in Calgary, Alberta before moving online, but even through his computer, the forward learned valuable lessons ahead of his rookie campaign. “It would have been nice to be in person, but even online, we learned a lot. We had skills sessions, sleep and meditation seminars, a whole bunch of things that will really help me as I grow as a person and a player.”

2020 has been a whirlwind of a year for the world, but for the Ludwinski, a fast skating forward, he has had milestones and opportunities that have been unforgettable.

From chasing pucks below cheering fans in Switzerland to taking in virtual sleeping lessons through his laptop in Pickering, Ludwinski is raring to begin his career in the Limestone City.