How a grandparent connection helped guide Jake Mallory to Kingston 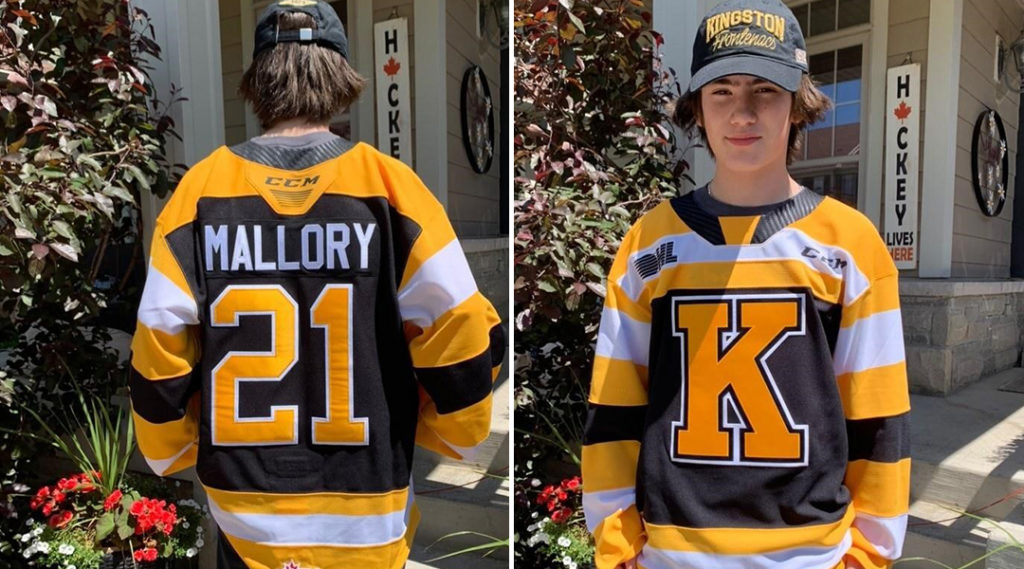 When Jake Mallory heard his name called by the Kingston Frontenacs during the 2021 OHL Priority Selection, he hugged his mom. Before doing anything else, however, he called his grandfather, an integral figure throughout his childhood and minor hockey career.

“He was so happy. I’ve never seen him happier; he was almost dancing,” said Mallory. “With him having bad knees, bad hips and everything, he was hyped and up and moving; it was awesome.”

The Frontenacs selected the right winger 244th overall in the 13th round of the 2021 OHL Priority selection, bringing much-needed levity to the Mallory household, which had sat through the previous 233 selections.

Mallory’s grandfather, Colin Watt, grew up in the United Kingdom, before immigrating to Canada and eventually settling in Kingston. Although Colin never played hockey at a high level when he came to Canada, Mallory’s mother did, and Colin was an integral piece of that journey.

“He [Colin] went through it all with her, and the continued that passion with me.” Through long drives around Ontario, the grandfather, grandson duo got to know each other better than anyone ever could. From the time Mallory was taking his first strides across the ice, to the day he heard his named called by the Frontenacs, Colin had only missed a handful of games.

“He’s like a father figure to me, and for him to be doing this in his 70s is amazing,” Mallory waxed, recalling a moment that stands out to him from minor hockey. “I was playing in a tournament in Detroit, and he and my grandmother showed up there to surprise me, that was really special.”

Whether it was a game near their homes in Milton, Ontario, or a drive several hours away, Colin and Jake have been inseparable. Fuelling Mallory through the years has been Colin’s famous shepherd’s pie, which the two would eat together before game, while talking about the upcoming competition.

With the OHL on the radar for the last few years of Mallory’s time in minor hockey, ending up in Kingston seemed like just a dream. There are 19 other teams, so being drafted to the Frontenacs seemed like a distant possibility.
Mallory has been to Kingston in the past, but hasn’t attended a Frontenacs game. However, his mother used to wave the flags on the ice before the games when she was a child. Having roots in the Limestone City made being drafted by the Frontenacs even better.

“When my family immigrated [From the UK] and came to Kingston, the community was so welcoming to my family, and my family has nothing bad to say about the city,” said Mallory, looking ahead to the next chapter of his life.
A 5’10”, and 165lbs, Mallory has found success just playing his game over the years. However, over the COVID-19 disrupted 2020-21 hockey season, he took on another interest in the game.

“I’ve been diving into more advanced stats,” he said. “I look forward to being able to use some of that stuff in the future and really see it actually put into play.”

With Kingston being a familiar and important community in his family, Mallory is not worried about potentially making the big jump to live with billets, and move away from his hometown. “My grandparents have only ever preached good things to me about Kingston. The great sense of community they have there, of course the amazing hockey,” he said. “I just can’t wait to get started.”

When the day comes that Mallory laces up his skates at the Leon’s Centre, and pulls the black and gold jersey over his head for the first time, he knows where his grandfather will be, watching him from the crowd. “It’s going to be so heartwarming, all the years of hard work and sacrifice that he put in for me, all the drives, all the support. To see it all come together will be amazing.”

Frontenacs win 9-2 over the Petes
2 days ago