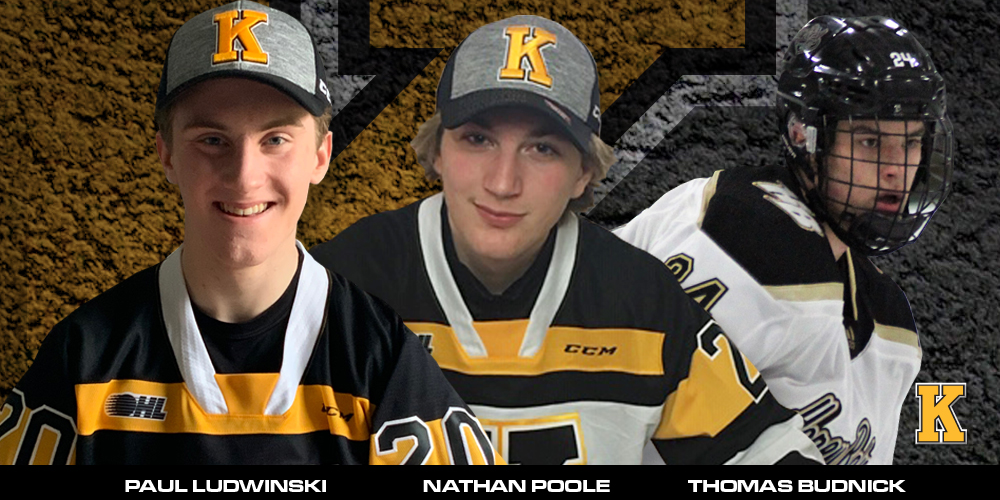 Kingston, ON—The Kingston Frontenacs are pleased to announce the signing of the team’s first three draft picks from the 2020 OHL Priority Selection to Standard Player Agreements.

Paul Ludwinski, a 5’10”, 154 lbs. Pickering, ON native, was the fifth overall pick in the 2020 OHL Priority Selection. Paul served as the captain for the Toronto Marlboros during the 2019/20 season. He is considered to be a player that leads by example and he can contribute on both ends of the ice. Paul put together an impressive season for the Toronto Marlboros. In 31 games played, he scored 15 goals and 17 assists for 32 points.

Nathan Poole was a third round selection of the Frontenacs in the 2020 OHL Priority Selection. He was picked 54th overall in the draft. The 6’0″, 189 lbs. centre was the captain for the Oshawa Generals Minor Midget AAA during the 2019/20 season. The Oshawa, ON native scored 21 goals and added 33 assists for the Generals. Nathan is a determined, relentless, and passionate player that isn’t afraid to play physical. He is a play-making centre that is always looking to make his teammates better.

Thomas Budnick was selected with the 59th pick in the 2020 OHL Priority Selection. Thomas is a 6’1″, 185 lbs. defenceman from the Detroit HoneyBaked 15’s. The Petoskey, MI, USA native is a mobile, puck moving defenceman that plays with a chip on his shoulder. He loves to play physical and he is always looking to become involved in the offensive zone. In 61 games played, Thomas recorded 10 goals and 35 assists for the Honeybaked during the 2019/20 season.

Darren Keily, General Manager of the Kingston Frontenacs, stated “We are very excited about the three young men joining the Frontenacs. We believe each of these high character individuals will be a big part of the franchise moving forward”.

“Our lineup continues to gain depth, but we also have remaining spots available in all positions. We are looking forward to a very competitive training camp”; said Darren.