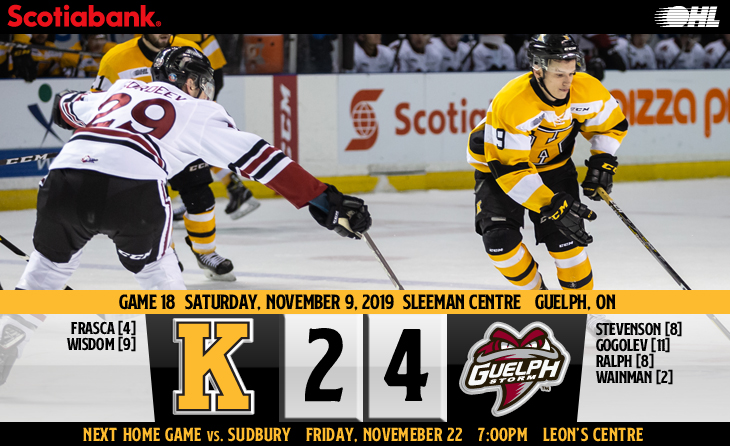 The Kingston Frontenacs traveled to the Sleeman Centre in Guelph on Saturday night and although they were able to get on the board first it was Guelph battling back to win 4-2. Both teams played last night with the Peterborough Petes taking the 4-1 win in Kingston while the Guelph Storm extended their winning streak to five games with a 6-3 win in Kitchener over the Rangers.

Kingston would face a high-scoring Guelph Storm team that had scored more than 5 goals per game over their last five matches (29) while giving up just 11 against over that span. Contrast that with the 24 goals allowed by Kingston with just 11 for and you understand interim head-coach, Luca Caputi, stressing that his team play tighter defence in their own zone and spend more time with possession in Guelph’s.

Tonight’s game was the last the team would play without forward Shane Wright (Team Black) and Head Coach Kurtis Foster (Team Red) as they’ll return from Alberta at the conclusion of the U-17 Hockey Challenge at the end of the weekend. We are extremely proud to have them representing the Frontenacs, their fans and their country and are looking forward to their return.

The game got off to a slow start with nine face-offs in the opening three minutes of play. Kingston scored the games opening goal when Jordan Frasca wired a wrist shot past Guelph starter Owen Bennett making it 1-0 at 6:19. His fourth goal and team-leading 12th point were assisted by Ethan Ritchie and Nick King. It was King’s first point since the trade from North Bay and Ritchie’s second point in his second game of the year. The goal gave Kingston a 1-0 lead for the first time since the London Knights game on October 19th spanning seven games.

The teams both had 11 shots on goal in the first although Ryan Dugas was called upon to make the bigger saves. He made three high-quality saves in close including a redirected shot in the slot of Storm leading-scorer Pavel Gogolev. While Guelph played strong it was Kingston who maintained some pressure and forced the Storm into taking the games first penalty with 10 seconds left in the frame.

At the start of the second, Kingston could not score on the completion of the late first-period penalty call on Guelph though they had three great chances on Bennett. Continued pressure drew another penalty on the Storm and Zayde Wisdom got Kingston the 2-0 lead at 7:45. It was the Frontenacs first two-goal lead since the Ottawa game on Oct.14th. Nick King tallied his second assist of the night on Wisdom’s team-leading 9th goal (13th point). Kingston was playing strong at both ends allowing only two shots in the periods’ opening 10 minutes.

After Dugas made huge saves on Cam Hillis and Gogolev, Kingston’s Lucas Rowe would be called for the first Frontenacs penalty of the game. The Storm took advantage of the power-play quickly, scoring just 11 seconds after the face-off when Keegan Stevenson tipped a shot from the point past Dugas making it 2-1. Kingston would draw another power-play but couldn’t regain the two-goal lead before the second intermission.

Ryan Dugas was forced to make some tough saves early in the third and after a battle in the crease, Nick King was called for a five-minute cross-checking major at 4:23 sending Kingston to a lengthy kill. King was ejected and missing one of the teams better penalty-killers didn’t help the situation. Just over a minute into the power-play, Gogelev scored his 11th on a screened shot tying the game 2-2 at 5:36. Guelph took the 3-2 lead at 7:36 while still on the major power-play with Ralph finishing a tic-tac-toe goal past Dugas.

Josh Wainman scored at 10:40 to close out the scoring 4-2 as Kingston would be handed their 11th straight loss.

Luca Caputi was ejected from the game late in the third after Baker, Rowe, and Gordon were all given misconducts by the officials.

The Frontenacs will play both games next weekend on the road in Kitchener on Friday, November 15th and Owen Sound the following night on the 16th. Both games are a 7:30 PM start time. Kingston’s next home game is on November 22nd against the Sudbury Wolves. Tickets are available at the Leon’s Centre box office or online at Ticketmaster.ca.