More Growing Pains as the Fronts Fall Late to Oshawa 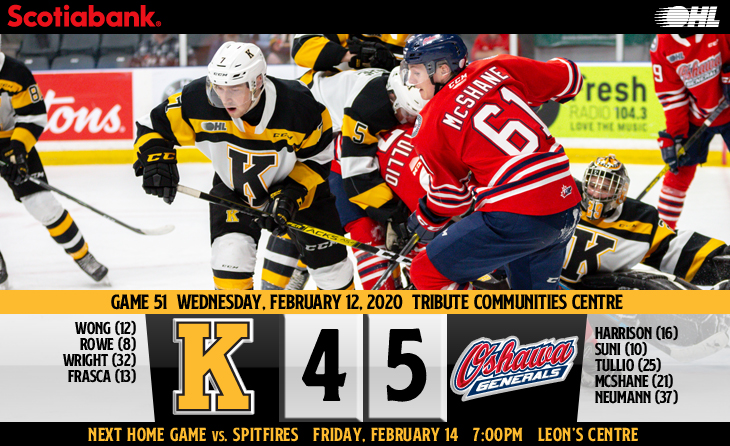 The Kingston Frontenacs may have deserved a better fate on Wednesday night as they fell 5-4 to Oshawa Generals in a game that saw a wild last couple minutes with two goals scored. Rookie Shane Wright had his second consecutive three-point game with a goal and two assists with the General’s Brett Neumann and Allan McShane also contributing three times on the scoresheet.

Kingston Frontenacs paid a visit to division-rival Oshawa on Wednesday night to face the Generals for the sixth time this season. Oshawa is 4-0-0-1 in the season-series so far and leads the goal differential 24 to 12. Former Frontenacs forward Brett Neumann is having an excellent overage season tied with Philip Tomasino for the team goal lead (36).

Shane Wright continues to impress in his rookie season and entered the game on a five-game point streak (6G, 4A). He leads all OHL rookies in goals (31) and points (52). His linemates have also been producing with Zayde Wisdom and Martin Chromiak combining with the young-star to form a dangerous line. Chromiak is also on a five-game streak (3G,7A) while Wisdom comes in riding a four-game point streak (3G, 3A). Jakob Brahaney leads the team in assists and shots helping the Kingston attack from the backend.

Kingston sits one point back of the final playoff spot and with a pending seven-game road trip coming up it’s critical they gain every point possible to try and get ahead of the IceDogs.

The Generals came out with some energy and after getting three shots on goal in the first two minutes it was 1-0 at 4:58 on a Brett Harrison strike. The rookies’ 16th of the year came off a tipped point shot that also had Dugas screened in his crease. Allan McShane and Giovanni Vallati drew assists on the opening goal. The assist by McShane gave him points in eight-straight games.

Kingston then put the pressure back on Oshawa as they took over the middle part of the period firing eight-consecutive shots on the Oshawa goal,  but Jordan Kooy was able to keep the Generals up by one. Rookie Oliver Sunni would put Oshawa up 2-0 at 15:50 finishing a nice three-way passing play. After Kyle MacLean and McShane played give-and-go, Suni finished off a nice backhand pass from McLean by beating the outstretched Dugas.

Nick Wong would get Kingston on the board just over two minutes later at 17:38 when he was able to bang home a rebound after a nice chance by Pinchuk. After taking the puck to the goal on some nice dekes, Pinchuk tried to beat Kooy with a snapshot, but couldn’t hang onto the rebound and Wong was off to the side to make it 2-1 and get Kingston back in the game.

Kingston was able to kill off their first penalty of the period with Jake Murray in the box at 18:02. Dugas would make a huge save on a Generals two-on-one as he completely stretched out to rob the home team of a third goal before the period ended.

Much like the first period, Kingston was able to throttle down the Generals attack allowing only five shots on Dugas.

Lucas Rowe would even things up at 15:45 after he buried a nice setup by Wright. After some zone time by Kingston, Wright was able to take the puck and while he was about to go around the net he backhanded a beautiful pass against the grain for a waiting Rowe who snapped home his eighth goal. The assist by Wright extended a personal point streak to six games.

Kingston only gave up one legitimate scoring chance in the middle frame on only five shots against and still held the shots on goal edge at 28-15.

Oshawa took another lead at 4:32 when Ty Tullio was able to beat Dugas on a broken play that saw Tullio fan on an initial shot that had Dugas go down to make the save and when he tried to get back up, Tullio was able to bank the puck in off the goalie for the 3-2 score. Neumann and Mitchell Brewer had assists on Tullio’s 25th goal on the season.

The game got a little rough in the final frame and Kingston would have to kill off a five-minute major penalty to Dawson Baker starting at 6:20. After Baker had hit Kyle MacLean high the teams would have a scrum in the corner after MacLean came back on Baker. Referees handed out a roughing minor, a check-to-the-head major and game misconduct for Baker after all was said and done.

During the penalty kill, Kingston did a good job of holding off the Generals fifth-ranked powerplay but ultimately couldn’t get away unscathed as Allan McShane would score his 21st from Neumann and Tomasino on only the third shot on Dugas during the man advantage at 9:50 giving the Generals their second two-goal lead of the night.

Kinston, as they have many a game, never gave in and while still on the penalty-kill Wright would score his second shorthanded goal of the season and 32nd of the season from Jordan Frasca just 36 seconds later. The OHL leading rookie scorer fired a low-wrist shot past the glove of Kooy to make it 4-3 at 10:26 and give Kingston back some momentum.

Oshawa would try to negate any Kingston comeback, but ultimately the Frontenacs would put enough pressure on the Generals and for the second consecutive game they would tie it up with the goaltender pulled at 18:46. Frasca’s 13th goal saw him make a nice read as he trailed the play and snuck down to the crease where he from Wright and Nick King to make it a 4-4 game.

However, also for the second consecutive game, Kingston would have a heartbreaking goal against in the final moments. Neumann was able to give the Generals the win at 19:21 as Tullio and Tomasino drew assists on Neumann’s 37th goal.

The game marked the second consecutive three-point game for Wright and he now has a 16-point lead in the rookie race with 52 points and sits first in goals by first-year players with 32 ahead of Peterborough’s Mason McTavish.

Frontenacs coach Foster: I thought we played a very strong game. We didn’t give up a lot, nothing in the second. Even late, we didn’t get up that much. It just seemed like any opportunity they had they got in the back of the net. I hope the guys understand they deserved a better fate. Guys did the little things today well, from beginning to finish guys were tracking really well, back checking, blocking shots, chipping pucks in. All the little things that are principles of how we want to play, the guys did tonight and they bought in. But part of the experience of a young team is learning how to finish games. We have to find a way to win those.”