Nearly Two Years: Frontenacs highlights since the last game in 2020 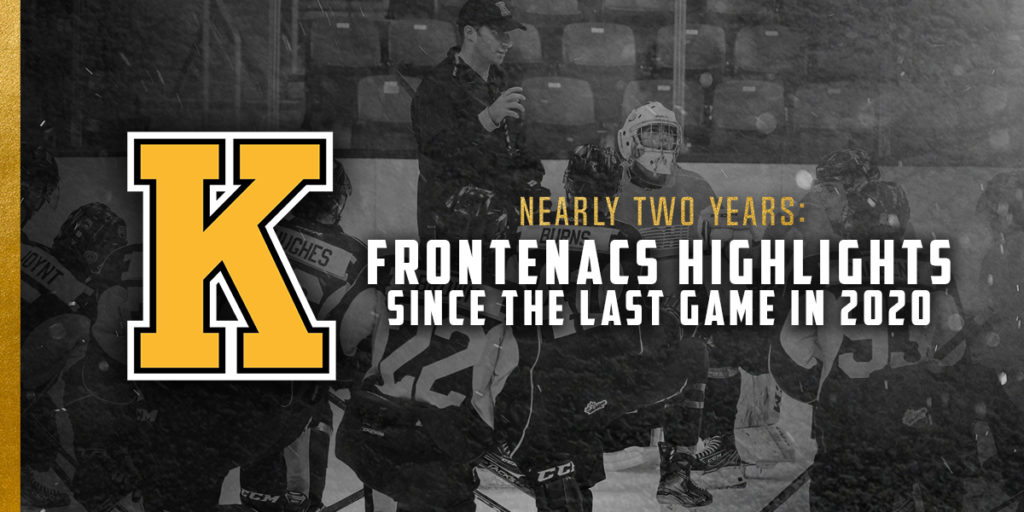 It has been a long time since there was any sort of “normal” around Kingston Frontenacs hockey. On March 12, 2020, the team had new skates fitted for what was supposed to be a hard-fought end to the season and a potential playoff appearance.

Three days after that, the Ontario Hockey League suspended the season until further notice. Unfortunately, further notice of a return never came, as the OHL cancelled the regular season on March 19 and eventually slashed the playoff schedule as well.

COVID-19 had taken over the world, and it had not left the OHL and the Kingston Frontenacs alone. Although the Frontenacs finished the 2019-20 season in the 8th and final playoff spot, they never got to take the ice and attempt to make a championship run with a promising young core.

Since then, a lot has happened. From year-end awards to athlete ambassadors and different initiatives from right here at the Kingston Frontenacs, the last 17 months have been challenging but very memorable.

While the Frontenacs did not get the chance to lace up their skates for an OHL Playoff run, Shane Wright still ended his rookie season with some hardware. On May 14, the 15-year-old Wright got the call that he had won the Emms Family Award recognizing the OHL Rookie of the Year, the same award NHL star Conner McDavid won.

However, Wright’s hardware haul did not end there. The Canadian Hockey League awarded him the Rookie of the Year title, making him only the fourth Frontenac ever to earn a CHL award and the first since Andrew Raycroft in 1999-00.

With a pair of accolades from his 66 point rookie season, combined with another 14 points in five games with Canada at the 2021 IIHF U18 World Championships, the Burlington, Ontario native is bound to have an exciting 2021-22 campaign.

On May 27, 2020, the Ontario Hockey Leagues announced that Shane Wright had been selected as the centre for the first all-rookie team, while left-winger Martin Chromiak was selected to the second all-rookie team.

The OHL all-rookie teams were selected by the league’s general managers.

When the Fronts hit the ice this season, they will be welcoming two classes of draft picks, including back-to-back- top-five selections Paul Ludwinski and Matthew Soto. An already young team in 2019-20, the Fronts will be young and exciting once again, with five draft picks from 2020 and 2021 on the pre-season roster.

Ludwinski, who is poised to make his OHL debut as a 17-year-old, has looked forward to training camp since hearing his name called by the Fronts in 2020. When he was with the Toronto Marlboros in 2019-20, the centreman scored 32 points in 31 GTHL games. Now, without having played an OHL season, he enters his first campaign with the Frontenacs.

Soto enters training camp in a similar position but has not been on the sidelines yet in the organization for as long. The fresh-faced rookie headlines an exciting group of 2021 Priority Selection picks who will try to crack the opening night lineup.

The Tragically Hip will always have a special place in the hearts of the Kingston Frontenacs, especially “Blow at High Dough,” which has blared through the Leon’s Centre speakers on many highlight goals. However, the Frontenacs players have a varied taste in the music they listen to.

In the early summer of 2020, we asked several Frontenacs their favourite tunes, and we got a mixed bag of results. Jordan Frasca listed “Have You Ever Seen the Rain” by Creedence Clearwater Revival as his favourite song at the time, while Braden Haché enjoyed jamming out to “This Bar” by Morgan Wallen.

Dust off those cowboy boots.

Over a year has passed since the Frontenacs shared their favourite songs, but there will be no sweeter sounds than the song that plays when the Frontenacs hit the ice for their first warmup of the season on October 8 at the Leon’s Centre.

2021: Francesco Arcuri and Braden Haché get drafted to the NHL

July 24 will be a day that Fransesco Arcuri and Braden Haché will remember for the rest of their lives. Watching the TV and online NHL Draft trackers at their respective homes, the Fronts pair heard their names called in the sixth and seventh rounds by the Dallas Stars and Florida Panthers.

Both players wanted to keep their eyes away from Draft coverage for most of the day to calm their nerves, and for Hache, the Draft broadcast took their camera’s away at his moment. Not many players out there can claim to be drafted during a commercial break, but for Hache, that is what happened when the Panthers called his name at 210th overall.

While the two only have their rookie season under their belt, they have been working hard on the ice, in the gym and in the community to stay sharp and ready for the OHL’s return this fall and will look to build on successful rookie seasons, now as NHL prospects.

The Dayna Brons Honourary Award is presented in honour of Dayna Brons, the former athletic therapist for the Humboldt Broncos hockey club who tragically passed away on April 11, 2018. Dayna was known for her humility, dedication and kindness and as a regular blood donor she made a meaningful impact in her community. The annual honour is presented each year to the most exemplary Hockey Gives Blood player ambassador.

Zayde Wisdom was named the 2020 recipient of the E.J. McGuire Award of Excellence by the National Hockey League. The award is bestowed annually on the draft eligible candidate who best exemplifies commitment to excellence through strength of character, competitiveness and athleticism.

The North American hockey calendar’s annual rhythm was thrown astray in 2020 due to the COVID-19 pandemic, meaning the NHL Draft Day moments that came in the spring for Arcuri and Haché came in the fall for two other Fronts players.

Zayde Wisdom and Martin Chromiak joined the prospect ranks of the Philadelphia Flyers and LA Kings on Oct. 6-7, 2020, a year and one day before the Frontenacs are scheduled to begin their 2021 OHL season.

For Chromiak, the night was a long one. Sitting in Slovakia, he did not hear his name called by the Kings until 3:00 am. Still, he and his family slipped into sharp attire for the draft even as dusk turned to darkness, as the NHL had sent a camera to capture Chromiak’s instant reaction.

“We watched the first day for almost four hours and the second day was another four again; it was strange seeing us on the TV,” said Chromiak at the time, before going on to score a goal against Team Canada at the 2021 World Juniors

After getting through a difficult and sleepless night, Wisdom heard his name called by the Philadelphia Flyers in the fourth round of the Draft. “I didn’t get much sleep at all,” he said. “It was a long night, and the hours went by like days. It took a while to get to sleep, my mind was racing.”

After scoring 59 points in 62 games as an OHL sophomore, Wisdom joined the Flyers Lehigh Valley Phantoms for 28 American Hockey League games, where he scored seven goals and 18 points in his first pro experience.

The Frontenacs may not have been playing at the Leon’s Centre in the winter of 2020, but for 20 minutes, there was some competitive action. Braden Haché represented the black and gold in the CHL Memorial eCup. While he fell 6-3 to Victoriaville’s Felix Pare, the evening offered some long-awaited competition for Fronts fans.

The Kingston Frontenacs are going to play hockey in 2021-22. The team will begin training camp on Tuesday, August 31, at Leon’s Centre. That’s right: Real-life hockey is going to happen, and you can be a part of it soon.

Although the last 17 months have been difficult, there have been many bright moments for the Kingston Frontenacs and players in the black and gold. While things are ready to get underway, many people have learned new skills and are looking forward to the upcoming season.

To make sure you have an opportunity to be a part of the Frontenacs exciting upcoming season, please visit https://www.myfrontenacs.com/.

Round 2 Matchup: Linseman Bracket
22 hours ago