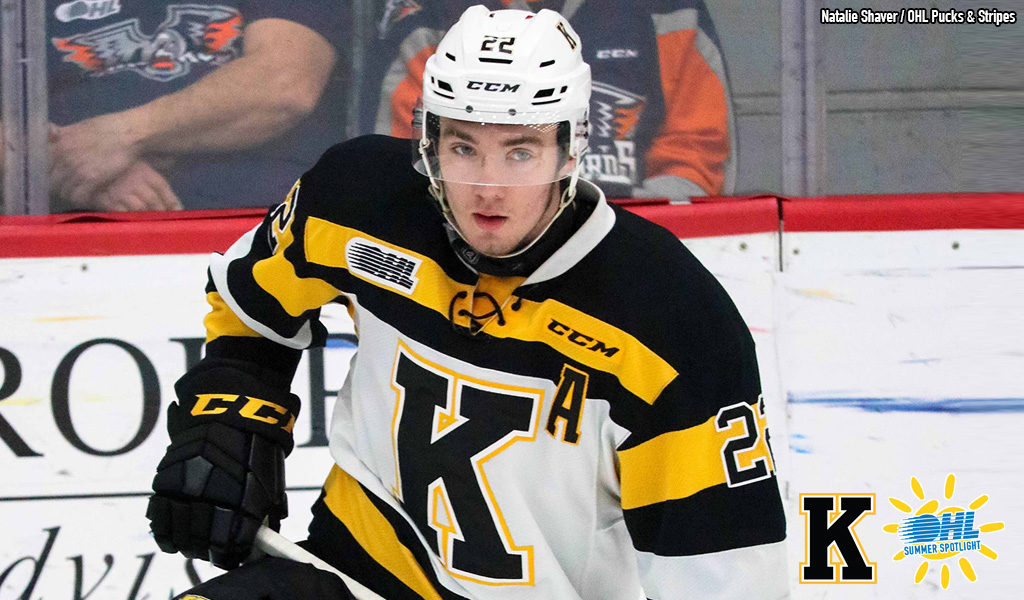 Jakob Brahaney has seen a lot in his four years with the Kingston Frontenacs.

Enjoying the luxury of playing an hour-and-a-half away from his home in Campbellford, Ont., Brahaney has suited up under three different head coaches, helped the Fronts win their first East Division title since 1995 as well as reach their first Eastern Conference Final since 1993.

Considerable success in his first three seasons was followed by a 20th-place finish in the OHL standings in 2018-19, a year that saw a young Fronts squad set a new OHL record with just 144 goals scored. Brahaney saw his ice time increase, but the 14-52-1-1 Frontenacs took their lumps in a rebuilding year that everyone saw coming.

Over 200 games in the ‘O’, and now 20 years on the planet! Happy Birthday @jakobbrahaney! With the graduation of Ryan Cranford, Brahaney is now the active leader in games played as a member of the Frontenacs! pic.twitter.com/lHuasjiQz3

“It was a different season to say the least,” said Brahaney, who attended Vancouver Canucks rookie camp prior to the 2018-19 campaign. “I can’t say it was the most enjoyable, because everybody wants to win, but I think we learned through the lows and enjoyed the highs when they came around.

“What’s most important is how we as a group can respond with a new season in front of us now.”

With overage captain Ryan Cranford joining fellow Fronts grad Matt Hotchkiss across town at Queen’s University this fall, Kingston’s captaincy is up in the air and one would have to think Brahaney is a good bet to earn a promotion after serving as an alternate captain in 2018-19.

Leadership will be important as the franchise enters a new era marked by the addition of exceptionally talented 2004-born forward Shane Wright who was chosen first overall in the 2019 OHL Priority Selection. Brahaney and goaltender Brendan Bonello are the only two 1999-born players on Kingston’s roster entering the month of August.

“I’d say I’m a leader by example first,” said Brahaney of his approach. “I want to show up at the rink, work hard every day and do things the right way.

“I know that these young guys go through experiences that I’ve already been through and I always want them to feel welcome to come and ask me questions about whatever is on their mind,” he continued. “If I can help them in any way I want to be an option, especially with having such a young group this coming season.”

Brahaney projects to be a big part of a developing Fronts blue line that will see 6-foot-3, 188Ib. former 13th overall OHL Draft pick Jake Murray come back bigger and stronger. Fleet-footed puck mover Billy Constantinou recently attended Los Angeles Kings development camp and other 2001-born rearguards in Evan Brand and Anthony Aguanno will be given every opportunity to grow their game.

Former NHL defenceman Kurtis Foster returns for his second season as Frontenacs head coach. Foster ran the defence under past Fronts bench boss Jay Varady who now serves as head coach of the AHL’s Tucson Roadrunners and formed an early connection with Brahaney.

“I thought Foz and I built off the relationship we had together when he was starting as an assistant,” said Brahaney. “He’s a guy you can always bounce ideas off of and he’s got an open door policy. You can always go talk to him and I think he learned from us as well with it being his first year as a head coach last season.”

While the road forward won’t be an easy one for a developing Frontenacs club that has signed three picks from the 2019 OHL Priority Selection, the goal is undoubtedly to make a considerable improvement on last year’s 14-win campaign and push for a playoff spot in the Eastern Conference.

Make no mistake, Shane Wright will be the big attraction in Kingston this fall, but he’ll always have an experienced set of ears in Brahaney just across the dressing room.

Over 20 days in August ontariohockeyleague.com will shine a summer spotlight on storylines from all 20 OHL clubs.  See more from the OHL 20 in 20 series.