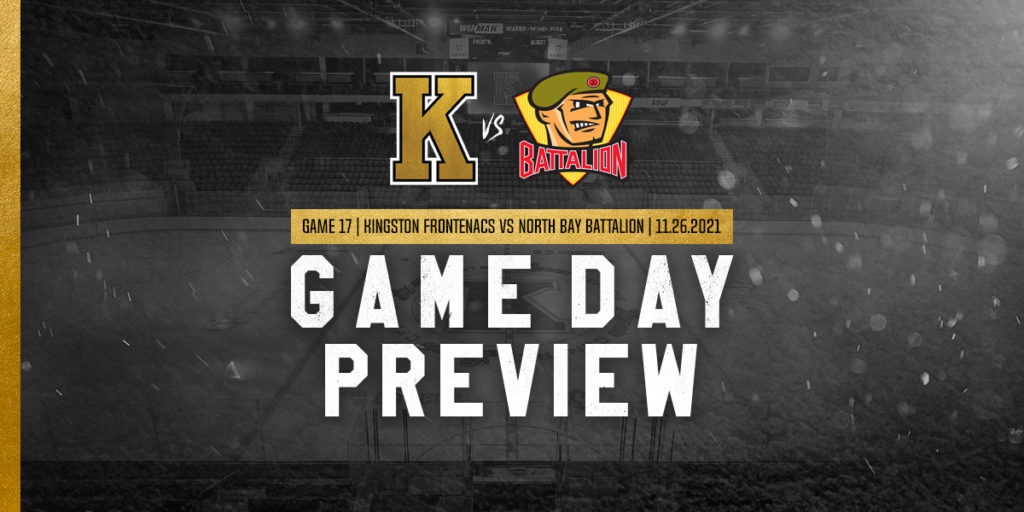 The Kingston Frontenacs take on the East Conference-leading North Bay Battalion for the second time in the 2021-22 season in a Friday night Eastern Conference matchup. Game time is set for 7:00 pm at Leon’s Centre. It’s the first game of a busy weekend that sees the Fronts in action for three consecutive days in the second three-in-three weekend of the season.

The Battalion sit four points ahead of Kingston in the standings but have played four more games. The game also marks the second time the first -overall picks in the 2019 and 2020 OHL Selection square off with Shane Wright (’19) and Battalion defenceman Ty Nelson (’20) on the ice against each other. Nelson had an assist in the first matchup.

Kingston comes in off an overtime loss to Oshawa last Sunday and looks to get back on the winning track against a tired North Bay team that played the night before in Peterborough. The Battalion will come in also looking to change a loss after suffering a defeat on Thursday night 5-3 in Mason McTavish’s return to the Petes. The loss halted the Battalion’s four-game winning streak.

In the first game between the two conference foes, the Central Division Battalion erased two one-goal deficits to beat the Fronts 5-4 Friday, Nov 5 in the Remembrance Day game in The Limestone City. First Star Kyle Jackson had a hattrick (3G,1A) on two powerplay goals, including the game-winner late in the third period with Brandon Coe (3A) and Matvey Petrov (1G,3A) chipping in big games for the visitors. Shane Wright (2G) and North Bay-born Lucas Edmonds (2G,1A) scored a pair of goals in the loss to lead Kingston scoring. Rookie Paul Ludwinski chipped in a couple of assists.

The Fronts came out storming, firing 18 shots on North Bay starter Joe Vrbetic in the first, but the Montreal Canadiens prospect stood tall, making 43 saves throughout the game for the win. Kingston’s Nathan Poole recorded his first OHL point with an assist on Edmonds second goal and had a spirited tilt with the Troops captain Liam Arnsby earning the BMW Kingston Hardest Working Player award.

Kingston was up twice, with Wright scoring the opener just 3:14 into the game and again at 3-2 halfway through the second frame, but a three-goal third by the visitors was the difference in the game. Francesco Arcuri reiterated the club’s need to focus and force teams into a full 60-minute game. “I thought we played well for 40 minutes. It’s a good team out there, and they have some talented players. We have to keep pushing,” he said after the game. Arcuri and Wright will again face off against former Don Mills teammate Liam Arnsby and the brother combo of Alex and Chris Christopoulos.

Frontenacs General Manager Kory Cooper made a splash on Thursday as the club announced they had traded for Ben Roger from the London Knights. The 6-foot-four, 205-pound defenseman will immediately impact a team with aspirations of a Championship run. With the loss of Thomas Burns to the Capital City Challenge until December 1, the move solidifies depth at the backend.

Can Coe be Slowed

Kingston will need to try and slow down the top scorer in the OHL. North Bay’s Brandon Coe leads all point-getters with 36 points and was named to the OHL Team of the Week for NOV 15-21. The San Jose sharks prospect is currently on a nine-game point streak (5G,15A) and has at least three points in four of his last five. Because Kingston has played fewer games than most, the average per-game numbers have Lucas Edmonds leading all OHL scorers at 1.88 points per game.

Forward Matthew Soto and Quinton Burns are gone until Dec 1 while competing at the Capital City Challenge in Ottawa.