Rangers Escape With 3-2 Win Over Fronts 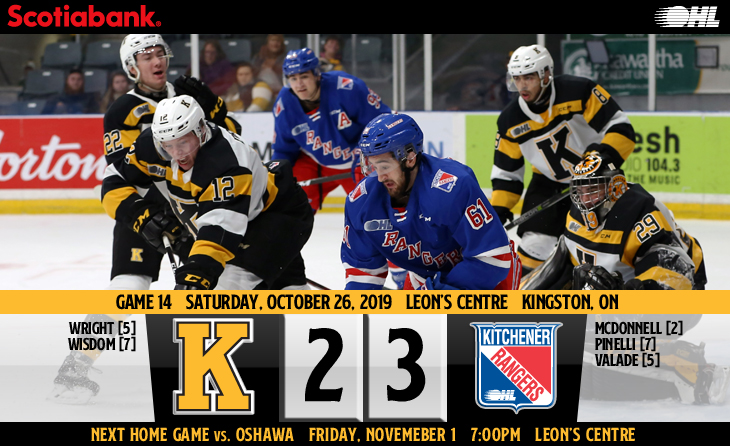 The Kingston Frontenacs faced their second western opponent in as many nights when the Kitchener Rangers wrapped up their eastern road trip. They were coming off a tough loss in Ottawa on Friday night. Kingston also suffered a loss to the Sarnia Sting just 24 hours earlier. Both teams looked to get back in the win column with a rare Saturday night game at Leon’s Centre.

Kitchener had a quick start to the game with an early power play goal by Declan McDonnell. He jumped on a rebound after Ryan Dugas made the initial save. Just over a minute later Francesco Pinelli beat Dugas between the legs for a quick 2-0 lead. The Frontenacs settled down after that and were able to shut the door for the rest of the period, but they couldn’t get on the scoreboard themselves.

They did get on the scoreboard in the middle frame, however. Just after the midway point of the period while on a power play, Shane Wright fired a puck on net that deflected by Jacob Ingham off the skate of a defender. It was Wright’s fifth goal of the season. The Rangers returned the favor on a power play of their own. A point shot was deflected by Reid Valade to restore the two-goal lead. The Frontenacs weren’t having any of that and scored 0:31 later to get back within a goal when Zayde Wisdom beat Ingham with a beautiful shot over the glove. The flurry of late period goals ended with Kitchener ahead 3-2 heading to the third period.

Kingston pushed hard in the third period, especially in the final minutes. The Fronts directed 11 shots on net and only allowed 4 over the final twenty minutes. They played the final four minutes with a man advantage between a power play and an empty net. With seconds left they nearly tied the game but couldn’t put a loose puck in the net. The Rangers were able to hold on to a 3-2 victory.

Zayde Wisdom and Shane Wright’s goals kept them tied for the team lead in points with 11 each. Zayde now leads the team in goals with 7.

The Saturday night game wrapped up action this weekend for the Frontenacs. They will not play again until next Friday night when they host the Oshawa Generals at 7 PM. Tickets are available at the Leon’s Centre box office or online at ticketmaster.ca.