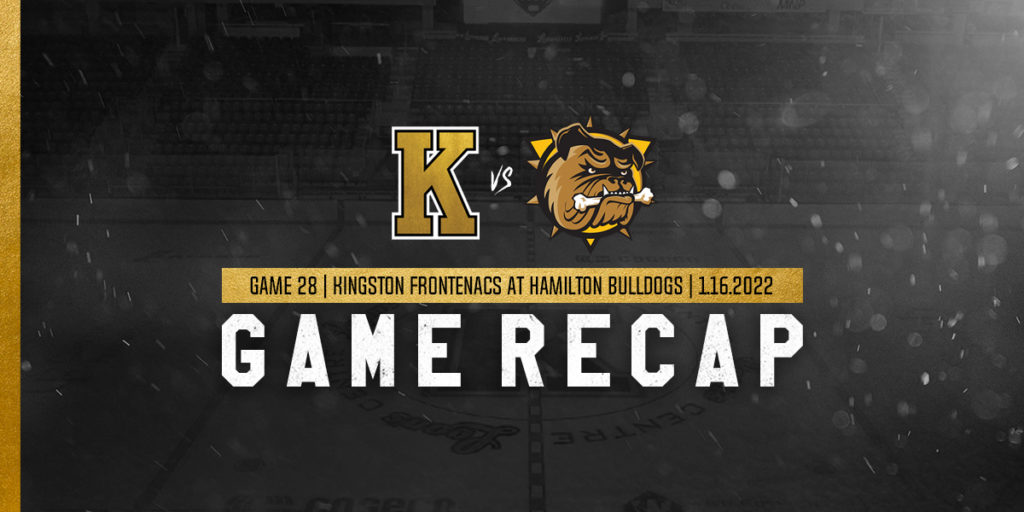 The Kingston Frontenacs (17-8-3-0) were beaten 8-1 this afternoon against the Hamilton Bulldogs for the club’s second regulation road loss. It was the third consecutive loss  falling three points back of the East Division-leading Bulldogs. Avery Hayes and Mason McTavish had three points (2G,1A) and Maddox Callens scored his 11th of the season for Kingston who will look to get back on track on Tuesday night in Oshawa.

Hamilton took a 2-1 lead in the opening twenty minutes in what would be the closest the score would stay over the last 40 minutes of the game.

The Bulldogs took the lead early in the game when Arber Zhekaj (7) slapped a screened point shot past Fronts starter Leevi Meriläinen. Mason Mctavish and Colton Kammerer drew assists on the 1-0 goal just 47 seconds in.

Hamilton got the game’s first powerplay, but Kingston did a good job limiting the Eastern Conference fourth-ranked powerplay to just two shots setting up a Kingston tying goal four minutes later. A pair of rookies assisted on Maddox Callens (11) Kingston’s only goal. Paul Ludwinski made a great play behind the Bulldogs net before backhanding a nifty pass to Matthew Soto in the slot. After Soto’s shot missed the net, Callens corralled the ricochet and buried the rebound to make it 1-1 at 15:04 on the fourth Fronts shot.

The Bulldogs took a 2-1 lead when George Diaco was able to scoop the puck up and wrap it up and over Meriläinen, similar to the Martin Chromiak strike earlier in the season. Humphrey and White got the helpers at 18:17

A third man-advantage for the Bulldogs came with 38 seconds left, and two more quality chances were stuffed by Merialinen, keeping the Fronts down by the single tally heading to intermission with a 14-5 lead on the shot clock. Lucas Edmonds and Arber Xhekaj tangled in front of the Kingston net at the buzzer as the game got more physical, drawing coincidental minors.

The Frontenacs again came out on their heels again before regrouping during the middle portion of the period. However, a three-goal outburst by Hamilton in the closing two minutes of the period sent the home side to a 5-1 lead after 40 minutes.

The middle frame opened with the remaining 80 seconds of the Kingston penalty carried over, and the Bulldogs used it to their advantage, taking control of most of the play during the opening five minutes with four more shots on Meriläinen.

Kingston got their first shot 12 minutes in after the Bulldogs had fired the first eight shots of the period at the Kingston net. Captain Shane Wright was hit by an errant puck in the neutral zone and was forced to leave the game for the duration of the period. He skated off on his own and returned with a full cage for the third period. Kingston had some good chances on Costantini, including Frasca and Callens, with excellent shots the Bulldogs goaltender had to be good on. Nathan Poole made a hard hit on Morrison in the Kingston zone, trying to get a physical presence going.

Cole Brown (6) got the Bulldogs the first of three goals in the last 2 minutes at 18:02 to put the game away. Ethan Sims made a good pass to spring Brown on a breakaway and was able to sneak a puck past Meriläinen for the 3-1 tally. Avery Hayes (17) then took advantage of a bouncing puck in the crease to make it 4-1 at 18:52 before McTavish (8) buried another crease-crashing goal with 2 seconds left to send the Bulldogs to the dressing room with a 5-1 lead after 40 minutes.

It would be 7-1 after Hayes wired a one-timer past a screened Meriläinen and then 8-1 on McTavish (16) second of the game to round out the scoring.

Hardest Worker of the Game

The Frontenacs next game is Tuesday, January 18, in Oshawa against the Generals.

The Frontenacs play two games at home next weekend. The next home game is Friday, January 21, in a rematch with former Peterborough Pete and Team Canada World Junior member Mason McTavish and the Bulldogs at 7:00 pm. The Niagara IceDogs visit the Leon’s Centre on Saturday, January 22 for a 7:00 pm puck drop. 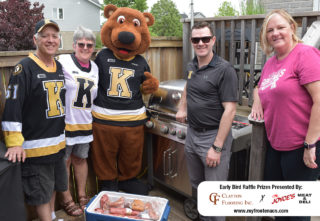 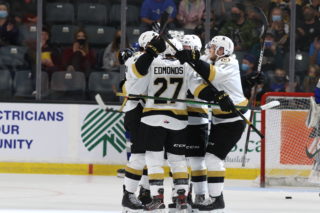 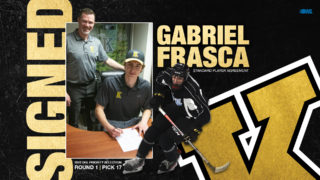 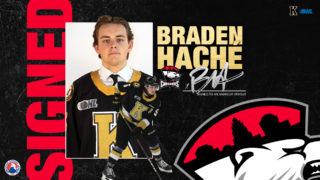 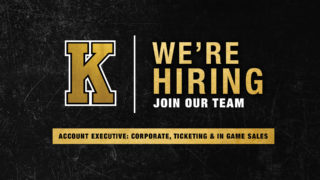