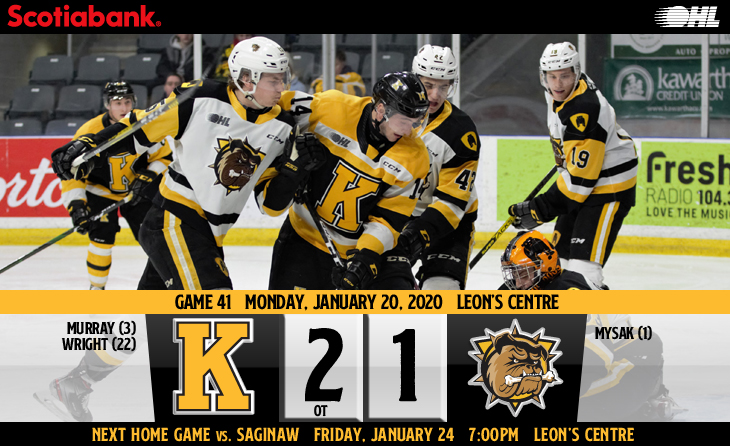 For just the fourth time in franchise history, the Frontenacs took to the ice for a Monday evening game. Their opponent was the Hamilton Bulldogs. The game was a rescheduled date from last Friday’s postponed game. The Bulldogs stayed in Ottawa following their loss to the 67’s on Saturday night and arrived in Kingston Sunday. Kingston was looking to bounce back from an 8-5 loss to the Flint Firebirds Sunday afternoon.

A new face to the OHL opened the scoring for the Hamilton Bulldogs. Jan Mysak tipped a puck in front of the net beating Kingston starter Ryan Dugas. It was the first goal of his OHL career. He signed with the Bulldogs following an appearance with the Czech Republic at the World Junior Championship.

The Frontenacs fell behind on the shot clock early but had some pressure in the later parts. Hamilton starter Mario Costantini had a perfect period sending his team to the dressing room with a 1-0 lead.

It looked like Costantini would keep the shutout going until late in the second period, but while the teams were skating 4 on 4 the Frontenacs broke the seal to tie the game.

Vitali Pinchuk found himself on an odd man rush with a pinching Jake Murray. Pinchuk made a great move and sent a perfect backhand pass to the offensive defensive who put the puck in the back of the net to tie the game. It was Murray’s third goal of the season.

The third period was well played by the Frontenacs. They allowed just 8 shots against while directing 13 on the Bulldogs net. Neither team could beat each other’s goaltenders and the game headed to overtime.

The extra frame didn’t last very long. After Ryan Dugas made a point blank save at one end, Martin Chromiak and Shane Wright went the length of the ice on a two-on-one. Chromiak put the puck on a tee for Wright who fired a one-timer past Costantini for the game winning goal.

It was an important two points for the Frontenacs who made up ground on the idle Niagara IceDogs and Barrie Colts. Kingston is now 3-1 on their current 5 game home stand.

The home stand concludes on Friday night against the Saginaw Spirit. They will then head to Oshawa for a Saturday afternoon game that will be covered by Sportsnet. That is followed by another home game against the Niagara IceDogs on Sunday night. Both home games are 7 PM start times. Tickets are available at the box office or online at ticketmaster.ca.