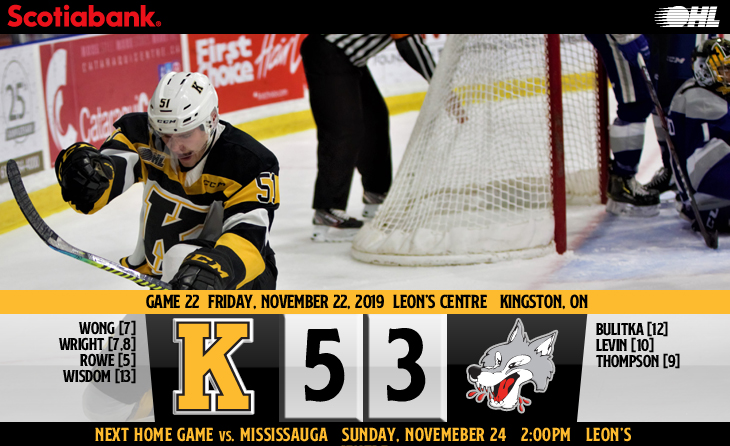 Kingston was flying high after back to back road wins in Owen Sound and Peterborough. They were looking to turn that road success into a win at home after two weeks away from Leon’s Centre. The opponent standing in their way was the Sudbury Wolves led by Quinton Byfield.

The opening period was as entertaining as any we have seen this season at Leon’s Centre. Both teams had early scoring chances but former teammates Christian Propp and Christian Purboo both made some great saves. It was Kingston who would draw first blood.

Luke Drewitt caused a turnover inside the Sudbury blueline. He got the puck to Francesco Arcuri who made a great feed to Nick Wong for a tap in. It was the third straight game Kingston had scored the first goal. In each of the previous two they had given up the next goal, but they changed that on Friday night.

While on a power play, Shane Wright found a loose puck behind Purboo after Zayde Wisdom had hit the post. He tapped it in to give Kingston a two-goal lead.

The Wolves would strike on a late power play as well. Shane Bulitka was able to get the puck to barely cross the line to cut the Kingston lead in half. Despite the late goal, Kingston took a 2-1 lead into the intermission.

The second period was one that made Christian Propp a fan favorite with Kingston fans in his first start at Leon’s Centre. He made two unbelievable saves in less than minutes that drew a loud cheer from the crowd.

Kingston quickly made it 4-1 to open the third period. Lucas Rowe tipped in a point shot that was taken by Nick King. It looked like a safe lead, but Sudbury is capable of scoring in bunches.

David Levin started the come back hopes when he buried a shot from in front of the net to make it 4-2.

Kingston held that lead until 17:40 of the third period when Jack Thompson tapped in a beautiful pass from Quinton Byfield on the power play. It made Fronts fans a little uneasy in their seats.

With the goalie on the bench the Wolves continued to press for the tying goal. Luckily it was Kingston who would score next. After a neutral zone turnover, the puck ended up on the stick of Zayde Wisdom who hit the empty net with just six seconds left to make it 5-3 and seal the win.

It was Kingston’s third straight win but their first in regulation on home ice. It was also their seventh straight at home over the Sudbury Wolves.

Zayde Wisdom recorded a goal and two assists to extend his point streak to five games.

Shane Wright’s two goal game gave him eight on the season and tied him for second in the OHL for goals by rookies.

Friday’s game was the first of four straight games at Leon’s Centre for the Frontenacs. On Sunday afternoon they host the Mississauga Steelheads at 2 PM. Next Wednesday the Ottawa 67’s visit the Limestone City and one week from tonight it’s the North Bay Battalion making the trip to Leon’s Centre for Teddy Bear Toss Night! Both evening games are at 7 PM. Tickets are available at ticketmaster.ca.