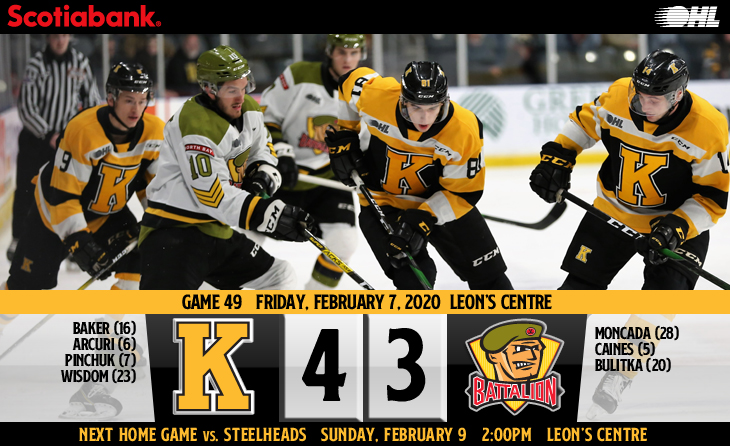 The Frontenacs have been hunting the Niagara IceDogs in the standings over the past few weeks and entering Friday night’s game against the North Bay Battalion, they had the ‘Dogs in their sights. A win over the Battalion would bring Kingston within a single point of Niagara for the final playoff spot in the Eastern Conference. The Battalion, who are not in the playoff race this season, were looking to break a 10-game losing streak when visiting the Frontenacs.

Quick starts were something the Frontenacs had struggled with against the Battalion this season. Although Kingston had won both meetings this season, they were tied or trailed at the midway point of both games. They were able to change that trend on Friday night.

Dawson Baker put Kingston ahead at 13:21 of the opening period. Jordan Frasca sent a puck in front of the net from behind the goal line and Baker picked the blocker side if Joe Vrbetic. Maddox Callens also earned an assist on the play.

Kingston would extend that lead less than three minutes later. Nick Wong flipped a puck high over the head of the defencemen and Francesco Arcuri picked it up for a breakaway. He made a quick move in a small space and beat Vrbetic to double the lead. Kingston took the 2-0 lead to the intermission.

Kingston extended the lead to three at the midway point of the middle period. While on the power play, Jake Murray took a point shot that was blocked in front. The puck landed on the stick of Vitali Pinchuk who found the back of the net with a wrist shot. The Frontenacs were dominating the game and the Battalion would need a lucky break to get back in the game.

Luke Moncada took a shot that deflected high in the air. Jakob Brahaney tried to jump and knock the puck down, but it tipped off of his glove and over Ryan Dugas. The lucky bounce put North Bay on the board, but the period ended with Kingston leading 3-1.

It didn’t take long for that lead to grow in the third period. They had carried over 1:04 seconds of power play time and converted just 0:16 into the period. Martin Chromiak drew Vrbetic out of position before finding Zayde Wisdom who had a wide-open net. Wisdom buried it for his 23rd of the season.

North Bay would continue to battle and cut the lead to 4-2 at 4:48 of the third period. Josh Currie made a perfect pass to Harrison Caines who just had to direct the puck into an open net.

All momentum that North Bay gained from that goal was lost when Caines received a match penalty for slew footing. The penalty was originally called tripping but after a video review was deemed a slew foot and Caines was ejected from the game.

They still made a late push. Brandon Coe had a puck stop on the goal line, but Shane Bulitka knocked it in to make the Kingston lead a single goal.

From that point on Kingston was able to shut the door. In the end they would only allow 22 shots against and took a 4-3 win.

The two points earned brought Kingston within a point of the IceDogs in the Eastern Conference. The IceDogs are in Sault Ste. Marie tomorrow while the Frontenacs host the Steelheads on Sunday afternoon. Tickets are available at ticketmaster.ca.