The Fronts are Left Brokenhearted on Valentine’s Day 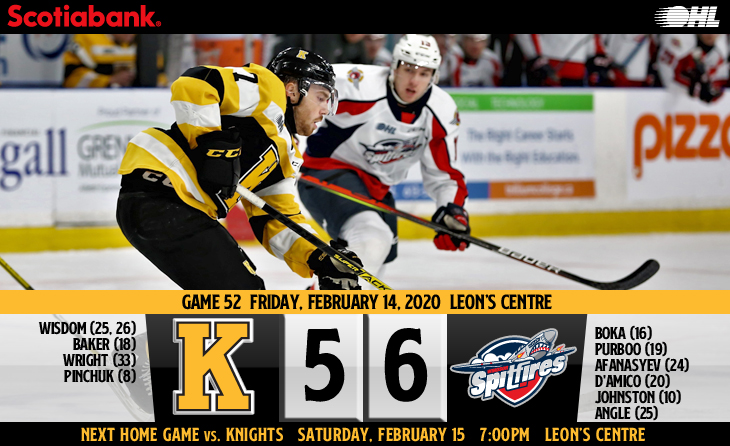 The Windsor Spitfires were able to hang on to defeat Kingston 6-5 Friday night in a high-scoring affair that saw Kingston battle back from three two-goal deficits. Unfortunately a late goal by Windsor in a hard-fought game by Kingston ultimately gave Windsor the road win.

It was a tentative opening 10 minutes for the teams as they got comfortable with each other in the first match-up of the season between the two non-conference opponents. The Shane Wright, Zayde Wisdom, and Martin Chromiak line had a good chance early including a two-on-one that Chromiak couldn’t beat Xavier Medina with a snapshot in the Windsor goal after Wright set him up for the shot.

Dawson Baker made a big hit behind the Windsor goal on Joseph Rupoli five minutes in to get the building going as the teams got more engaged and chances started to come for both sides. Nick King let a shot go that deflected off the side of the post 11 minutes into the frame almost getting Kingston the early lead.

Shortly after Christian Propp made a nice save on Curtis Douglas from the slot, Kingston took the 1-0 lead on a beautiful goal by Wisdom for his 25th of the season. After Wright was able to tip the puck past a Spitfire defender, he passed over to Wisdom who then played give-and-go Wright beating the sprawling Windsor goalie at 14:54 minute mark. The assist extended Wright’s point-streak to seven games.

Hutton was stopped on a semi-break a minute later looking to get Kingston some breathing room but Medina made a nice save to hold Windsor down by one goal. Shortly later, however,  it was 1-1 on a broken play as Luke Boka was able to pick up a deflected puck off Baker’s skate and bank a backhand past Propp at 17:00 minute mark for the tie.

With 30 seconds remaining in the period, Windsor went up 3-1 when Cole Purboo banged home a rebound after a spin around shot by Angle was originally deflected by Purboo who picked up his own rebound for his 19th goal.

Wright and Chromiak had another two-on-one with seconds left but a diving Spitfire defender was able to just get his stick on the saucer pass that Wright had sent over to Chromiak.

It was 3-1 just 1:54 into the middle frame as Afanasyev and Douglas teamed up for Afanasyev’s 11th goal. After Douglas tried to make a centring pass through the crease, the puck deflected off Propp’s stick and right to Afanasyev who put the puck up and over Propp.

The Kingston powerplay had their first opportunity at 2:12 but couldn’t get any sustained offensive-zone time as the Spitfire penalty-killers made it difficult for Kingston to enter the zone. However, it was 3-2 at 4:46 when Baker converted a great pass by Jordan Frasca for his 18th of the season. Vitali Pinchuk made a great play just inside the Spitfire zone and got the puck to Frasca who made a nice cross-ice pass to a breaking Baker who buried a one-time low past Medina.

Kingston would go on their first penalty-kill five minutes in and was unable to hold off the Windsor power play. Daniel D’Amico made it 4-2 at 5:38 giving the Spitfires the two-goal lead for the second time in the game.

The Frontenacs responded with the 4-3 goal at 11:07 as Wright continued his assault on the rookie scoring race burying a nice shot while coming off the rush. The rookie scored his 33rd with a nice shot beating Medina low blocker. Chromiak fed Wright with a nice chip-pass in the neutral-zone after getting the feed from Wisdom to help Kingston again get back to within one.

After Propp made a huge save on a Windsor two-on-one he was tested again seconds later and Windsor would take a third two-goal lead at 12:11. Wyatt Johnston made it 5-3 as he trailed a play that saw Propp make the first save, but couldn’t keep out the rebound from a trailing Johnstone.

Kingston would have another power-play chance at 13:02 but couldn’t convert but just before the end of the period, Wisdom would score his second of the game to make it a one-goal match going to the second intermission. After a falling Wright entered the zone, he was able to chip the puck past the defender. Chromiak then made a nice play to chip the puck past another defender back to Wright who in turn sent a pass to Wisdom immediately firing a shot towards the goal. In a nice break for Kingston, the puck bounced off the back-glass, the net, and shoulder of Medina before falling in for the 5-4 score at 19:40 and the teams headed to the second intermission.

Teams were hesitant to start the third but it was a new game at 5-5 when Pinchuk scored a beauty toe-drag shot at 8:45 that beat Medina high. The goal was assisted by Baker and Frasca. It was Frasca’s second point of the night against his former team. Wisdom would let a good shot go using a defender as a screen to almost put the Frontenacs ahead at 10:59 but Medina made a good glove save.

Kingston was playing stingy defence in the third allowing only one shot in almost 11 minutes of time from the 4:43 mark until up to 15:36 of the period, but after a scramble in the crease, the Spitfires were able to get up a goal with just under four minutes left. Tyler Angle made it 6-5 to finish the scoring at 15:42 with assists to D’Amico and Purboo.

It was another tough loss for the Frontenacs who continue to show no quit in games but still are learning to close them out.

Shane Wright’s goal and two assists gave him a third consecutive three-point game and extended his lead in the OHL rookie scoring race over Mason McTavish of Peterborough to 19 points and a four-goal lead in the rookie goal lead also ahead of McTavish. He has eight goals and 16 points during a seven-game point streak.

Tickets are available at the Leons Centre box office and Ticketmaster.ca.