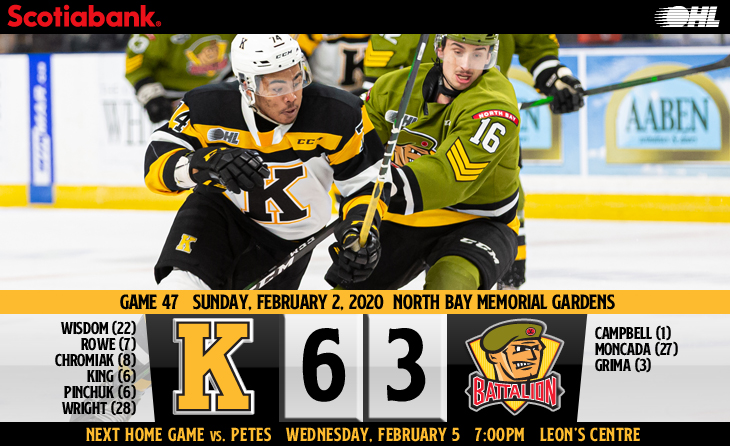 Ryan Dugas was solid and Kingston came away with a hard-earned 6-3 win on Sunday afternoon in North Bay in a great special teams game seeing the Frontenacs score three powerplay goals and holding the North Bay powerplay to no goals on seven opportunities.

After a tough loss in Barrie on Saturday night, the Frontenacs played their third game in consecutive days in North Bay in a matinee affair ahead of tonight’s SuperBowl. Sitting seven points behind a playoff spot and playing a team below them in the standings made the two points critical today. With two games in hand on Niagara, the game today vs the Battalion was of that much more importance to gain some ground on Niagara.

Defenceman Nick King played against his former team for the second time since being traded from North Bay earlier in the season and looked engaged all game long. Shane Wright and Francesco Arcuri would suit up against former Don Mills Flyers teammates Liam Arnsby, and Paul/Alex Christopoulos. Ryan Dugas got the start in goal and faced Joe Vrbetic in the North Bay crease.

North Bay opened the scoring 1-0 at 7:01 on David Campbell’s first career OHL goal. After a deflected pass caused a turnover, Campbell grabbed the loose puck and scored unassisted after letting as wrist shot go beating Dugas against the grain over the glove.

After some pressure by Kingston forced the Battalion to take a puck over the glass penalty they would get their first powerplay and took advantage of the mistake by Arnsby. Wisdom was able to slap home a rebound at 12:26 after Martin Chromiak had let a hot snapshot go that bounced off the goalies’ glove and fell in front of the net where Wisdom potted his 22nd from Chromiak and Brahaney.

Lucas Rowe got Kingston its first lead at 17:57 after he finished off a play that saw Ethan Ritchie create a turnover at the North Bay blueline before getting the puck to Rowe who then played give-and-go with Hutton before burying his seventh to make it 2-1.

The lead was shortlived as North Bay tied things up at 18:26 after Luke Moncada was able to just slip a puck between Dugas pads after taking the puck wide to the goal and the game was tied 2-2 just 29 seconds later.

Moncada had an excellent chance to put North Bay up a goal with seconds left in the period but Dugas made a great stop to send the teams to the first intermission on the 2-2 score.

It was 3-2 for North Bay early in the second after Brandon Coe set up Nick Grima in the slot and he beat Dugas high blocker. The goal coming at 1:10 in combined with the late first-period goal meant a two-goal swing in just 2:44 of play for the Battalion.

Not long afterwards, Brandon Coe was called for interference after a collision with Dugas in the Frontenacs crease and Kingston was able to score their second powerplay goal as Chromiak scored his eighth at 4:19. After setting up in the offensive zone, King and Wisdom combined to get the puck out front to Chromiak who made it 3-3 and the teams would be tied for the third time in the game.

Kingston was called for their second penalty with Hutton sent off for hooking and on the ensuing penalty-kill Dugas made a couple of huge saves including a series of stops spreading out with his glove to keep the score even while on his stomach. As the penalty ended Kingston was caught with a tired line and North Bay had extended time in the Kingston zone but Dugas again was solid.

Nick King would let a rocket go and 9:12 to get Kingston the 4-3 lead. After taking a nice cross-ice pass by Vitali Pinchuk, the veteran rearguard beat Vrbetic cleanly over the glove with a slap shot from just inside the blueline for his sixth goal with Nick Wong also getting an assist with Pinchuk.

Kingston would get in some penalty trouble and found themselves down two-men just after the midway point of the frame as North Bay looked to tie the game up again.  With King in the box, Jake Murray was called on a double-minor giving North Bay a lengthy five-on-three. Dugas made three quality stops while down two-men.  After getting back to five-on-four, Kingston still had to kill off just under three minutes of time to get out of the hole. Again, Dugas made some key saves including a Mitchell Russell stop on a mini-break to give his team back some momentum.

After generating the momentum holding off the lengthy penalty kill, the Frontenacs scored a huge insurance goal just after the penalty ended to make it 5-3 getting some breathing room heading to the third period. Kingston took the two-goal lead at 16:15 as Hutton fed Pinchuk in the slot and he was able to get a backhand past Vrbetic for his sixth goal.

Dugas was awesome in the middle-frame making 16 saves on 17 shots.  It was only three fewer saves than that of the season-high 19 saves in a second period in the Dec 6 game vs Peterborough.

With a two-goal heading into the final frame, Kingston was 8-2-1-1 going to the third period with a lead this season and would need to continue that success rate to close out a big win and more importantly the two-points in the playoff race especially against a North Bay team with one win in 25 games when they trail going into the final period.

Kingston killed off another penalty to Wisdom early in the third as the penalty killers did a good job mitigating scoring opportunities, but Brahaney was called for a delay of game penalty with 21 seconds left in the initial penalty to Wisdom. Kingston would win the draw and effectively kill off the two-man disadvantage before Moncada was called to nullify the remainder of the powerplay. with 1:12 left in the Kingston Brahjaney call.

After some four-on-four time, while on the remaining seconds of the powerplay, Wright skated into a wrist shot at 6:02 and beat Vrbetic to make it 6-3 for his rookie leading seventh powerplay goal and 28th of the year. It was the third powerplay goal of the game for Kingston’s 16th ranked powerplay units. Brahaney and Chromiak drew assists on the play with Brahaney’s 25th helper leading the team.

Kingston went on a powerplay late in the game as North Bay’s frustration looked to start to take over as they took another minor penalty at 16:25 with Nick Grima and Baker having some words and Grima getting the extra penalty.

The win moves Kingston to within five points of Niagara for the eighth and final playoff spot and still have played one less game then the IceDogs. The three-goal powerplay game was the third time this season Kingston hit that mark in a game.

The Frontenacs got multi-point games from Wisdom (1G,1A), Chromiak (1G,2A), Pinchuk (1G,1A), King (1G,1A), Hutton (2A), and Brahaney (2A).  Ryan Dugas was excellent making 33 saves for his eighth win of the season allowing only sixteen goals in his last six games.

The Frontenacs next game is Wednesday, Feb 5 at 7 p.m. at Leon’s Centre vs the Peterborough Petes and Team Canada World Jr winning goal scorer Akil Thomas. Tickets are available at the box office and Ticketmaster.ca.