THE NEW JERSEY DEVILS ON KUJAWINSKI 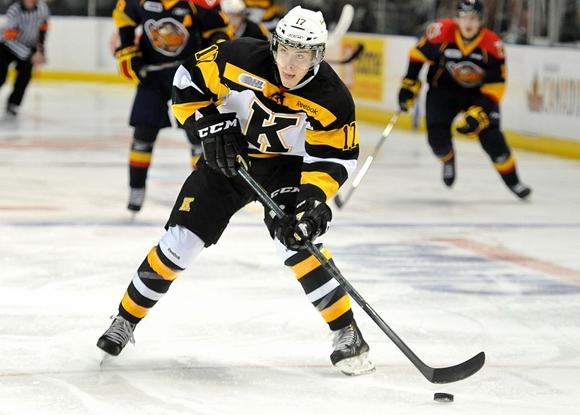 Ryan Kujawinski could not be happier. A native of Iroquois Falls, Ontario, he entered the NHL entry draft knowing he was going to get selected but not when or where to. After garnering attention from his blockbuster trade to acquire Corey Schnieder from the Vancouver Canucks, Lou Lamoriello put all those questions to rest as he called Kujawinski’s name in the third round.

Selected 73rd overall, the left handed centre joined the Kingston Frontenacs in the 2011-2012 season in a trade at the deadline with the Sarnia Sting. This past season Kujawinski was second in team scoring and also put a gold medal under his belt with Team Canada at the U18 World Championships.

The Devils are inheriting a 6’2” solid prospect with an amazing eye for hockey. Kujawinski is fast on his skates and quick with his hands. Although he played centre for the Frontenacs, he might be more suited on the wing for the Devils and during prospect camp. Although various scouting reports label him and inconsistent, it will be interesting to see how the Devils mold this young player into something worthwhile. Kujawinski has the potential to be something big and could be a great asset to New Jersey if handled properly.

The Frontenacs also had another hand in the draft as Finnish forward and team leading scorer Henri Ikonen got picked up by Steve Yzerman and the Tampa Bay Lighting. Going 154th in the 6th round Ikonen just finished up his rookie season with Kingston and is spending the summer at home in Finland.

Round 2 Matchup: Linseman Bracket
15 hours ago