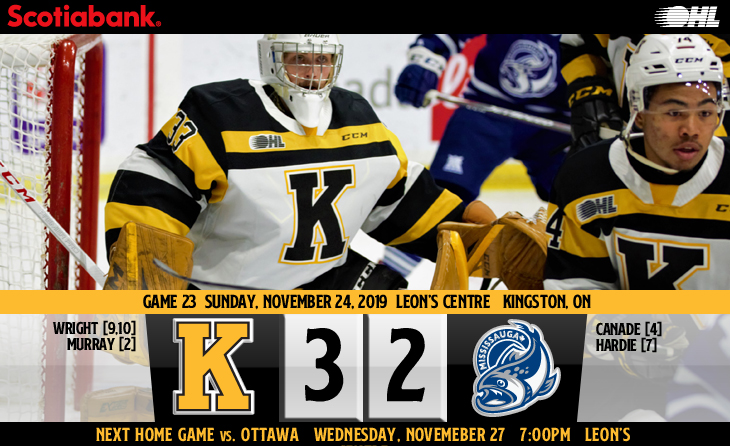 Kingston entered Sunday’s game feeling pretty good about how they were playing. They were winners of three straight games for the first time under Head Coach Kurtis Foster. They also had some rest after taking Saturday off. Their opponent for Sunday’s game, the Mississauga Steelheads, played to a 2-0 loss in Ottawa on Saturday. The teams entered the game separated by just three points in the Eastern Conference standings.

After not scoring in Ottawa the day before, the Steelheads didn’t wait long to get on the board in this game. Nicholas Canade broke the ice just 0:21 seconds into the game. He beat Christian Propp, who was getting his second straight start after a solid game on Friday against Sudbury.

The Frontenacs would settle down defensively and not allow another goal in the period, but they struggled to find offence in the opening period. They were given seven straight minutes of power play time thanks to a match penalty on Canade after a hit from behind on Luke Drewitt. Kingston couldn’t get anything going on the power play and headed to the dressing room trailing by a goal.

Kingston got the offence going just after the midway point of the second period. Jake Murray took a wrist shot from the point that was tipped by Shane Wright in the high slot. It bounced by Steelheads starter Joe Ranger to tie the game 1-1.

Jake Murray continued to create offence minutes later. After keeping the puck inside the offensive blueline, he stick-handled around multiple defenders and buried a backhand shot in the top corner to put his team ahead 2-1.

The Frontenacs outshot the Steelheads 14-11 in the period and turned a one goal deficit into a one goal lead heading to the third period.

The Steelheads took advantage of a questionable call in the third period. James Hardie scored on a penalty shot. He was hauled down on the play, but the players appeared to be side by side and the penalty shot seemed generous. The goal tied the game 2-2.

Kingston didn’t let the tying goal hold them back. At 14:12 Shane Wright scored his second of the game and tenth of the season. It was a one timer off a Jordan Frasca pass. Frasca set up the play beautifully of the side wall.

Kingston wouldn’t allow the Steelheads to score again. Christian Propp made 35 saves. Jakob Brahaney made a great defensive play in the dying minutes to help preserve the win for Kingston.

The win was Kingston’s fourth straight victory and they have claimed 9 of 10 possible points in their last five games. It draws the Frontenacs within one point of the final playoff spot in the Eastern Conference.

The home stand continues Wednesday night when the two hottest teams in the Eastern Conference square off at Leon’s Centre. The Ottawa 67’s, who have also won four in a row, visit Leon’s Centre for a 7 PM start. Then on Friday night Kingston will host the North Bay Battalion for Teddy Bear Toss night, Tickets for both games are available at ticketmaster.ca.