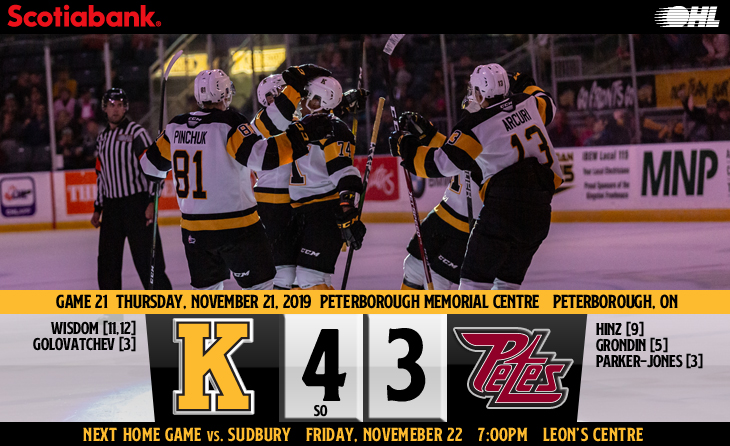 After a successful two-game road trip last weekend collecting three of four points, the Kingston Frontenacs were back on the road against a divisional opponent on Thursday night at the Peterborough Memorial Centre to face the Petes for the third time this season. Once again, the Frontenacs played strong and came away with a huge 4-3 shootout win over one of the best teams in the OHL.  Peterborough, currently ranked 10th in the Canadian Hockey League rankings, won both previous games in a home-and-home on Nov. 5/8 and entered the game one point back of Ottawa for the East Division and OHL league lead.

It was the first of a back-to-back for Kingston (hosting Sudbury tomorrow) but they caught a break as the Petes played yesterday afternoon and traveled back from Hamilton after a 4-3 win. Nick Robertson remained out for Peterborough with a hand injury. Vitali Pinchuk, banged up last weekend, was in the lineup after missing Saturday’s win in Owen Sound. Nick Wong played in his 150th career regular-season game (50 with Kingston).

Heading into tonight’s second game of the year in Peterborough, Kurtis Foster was looking to carry some momentum from last weekend’s trip. “Last week worked well, but we made a couple of adjustments at practice this week that helped us have a better forecheck,” said the head coach on Wednesday. On the Petes, he added: “They played a very fast game, they forecheck well, they had 47 shots for a reason (vs HAM), so hopefully our guys are ready to go because they’re a team that can put up points on the board pretty quick.”

The first period saw the Frontenacs indeed be ready and got off to a quick start scoring just 27 seconds into the period giving them the 1-0 lead for the second consecutive game. Zayde Wisdom buried his 11th goal and 16th point off a rebound when Petes starter Tye Austin couldn’t grasp a Dustin Hutton shot from the slot.  Coach Foster had been looking to get shots and traffic to the net and the goal was a great example. Hutton extended his point streak to three games with the assist.

Kingston would also force Peterborough into a penalty at 2:58 but could not get the two-goal lead and the power play was shortened 22 seconds when Dawson Baker was called for interference. The Petes went to the power play for 1:38 and had some good chances but Ryan Dugas was solid in particular with a right-pad kick-save keeping the lead for Kingston.

The Petes started to put sustained pressure and had five shots in three minutes during the middle of the frame, but Kingston would go on their second power play at 11:57 and gain some momentum back but again couldn’t solve Austin to get up by two.

Peterborough tied the game up 1-1 when they took advantage of the Memorial Centre’s boards as the puck took a weird bounce on a dump-in and came out in front of Dugas and Brady Hinz was able to slap the puck off a defending Hutton’s stick past the surprised Dugas. It was Hinz’ fifth goal in three games against Kingston sending the teams to intermission squared up.

The second period started off with a bang. After Petes Captain Zach Gallant hit Hutton, Lucas Peric stepped in to defend his teammate and the two had a spirited scrap 18 seconds into the frame. Kingston would kill off an instigator penalty to Peric but the Petes would get their first lead 2-1 shortly after at 3:43 with a Max Grondin goal. The teams traded power plays during the middle portion of the frame before Peterborough extended their lead at 16:09 to a 3-1 advantage. After a battle in the Kingston corner, Gallant passed off to John Parker-Jones at the point who threw a low seeing-eye shot towards the net finding its way through a crowd putting the Petes up by two.

Kingston did not panic and kept coming and with just over two minutes left in the period, Wisdom would score his second of the game and 12th of the year, getting Kingston within one goal at 3-2. It was a beautiful three-way passing play that started off after Wisdom picked up the puck at the blueline and began by giving it to Shane Wright in the middle of the ice who dished off to Hutton to his left. Hutton would pass it back across the grain to Wisdom finishing into an open net for his fourth goal and fifth point in a now four-game point streak. Wisdom’s goal put him into the lead for Kingston points with 17 and Hutton recorded his third point against his former teammates this season.

The third period started off slow with nine whistles and five Peterborough icings in the first five minutes with Kingston’s Wisdom having a good chance after centering a pass off a two on one break before the midway point. Kingston would get some pressure paying off at the 11:03 mark when Dennis Golovatchev was able to pick up the puck off an Austin turnover and tie the game at 3-3 with his third goal. After Austin failed to make good on his pass, Golovatchev picked the puck up, turned and fired it past the goalie still trying to set. The teams played it safe as the game went to extra time.

The overtime settled nothing and for the second time in three games, Kingston would go to a shootout marking Dugas’ first time in goal for the one-on-one action this year.

After Dugas stopped the first shooter, Nick Wong put Kingston up in the first round. Rookie Mason McTavish then tied it for the Petes but fellow rookie Francesco Arcuri replied to put Kingston again up after round two. Semyon Der-Arguchintsev did score to open the third round to tie, but it set the stage for Kingston’s Shane Wright to give Kingston the win with a goal. The rookie made no mistake burying a wicked shot past Austin giving Kingston their second consecutive win and third consecutive game with a point. The win moved Kingston ahead of North Bay in the Eastern Conference with 10 points.

Zayde Wisdom was named first star of the night and Ryan Dugas was the third star.

The Frontenacs next game is tomorrow night in Kingston at 7 PM vs the Sudbury Wolves for Mini-Stick night presented by The Home Depot. The Wolves bring top NHL-prospect Quinton Byfield to town after a 6-3 loss in Ottawa earlier today. Get your tickets at Leon’s Centre box office or at ticketmaster.ca.